If the Republican leadership really cared about creating jobs, why all the hate for renewable energy? 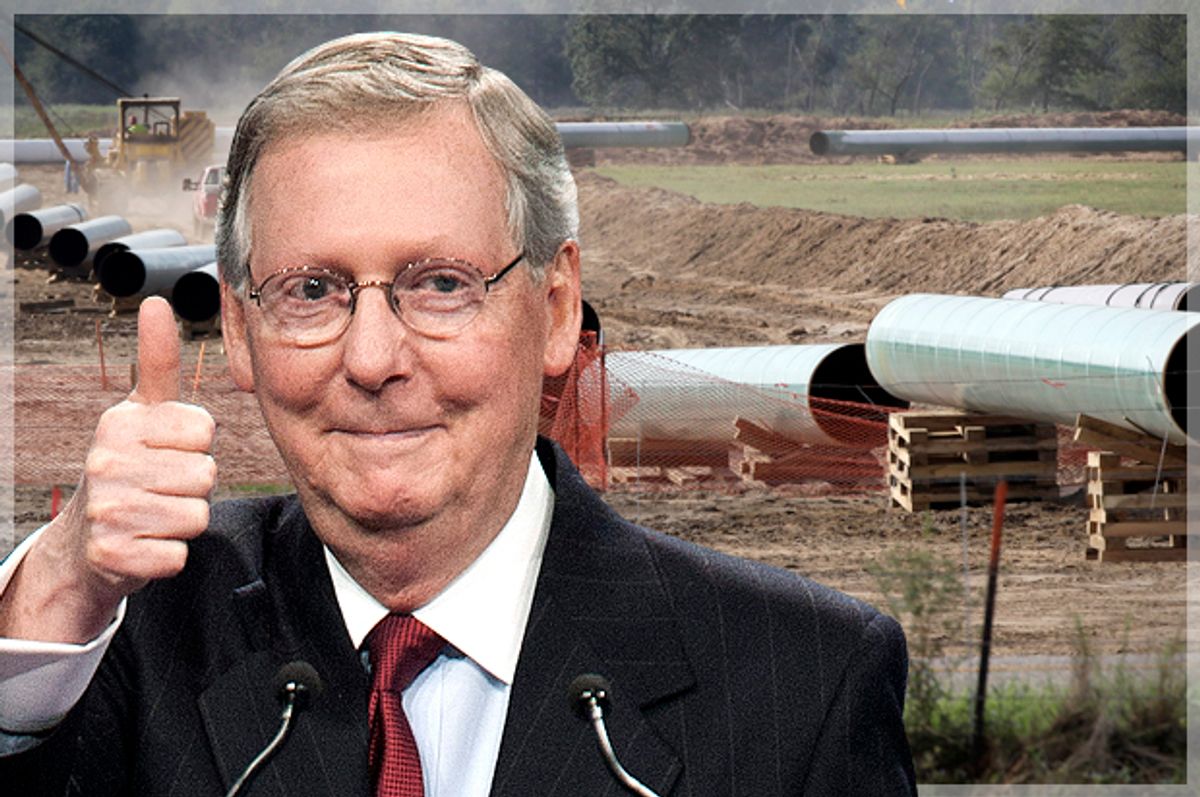 The 114th Congress has gotten off to a ridiculous start, with a massive effort on the part of the new Republican majority to push through a project with no credible benefits — the Keystone XL pipeline — and exposed their many hypocrisies in the process.

It was never true, for example, that Keystone would lower local gas prices, and the fact that the price of oil is now at its lowest level in a decade has rendered that myth more or less irrelevant. Meanwhile, the only way advocates could argue that the pipeline isn't going to have a negative impact on the environment is if they truly don't believe that greenhouse gas emissions contribute to climate change. A major study out just this week made it clear that tapping into Alberta's oil sands would put Canada on track to blow past its remaining fossil fuel "budget." And yet the Republican leadership remains obsessed with the idea of Keystone -- because, they say, they care so much about creating jobs.

Of course, we all know that congressional Republicans aren't really concerned about creating jobs. Because otherwise, they'd be pretty terrible at their own jobs. After all, fighting this hard for a project that would support only 42,000 temporary jobs, and create just 35 permanent ones, must be the least efficient means possible to achieve that goal. As Sen. Barbara Boxer suggested to her Republican colleagues in the Senate Thursday, a much easier approach to creating a whole lot more jobs would be to take up a federal highway bill that's due to run out of funding in four months' time.

But let's take our GOP leaders at their word, and pretend that they actually are interested in putting tens of thousands of Americans to work in energy-related fields. Why not, then, make it jobs in industries that aren't actively working to destroy the climate?

Clean energy -- including the wind, solar, energy efficiency and public transportation industries -- created nearly 80,000 jobs in 2013, according to a report from the nonpartisan business group Environmental Entrepreneurs (E2). “This isn’t unicorns and pixie dust -- these are real American jobs," Bob Keefe, the group's executive director, told Salon. “These are industries and workers that are deserving of attention just like any other jobs.”

But federal and state leaders' unwillingness to commit to providing strong, consistent support to the industry threatens both those jobs and further growth. Nowhere is this seen more clearly than with wind power, which relies on a 2.2 cents per kilowatt-hour federal production tax credit (PTC) for getting projects off the ground. Continual congressional grappling over whether to support the credit results in an on-again, off-again pattern of expirations and renewals, with new wind installations -- and thus, jobs -- dropping precipitously in off years. Uncertainty alone about whether the credit will be extended is a job-killer: At the end of 2012, when the PTC's fate was unclear, E2 tracked 3,200 layoffs in 17 states. When the credit did end up being renewed, the beginning of 2013 saw a subsequent spike in job announcements.

Congress allowed the federal wind PTC to expire at the end of 2013, and then retroactively renewed it in the final weeks of 2014 --  a move that Steve Clemmer, the director of energy research and analysis with the Union of Concerned Scientists (UCS), called "laughable." Wind projects, Clemmer explained, can take as long as two years to develop; the extension could only apply to them if they managed to cobble something together in the two weeks before the calendar year ended. (A bill to extend the PTC through 2015 stalled in the Senate back in May.) Consequences of the fact that most of 2014 was spent without a tax credit were borne heavily by the wind industry; by the third fiscal quarter of the year, only 5,000 jobs had been created, less than half the amount as 2013.

The PTC "has really been a success story over the longer term," Clemmer told Salon, helping wind capacity spread dramatically throughout the U.S. But, he added, the boom-bust cycle is damaging: "These one- or two-year extensions and expirations really don't provide that certainty and predictability that the industry needs."

A lot of that predictability could come from the wind industry trusting it could rely on federal support — just like, say, fossil fuel companies, which receive billions each year in federal tax breaks and other incentives, do. But many congressional Republicans (those representing wind-heavy states, like Iowa, being notable exceptions) appear to see renewable energy jobs as less-than. And they're egged on by Koch-affiliated groups like the American Energy Alliance, which last November wrote a letter to congressional Republicans urging them to allow the wind PTC to expire as, basically, a way of raising a giant middle finger at Obama.

“Rejecting efforts to extend the PTC is a meaningful way for this Congress to oppose the president’s climate plan,” their letter read. “A vote for extending the PTC is a vote for the president and the majority leader’s agenda.” No amount of job creation, it would appear, could compete with that; indeed, it seems to be worth placing existing jobs in jeopardy.

Once upon a time (circa 2009), there was talk of Congress passing a national renewable electricity standard, which would require utilities to generate a certain percentage of their power from renewables (and which has been successfully implemented in 28 individual states and D.C.). At the time, the Union of Concerned Scientists estimated that a mandate calling for 25 percent renewables by 2025 could create 297,000 new jobs in manufacturing, construction, operations, maintenance, agriculture, forestry and other industries.

These days, it may be too much to hope that they don't mess up the policies we've already got. The EPA's Clean Power Plan, the finalization of which the agency just pushed back to mid-summer, is an important potential boon to renewables: An analysis from the Natural Resources Defense Council found that strong implementation of the plan on the the state level could, along with slashing greenhouse gas emissions and saving consumers lots of money, create 274,000 direct energy efficiency jobs by 2020. It also happens to be at the top of the list of things the new job-loving, Republican-led Congress says it's determined to destroy.