They'll come for "The Daily Show" next: Why satirists always threaten fundamentalists

Satirists always enrage fundamentalists. That's why they are so essential, and why we must defend them so fiercely 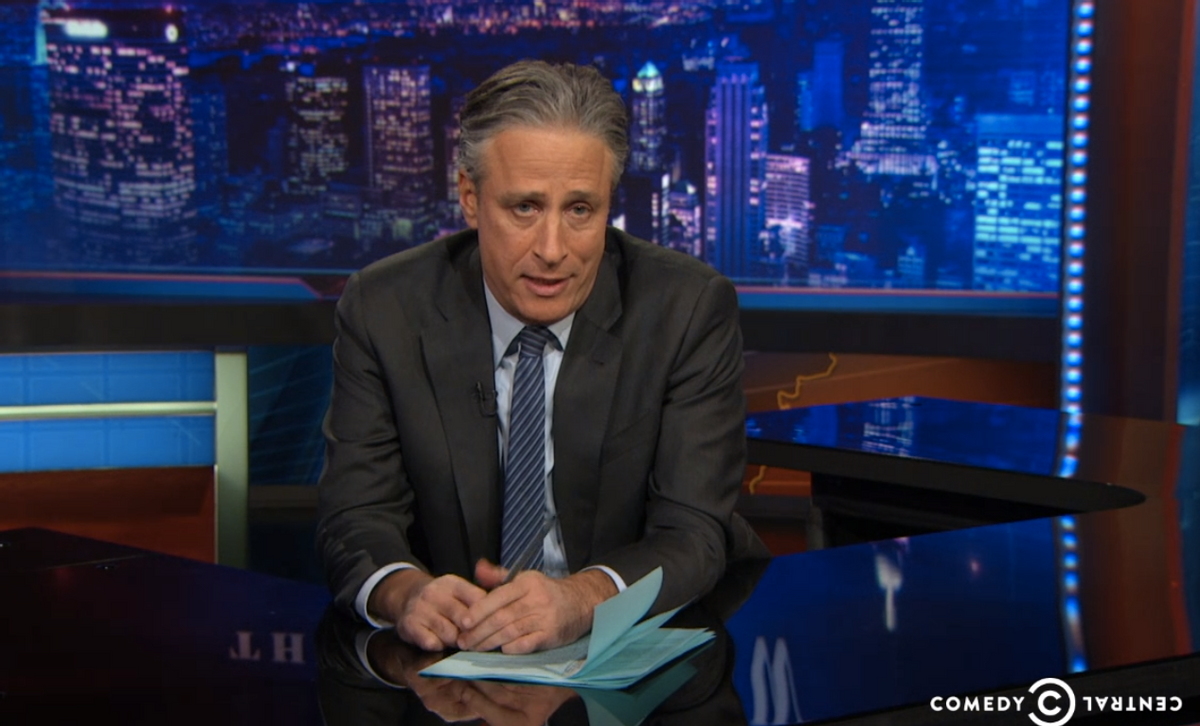 Recently we’ve seen a number of signs of the power of satire.  First Egyptian satirist Bassem Youssef was forced off the air when the MBC network claimed that he might influence the Egyptian elections. Then Jon Stewart released “Rosewater,” a film about an Iranian journalist imprisoned over a misunderstanding of satire. Then the Chinese government decided to ban puns, claiming that they breach “the law on standard spoken and written Chinese” and “make promoting cultural heritage harder.” Next was the alleged North Korean cyberhacking of Sony Pictures over the satirical film “The Interview,” leading many theater chains to initially decide not to show the movie.  But obviously nothing matches the viciousness of the recent massacre at the French satirical magazine Charlie Hebdo, which left at least 10 staff members and two French policemen dead along with a number of others wounded.

What all these events have in common is the way that they prove the power of satire: its power to frustrate and enrage those who feel criticized by it; and its power to spark public debate over the issues it raises.  In a moment in time when much public discourse has been galvanized around simplistic and divisive talking points, satirists tend to muddy the waters and ask their audience to think of things from a different view.

The attacks also signal another trend: The rise of fundamentalism and the rise of satire are intricately linked. Many have observed that this is the age of satire, noting the power and influence of comedians like Jon Stewart, Stephen Colbert and John Oliver, but it is less known that this is a global trend. In addition to Egyptian satirist Bassem Youssef, for example, Iraq has an anti-ISIS parody show, and Chinese TV has its own version of “The Colbert Report.” In each of these cases, the satirist is aiming at fundamentalist, dogmatic ways of thinking. But their weapons are jokes, cartoons, parodies and puns. Not Kalashnikovs. And the difference couldn’t be greater.

This is why we have to avoid reactionary responses to the attacks. Were the Charlie Hebdo cartoons too over the top? Did the satirists provoke these attacks? Is it time to step back and encourage more civility? Watch as the media spins this. At some point the question will be asked: Did they have it coming?

Using satire is not reckless, and while it might attempt to provoke a response, it can’t be blamed for the violence others use to try to stop it.

So as we debate the power of satire in the wake of the massacre, the conversation should not be over whether the cartoonists went too far; rather it should focus on why satire is so often perceived as threatening. And why do satirists take such risks when they know that at times their “jokes” could get them killed?

One of the greatest risks satirists take is the use of irony as a weapon against false logic, faulty reasoning and dogma. Irony is a highly complex form of communication since it never directly says what it means. It uses puns, caricatures, sarcasm and parody to “hint” at its point. If the audience “gets” it, then they are in on the joke; if they don’t, though, they can often feel mocked or even bullied.

This is why satire and fundamentalism are like oil and water. Satire requires some of the highest functioning of the brain; while fundamentalism -- especially terrorist fundamentalism -- runs on fear and anger. The more the satirist sees fundamentalism, the more they want to call it out. But their tools infuriate those that think in stark, binary, dogmatic terms.  Even in the U.S., where satirists have been spared violent attacks, they still regularly draw the ire of those they parody.  Recall, for instance, the time that Rush Limbaugh “freaked out” when he heard that Stephen Colbert was taking over for Letterman -- and that was just over a TV show.

Satire’s goal is to encourage critical thinking, to foster debate over issues of public concern, and to challenge the status quo.  And for those reasons it will always bother those who hold dogmatic views.  But moderates won’t respond with violence, even if they don’t agree with the joke. This is why, for instance, there are countless examples of statements from members of the Islamic community, who clearly disliked the Charlie Hebdo cartoons, but were outraged at the attacks. In fact, a Twitter hashtag was started to reflect their need to distance themselves from them: #NotInMyName.

Some are wondering if this is a time for satire to tone it down. Some will wonder if the attacks were actually ignited by the satirical cartoons. But, regardless of one’s thoughts on the cartoons themselves, it has to be remembered that no one should die for drawing a cartoon. If there is a social ill for us to address it is not the cartoons, but rather those who believed murder was an appropriate response to them.

The attacks proved the power of satire and they proved its risks. They also are revealing, through the responses of millions, a global commitment to free expression. The global outcry of support-- “Je suis Charlie” (I am Charlie) -- may well be the best way to attack the mind-set of those who use bullets to disagree with artists.