The plight of the bitter nerd: Why so many awkward, shy guys end up hating feminism

MIT professor Scott Aaronson wrote a post about how feminism makes him feel like a monster. Here's what he meant 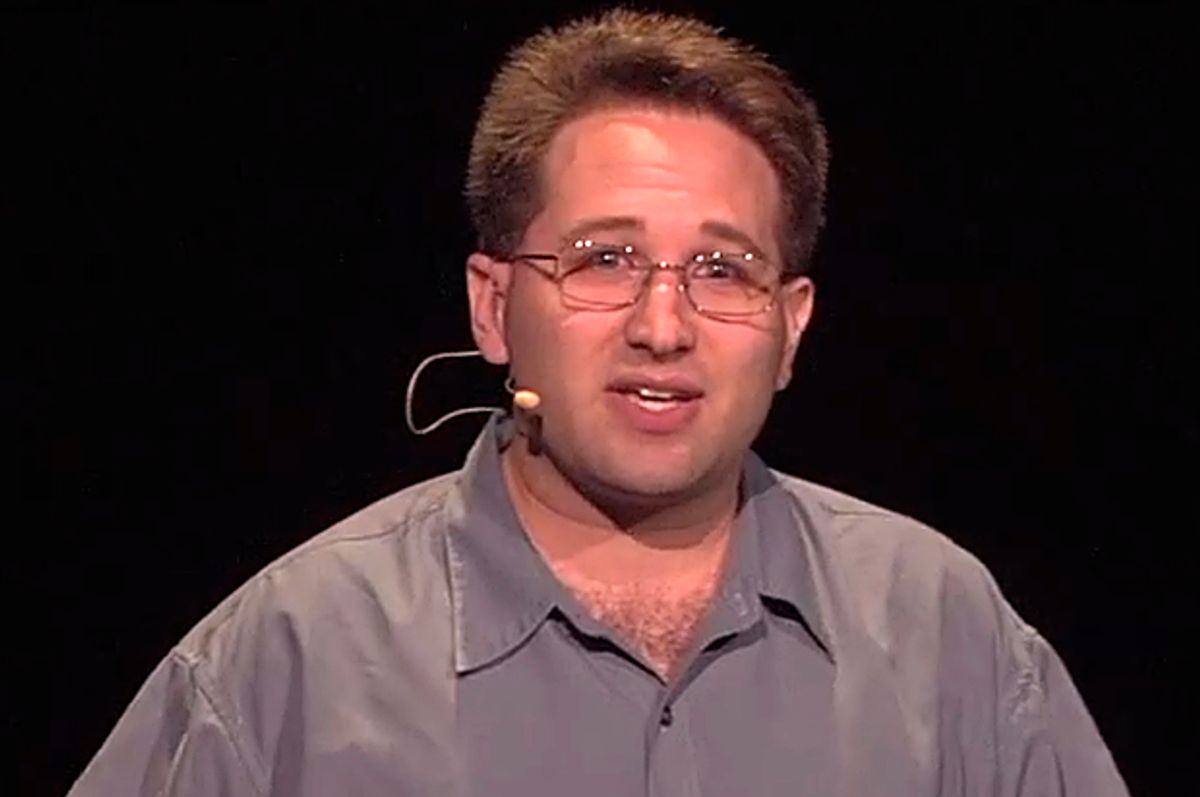 I feel your pain, bitter, lonely, nerdy guys. I really do.

It sounds corny to say it like that, but I don’t know how to say it and be believed. I know that because, having experienced this emotion from the inside for most of my life, I sure as hell resisted believing it when I heard people saying it.

There’s no one more resistant to being empathized with or more prone to call attempts to do so “patronizing” than the bitter lonely guy, especially when women try to do it but even when other nerdy guys try to reach out. People like Captain Awkward and Dr. Nerdlove and the founders of the Good Men Project spend huge chunks of their lives trying to help nerdy guys, but still get regularly blasted with extreme vitriol as “feminist SJWs” by said nerdy guys.

I’ve tried to write sympathetically about this stuff in the past: the guilt, the shame, the constant feelings of inadequacy. Indeed, part of the reason I am so determined to write and speak up and be an activist is a shamefaced admission of how lucky I’ve been to get away from where I was a few short years ago, how amazing a turning point 2014 was for me while being a terrible year for everyone else.

The viral meme that inaugurated 2015 as the New Year of the Bitter Male Nerd is MIT professor Scott Aaronson leaving an emotionally vulnerable comment on his blog during a heated argument about misogyny and sexual harassment in the STEM community.

He talks about how in the “battle of the sexes,” awkward shy guys damn sure don’t feel “privileged.” How he, in particular, was plagued with guilt and fear over approaching women, constantly self-castigating over the possibility that he was a sexual harasser or a rapist, to the point where he asked a therapist about the possibility of chemical castration. He talks of reading Andrea Dworkin and other radical feminists who make him feel, as a man, like a monster.

And it sucks. I’m not trying to deny that it sucks. Although I was never as bad off as Scott Aaronson I’ve felt a lot of those feelings and, more importantly, I’ve known my share of guys who were that bad off. It seems in every group of nerdy guys I’ve known there’s one guy who’s trapped in a feedback loop of anxiety and self-loathing when it comes to women that goes around and around in circles.

Feminists on the Internet have tried to respond to Aaronson’s piece, some sympathetically, some less so.

I don’t want to rehash all the points Amanda Marcotte and Laurie Penny made. Nor do I have some magic way of squaring the circle and making everything okay for guys like Scott -- for both him and me, high school was a long time ago, and the only thing that really heals these wounds isn’t any stirring speech or specific program of self-improvement but just time.

But I will say something that, as a guy who’s Been There, seems obvious to me and necessary to say.

None of the pain Scott talks about came from things that happened to him. They came from things that happened inside his head. He speaks in generalities about “sexual assault prevention workshops,” or of feeling targeted by feminist literature -- himself saying that he was perversely drawn to the most radical and aggressive rhetoric he could find, eschewing more moderate writers for the firebreathing of Dworkin and MacKinnon.

He doesn’t talk about anyone targeting or harassing him personally -- indeed, how could he be targeted by books written by second-wave feminists when he was a toddler? -- but of feeling targeted, of having an accusatory voice inside his mind tormenting him with a pervasive sense of inadequacy, uncleanness, wrongness. It doesn’t seem like anyone in his life was particularly giving him a hard time, but that he was giving himself a hard time and picking up on any critical or negative messages directed at men in general as a way to amplify his negative thoughts.

Depression, at its core, doesn’t really make sense, but it’s really great at hijacking the rest of your brain to make itself make sense, and when the depressed person in question is highly intelligent, you end up with an immaculately logical tower of reasoning for why their depression is wholly rational and inevitable.

That’s how I feel when I look at Scott’s impassioned argument that the dating scene is set up to grind “shy awkward nerds” into the dirt while letting jockish “Neanderthals” have all the women they want. I could point out plenty of evidence, statistical and anecdotal, that this is not in fact the case, as commenters in that thread in fact do -- but what would be the point? You can’t argue with emotions that deeply ingrained.

What’s striking to me is that this comes up because Scott very passionately wants to debate that nerds don’t have “male privilege” and that nerdy guys are the victims, not perpetrators, of sexism. He is arguing this to a commenter posting under the name “Amy,” who argues that shy, nerdy guys are in fact plenty dangerous on the grounds that she has been raped by a shy, nerdy boyfriend, and that in her life experience around shy, nerdy guys she’s seen plenty of shy, nerdy guys commit harassment and assault and use their shy nerdiness as a shield against culpability for it.

To be blunt, Scott’s story is about Scott himself spending a lot of time by himself hating himself. When he eventually stops hating himself and, as an older, more mature nerd, asks women out, no women mace him, slap him or ritually humiliate him -- instead he ends up with a girlfriend who ends up becoming a wife. So far, so typical.

Amy’s story is about being harassed and groped by men in the tech world and, eventually, being raped by a shy, nerdy guy she thought she trusted. So far, so also typical.

And Scott, and his commenters, are treating the two as worthy of equivalent degrees of scrutiny.

This isn’t a new or unique instance of this kind of blind spot going on. We all know about the Gamergate firestorm where a bunch of anonymous guys on the Internet felt harassed and insulted by an article making general criticisms about “gamer culture” as a whole and deciding to react by harassing specific, individual women, including calling a SWAT team to someone’s house, and treating it as though these two things are equivalent.

It’s similar to an earlier instance when “nerd persecution” was cried, when Rebecca Watson talked publicly about being made to feel uncomfortable in an elevator at a conference for atheist thinkers by a guy hitting on her at 4:00 a.m.

Watson didn’t name the guy, didn’t share the guy’s social media handle, didn’t show a photo of the guy. The guy remains anonymous to this day. She wasn’t even particularly mean to him -- her “Guys, don’t do that” is exactly the kind of blunt, well-intentioned advice guys like Scott say they want.

This turns out to be a pattern. For most of us, sex is a big part of our lives, and our relationship to gender therefore a weighted and fraught thing. We all have hang-ups and neuroses, and they’re much more likely to manifest in the way we see sexual attraction and relationships than in the way we do our taxes. No one actually said men have it easy.

Guys claim to be harassed more often online than women do, but when guys are “harassed” it means being exposed to a generalized atmosphere of nasty comments and rude behavior. By contrast, women are the ones who get singled out, stalked, who become unwilling celebrities with a horde of people dedicated to “taking her down."

This is what Laurie Penny means -- or one of the things she means -- when she says that the harm the “patriarchy” causes women is “structural.” Not that all women have it worse than all men. Not that anyone gets away without getting at least a little screwed up by the arbitrary, unreasonable demands our culture makes of us. But that it’s women who disproportionately bear the burden of actual harm, of being directly victimized by other people.

I don’t know what the best way is to help guys like Scott Aaronson who wrestle with internal demons. Internal demons are slippery things. I do know that what could help women like Amy is to find the guys who are doing bad things to her and stop those guys from doing that. That’s why feminism is more focused on women’s issues than men’s, because women’s issues are the things happening out in the world where we can do something about them.

Similarly, no one gets away without having hang-ups and neuroses about race, but racism -- the systematic denial of access to financial and social capital, the being kept out of jobs, the being harassed and shot by law enforcement -- is something that happens to black people in this country and not to whites.

The questions of how to deal with the roles we’ve been handed down by our parents and our culture and how we parse how much of it is our own personality problems and our own psychology versus our cultural inheritance -- that’s a problem all of us have and maybe will continue to have for the rest of human history.

But the problem of people being assaulted, harassed, raped, killed? That’s an external, physical problem. That’s something we can do something about.

I don’t know how “women,” as a group, can help men with the problems he describes. I can testify from my own experience that getting laid does not, in and of itself, magically make anything better and that if Scott believes (as he says) that living in an era when he would’ve had an arranged marriage at a young age would’ve made his problems vanish, he’s probably wrong.

But meanwhile, women are getting stalked and raped and killed. That’s something that men are doing and that men can stop other men from doing.

And, with apologies to my fellow emotionally tortured guys, that really ought to be our priority.