Judge could rule in dispute over MLK Bible and Nobel medal 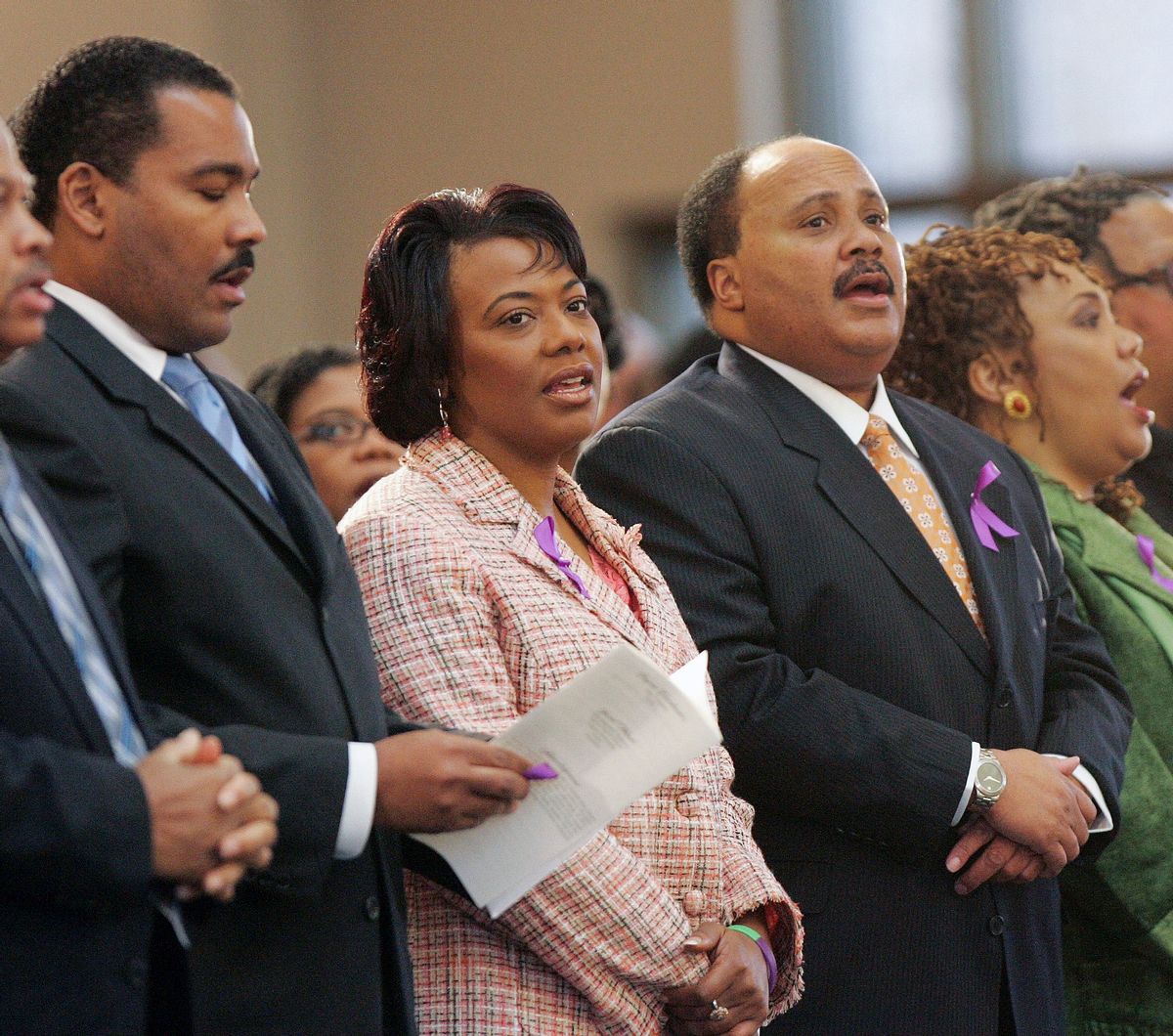 FILE - In this Feb. 6, 2006 file photo, the children of Martin Luther King Jr.,and Coretta Scott King, left to right, Dexter Scott King, Rev. Bernice King, Martin Luther King III and Yolanda King participate in a musical tribute to their mother at the new Ebenezer Baptist Church in Atlanta Monday, Feb. 6, 2006. A judge in Atlanta is set to hear motions Tuesday, Jan. 13, 2015, in the legal dispute that pits Martin Luther King Jr.s two sons against his daughter Bernice in a dispute over two of his most cherished items. (AP Photo/John Bazemore, File) (AP)
--

Both relics reside in a safe deposit box, the keys held since March by an Atlanta judge presiding over the latest — and in many eyes, the ugliest — fight between King's heirs.

The Estate of Martin Luther King Jr. Inc., which is controlled by Martin Luther King III and his younger brother, Dexter Scott King, asked a judge a year ago to order their sister Bernice to turn over their father's Nobel medal and traveling Bible. The brothers want to sell them to a private buyer.

Fulton County Superior Court Judge Robert McBurney could decide the case at a hearing Tuesday or let it go to trial. He said when he ordered Bernice to hand over the Bible and medal to the court's custody that it appeared likely the estate will win the case.

This is at least the fifth lawsuit between the siblings in the past decade, but this one crosses the line, Bernice argued in February from the pulpit of historic Ebenezer Baptist Church in Atlanta, where her father and grandfather preached. Her father cherished these two items, which speak to the very core of who he was, she said.

The Rev. Timothy McDonald, who served as assistant pastor at Ebenezer from 1978 to 1984 and sides with Bernice but describes himself as a friend of the whole family, told The Associated Press: "You don't sell Bibles and you don't get but one Nobel Peace Prize. There are some items that you just don't put a price on."

The estate's lawyers have not responded to requests for comment from the King brothers. At a hearing last year, a lawyer who represented the estate at the time said they want to sell the two items because the estate needs the money.

The estate is a private entity, so its finances aren't public, and court records don't elaborate on the estate's need for cash.

Whether to sell the Bible and the medal is not up to the judge, or even part of the lawsuit, which is purely an ownership dispute.

Lawyers for Bernice have argued, among other things, that King gave the Nobel medal to his wife as a gift, meaning that it is part of Coretta Scott King's estate. Bernice is the administrator of her mother's estate.

King's heirs have previously parted with parts of his legacy. They sold a collection of more than 10,000 of his personal papers and books in 2006 for $32 million, a collection now housed at Morehouse College, King's alma mater.

Two separate appraisers, Leila Dunbar and Clive Howe, told the AP they would expect the medal to sell for about $5 million to $10 million, and possibly more, based on what other Nobel medals have gone for and King's place in history.

If they are sold through a private sale, which can bring substantially higher sums from buyers who want to secure items before they get to auction, the medal alone could fetch $15 million to $20 million, Howe said.

Both items have enormous societal value and should be on public display, said Barbara Andrews, director of education and interpretation at the National Civil Rights Museum in Memphis, Tennessee. The Bible is important because of who King was, and the Nobel Peace Prize because of what it signified — that the fight for civil rights was being recognized on a world stage, she said.

While museums and books can talk about the medal, being able to see it renders it tangible, "more than a photograph, more than us just talking or writing about it," Andrews said.

Even in the hands of Bernice, though, neither item has regularly been available to the public.

A replica of the medal has been on display at the King Center for about 17 years, but it's unclear when the medal itself was last shown, King Center spokesman Steve Klein said.

Martin Luther King Jr. was assassinated in Memphis in 1968. Among his children, Martin III got his father's name, while Dexter got his looks. Bernice followed her father into the ministry and shares his gift for public speaking. And the firstborn, Yolanda, was known as a peacekeeper.

Even before she died in 2007, though, the siblings had taken their quarrels public and gone through periods where they didn't speak to each other.

In December 2005, Bernice and Martin successfully fought a push by Yolanda and Dexter, who along with other trustees of the Martin Luther King Jr. Center for Nonviolent Social Change wanted to sell it to the National Park Service. In 2008, two years after the death of their mother and a year after Yolanda died, a long-simmering dispute between the surviving siblings boiled over, with three lawsuits filed between them in as many months.

In August 2013 — on the 50th anniversary of King's "I Have a Dream" speech — the estate asked a judge to stop the King Center, where Bernice is the CEO, from using his image, likeness and memorabilia, arguing that the center wasn't caring for King artifacts properly.

That case is pending.