The News Corp. chief gets racist on Twitter, while Bill Cosby makes a rape joke 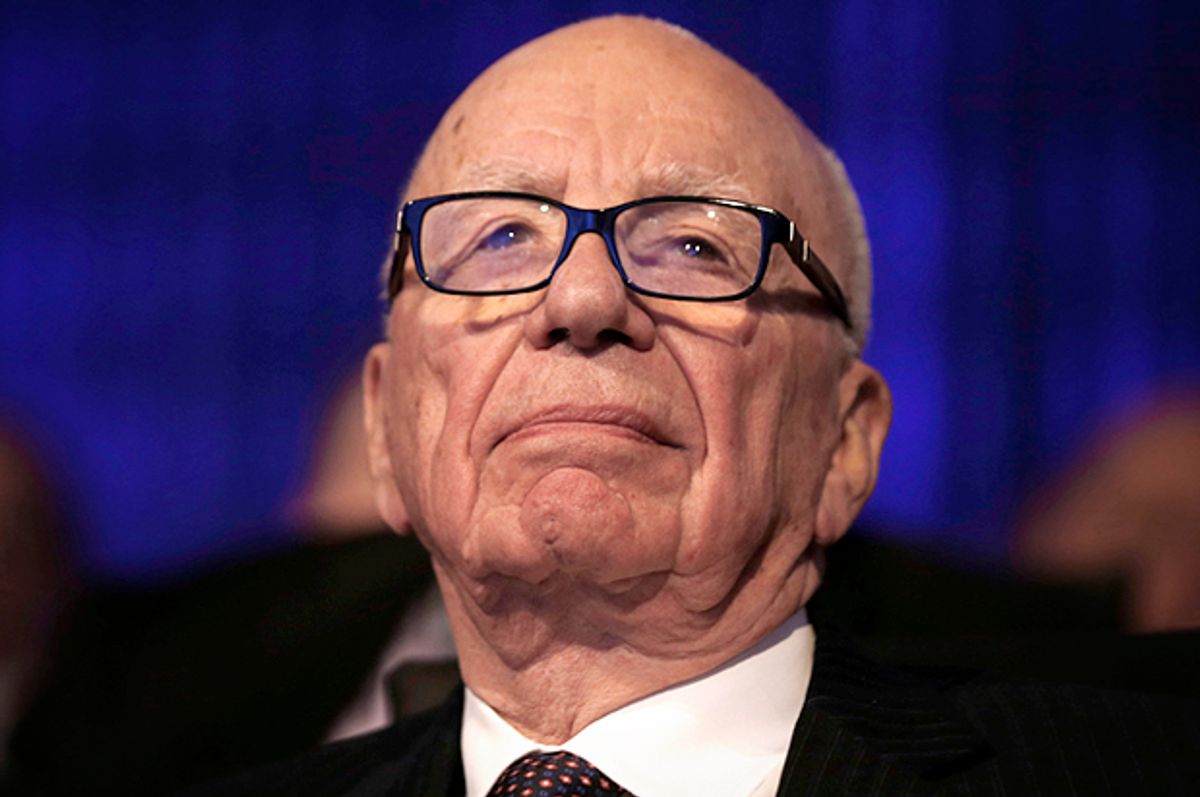 Fox, O’Reilly, CNN and right-wingers of all kinds have been harping away at the Muslim community all week about the need for moderate Muslims the world over to condemn the Charlie Hebdo attack and subsequent violence in Paris. Many Muslims and their leaders have done just that, although Fox can’t seem to locate these numerous condemnations. Bill Maher grudgingly seemed to make some distinction between more moderate and extremist Muslims on Friday night, though he still refers to the “Muslim world” as a single block of identically-minded, violent people. But Rupert Murdoch does them all one better. Blame moderate Muslims, even if they condemn extremist jihadis.

On Friday evening, the News Corp CEO took to Twitter to express his feelings that all Muslim people, even the peaceful ones, “should be held responsible” for “their growing jihadist cancer.”

It seems there is only one solution: Don’t be Muslim. Just stop being Muslim. But that is probably not enough. Stop being from the Muslim part of the world. You can’t expect us to be able to tell who is Muslim and who is not.

Everyone can stop trying to solve the problem of campus rape. Phyllis Schlafly has a brilliant idea: schools should stop admitting so many women.

Back in the good old days, when the crusading anti-feminist went to college, odds were much better for a gal on the hunt for a date. “Campuses were about 70 percent male, and until 1970 it was still nearly 60 percent,” Schlafly wrote in her Mondaycolumn for the World Net Daily. “Today, however, the male percentage has fallen to the low 40s on most campuses.”

This tragedy, Schlafly suggests, is causing those outnumbered men to rape women. There are just so darn many of them, why the heck not rape a few? Boys know there are more women than men because they are better at math than girls are. “Boys are more likely than girls to look at the cost-benefit tradeoff of going to college,” Schlafly wrote. “The imbalance of far more women than men at colleges has been a factor in the various sex scandals that have made news in the last couple of years.”

Solution-minded Schlafly suggests imposing, “the duty on admissions officers to arbitrarily admit only half women and half men.”

Another way to make sure fewer women (and poor people) go to college: “Stop granting college loans,” she suggested, “thereby forcing students to take jobs to pay for their tuition and eliminate time for parties.”

Actually, why not just go all the way with this line of thinking, Phyllis? Abort those troublesome female fetuses from teh get-go. Kind of surprised she didn’t come up with that.

3. Mitch McConnell invents a time machine, takes credit for things he had nothing to do with.

You can be as cynical as the day is long, but you can never out-pace or predict the sheer outlandishness of congressional Republicans. And so it was, that in one of his first acts of the new year, newly-minted Senate Majority leader Mitch McConnell took credit, retroactively, for the economic recovery seen in the positive job numbers in December. His pretzel logic? It was all the excitement about the incoming Republican-controlled Congress.

“After so many years of sluggish growth, we’re finally seeing some economic data that can provide a glimmer of hope,” McConnell said during a floor speech on Wednesday. “The uptick appears to coincide with the biggest political change of the Obama administration’s long tenure in Washington: the expectation of a new Republican Congress.”

Paul Krugman couldn’t believe it. He’d been wondering how the Republicans would spin the inconvenient truth of the economic recovery under that socialist, anti-business President Obama. He never dreamed Mitch McConnell would take credit for it.

Jon Stewart, too, was flabbergasted. But he did, eventually, figure it out. “The truth is this, and it’ll blow your minds," he said, reaching into his arsenal of Mitch McConnell turtle jokes. "If you rub Mitch McConnell’s shell, you will receive five years of business growth.”

4. Rudolph Giuliani: If you oppose mosque surveillance, you’re obviously up to no good.

Favorite Fox guest, right-wing blowhard Rudy Giuliani, has long loved the police state, and seldom misses an opportunity to call for ramped up policing. He displayed this penchant in the wake of recent police shootings of unarmed black men—which he says are the fault of the black community—and went at it again in the aftermath of the terrorist attacks in Paris this week.

His reasoning is not so much pretzel logic as a complete Catch-22. Anyone who opposes surveillance and profiling of the Muslim community is clearly up to no good. In other words, innocent people don’t insist on their civil rights.

Elisabeth Hasselbeck fawningly gave him the opening: “Mr. Mayor, should we be surveiling mosques?” she asked.

Giuliani began by taking a swipe at Mayor Bill de Blasio for taking steps to end the NYPD’s mosque surveillance, calling it “one of the more irrational acts.”

Giuliani just doesn’t understand why people, especially blacks and Muslims, aren’t delighted to have as many cops around as possible. Only criminals don’t want those nice officers around. To those in the Muslim community, he said:

“If you're uncomfortable with police officers at your service, you must be saying things that are dangerous.”

Case, along with his mind, closed.

Already named Misinformer of the Year by Media Matters, George Will started the new year by completely misconstruing climate science and proceeding to misinform his readers some more.

In a column this week ostensibly reviewing two books on climate change, Will displayed some of that brilliant pretzel logic for which he is so revered. The books, written by actual scientists, show how, historically, even modest climate change in one region has wrought far-reaching devastation. Will’s bizarre takeaway from this is that the fact the climate has changed in the past for reasons other than humans and their carbon pollution proves that humans don’t cause climate change.

Pretzel logic is perhaps too generous a term for this. It’s a bit like arguing that because people have been injured in the past by things other than automobiles, being hit by a car is really not that bad for you.

It’s time to loosen Will’s bowtie. Not enough oxygen seems to be reaching his brain.

Despite about 20 women coming forward with allegations of rape and sexual assault against him, Bill Cosby is still out there, doing comedy shows and yucking it up. About rape! At a show in London this week, a woman in Cosby’s audience was walking toward the bar. Cosby asked where she was going, and she replied she was getting a drink. “You have to be careful drinking around me,” Cosby coyly cracked, a reference to his alleged penchant for drugging women in order to more easily rape them. The audience erupted in laughter.

There are no words.