Being a "human woman" in Hollywood: How Tina Fey & Charlize Theron are fighting back 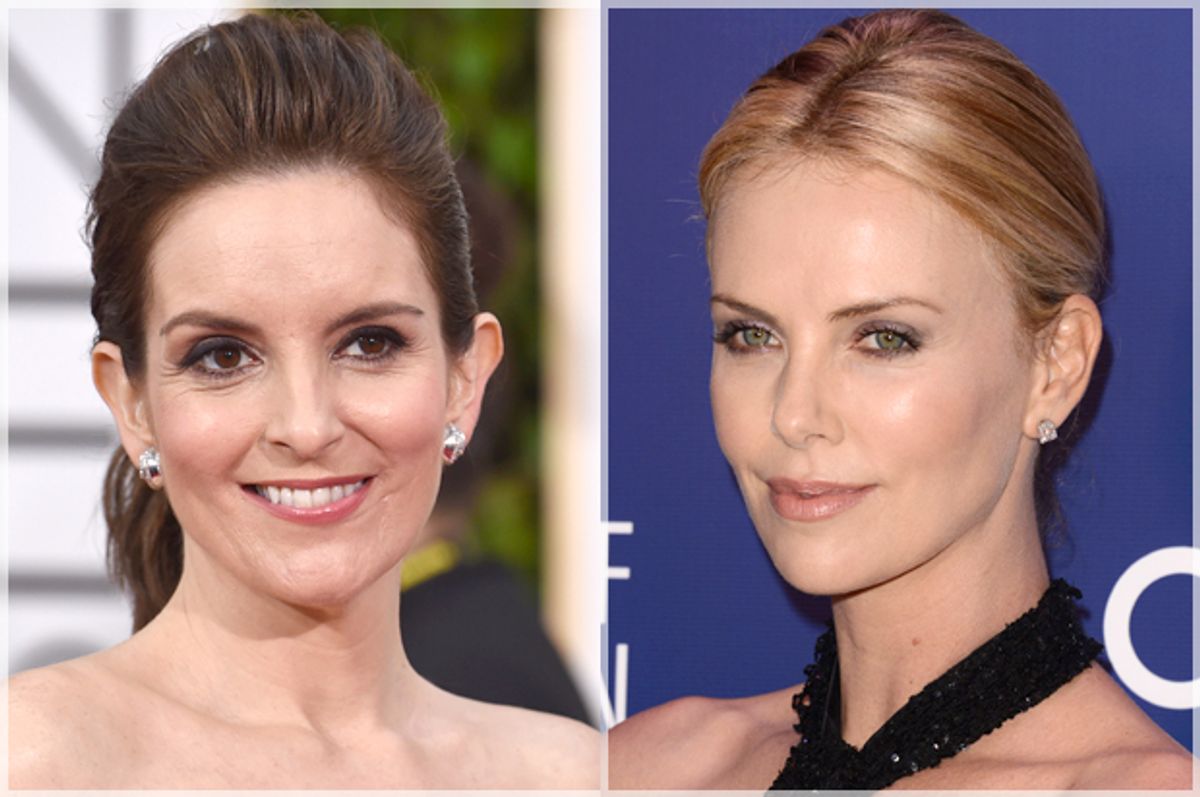 Two of my favorite jokes from last night’s Golden Globe awards were among the subtler barbs dished out: During the opening monologue, Tina Fey noted that Steve Carrell had to sit through two hours of hair and makeup, including facial prosthesis, to transform into his “Foxcatcher” character. “Just for comparison,” Fey continued, “it took me three hours today to prepare for my role as human woman.” And in a nod to Patricia Arquette’s nomination, Amy Poehler wryly observed, “‘Boyhood’ proves that there are still great roles for women over 40 -- as long as you get hired when you’re under 40.”

To sum up: Things are different for women in Hollywood.

It’s a lesson we learned, once again, after salary documents leaked during the Sony hack revealed that the company was paying several women less than their male colleagues. The differences in back-end compensation between Jennifer Lawrence, the star of a billion-dollar movie franchise, and her male co-stars got a lot of coverage, but the disparities didn’t end there. The leak also revealed that the co-presidents of Sony’s Columbia Pictures division, Michael De Luca and Hannah Minghella, had a $1 million pay gap between them despite having the exact same job. I’ll let you guess which of the two was making more.

But according to a report from Page Six, Charlize Theron was able to use the leak to negotiate a $10 million package for her upcoming role in “The Huntsman.” While the hack itself was deplorable, making Sony’s pay gap public apparently helped to give her the leverage she needed to get the salary bump:

One source said, “Charlize insisted that she get paid the same money as Chris. She has a great track record, so she got the same deal.” Another insider added: “One knock-on effect from the Sony hacking scandal is that there will be more sensitivity about equal pay for actresses and hiring practices at movie studios.”

Pay secrecy hurts women’s ability to negotiate fair pay. Because it’s hard for women to know if we’re being undercompensated -- which, statistically, we probably are -- if we have no idea what our colleagues are pulling in for the same work. It shouldn’t take an email hack to bring such disparities to light.

But while President Obama acted last year to end pay secrecy among federal contractors, Republicans have repeatedly blocked the Paycheck Fairness Act, a measure that would prevent bosses from retaliating against employees who share salary information and impose tougher penalties on employers who discriminate based on gender.

In a weird Lucy-and-the-football move, Republicans finally let the measure advance for debate last year -- only to block it, again. The GOP’s September move to kill the measure was the fourth time they’ve acted against it. Here’s an excerpt from a memo explaining why Republicans opposed the Paycheck Fairness Act:

First, it is already illegal to discriminate on the basis of gender. It’s been against the law to pay a woman less than a man with comparable experience in the same job since the Equal Pay Act of 1963.

The “fix” that Democrats propose, then, won’t change that. It would, however, tightly regulate how employers can pay their employees. This law will not create "equal" pay, but it will make it nearly impossible for employers to tie compensation to work quality, productivity and experience, reduce flexibility in the workplace, and make it far easier to file frivolous lawsuits that line the pockets of trial lawyers.

The Sony hack is just another reminder that current law falls short when it comes to addressing the pay gap. What would the GOP staffers behind the memo say to Jennifer Lawrence, whose “work quality” -- judging from the boatload of nominations and awards she’s received -- is not in dispute but was nonetheless compensated at a lesser rate than her male colleagues. Or Minghella, who shares a title with a man, just not a paycheck.

Last night, Tina Fey and Amy Poehler used humor to shine a light on the ways women in their industry are forced to play by a different set of rules. Charlize Theron took on those rules and won. But it shouldn’t take a sweeping hack to give working women recourse to change. Democrats should keep that in mind this year.