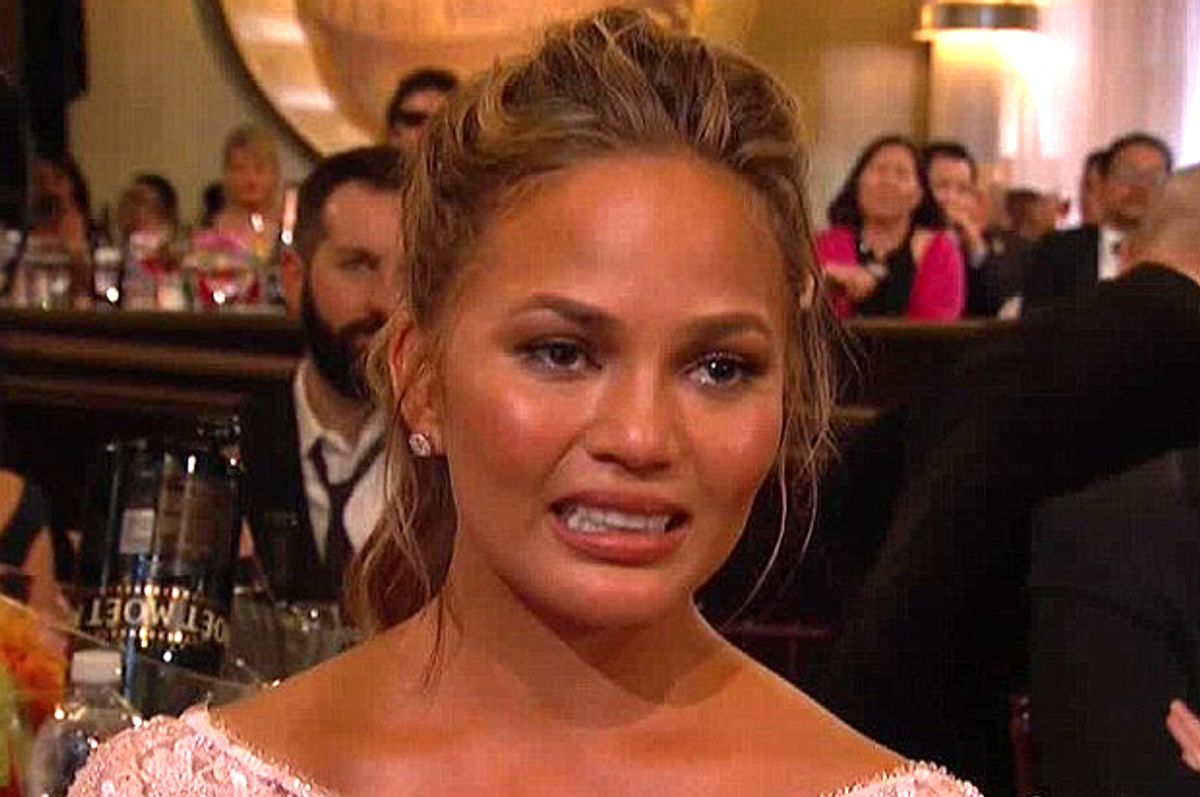 This is how a supermodel wife of a Golden Globe-nominated musician upstages her husband during the awards—not by nailing her red carpet look (though she did), but by forgetting that the camera might light on her during his emotional acceptance speech. The camera cut to Teigen as her husband John Legend began to thank Common for inviting him to work on their award-winning song “Glory,” but after Common’s stirring tribute to the civil rights movement and “Selma” director Ava DuVernay, Teigen didn’t have enough time to pull it together to look appropriately proud yet aloof, as the occasion demands. (I teared up a little during Common’s speech, and I’m not even married to the guy standing next to him.) The result? An epic on-camera cry-face, which is to say: instant meme.

To the credit of her sense of humor, Teigen immediately realized what it meant (“It’s been 5 minutes and I’m a meme”):

Later, she re-tweeted this genius edit:

There is something delightful about encountering a spontaneous cry-face in the wild like this. Teigen’s tearful reaction stood out for the same reason that spotting Allison Janney lose her cool when Prince strolled on stage to present the award was such a thrill. Any time a professional public figure cuts through their layers of coaching and composure to let slip an unbridled display of humanity, we’re hooked. The simple image of a cry-face is a compact visual shorthand, almost like a living emoji. The more distorted and grotesque the face in the freeze-frame, the better.

Even professional cry-faces feed into our obsession. The self-aware James Van Der Beek has lampooned his own “Dawson crying” meme—arguably the most enduring of the genre—and the many on-screen cry faces of Claire Danes’ “Homeland” heroine, the hyper-emotional Carrie Mathison, have inspired their own Tumblr and New Yorker essay.

Teigen’s Golden Globes cry-face is infinitely versatile, which never hurts a meme’s utility. Its vicarious embarrassment quotient is strong and relatable, but not overpowering.  Without context, her face looks like it’s caught in an involuntary cringe, a response to a trivial disappointment that hits disproportionately hard, like when a TV weather report interrupts a cliffhanger season finale or Chipotle runs out of guacamole during lunch. There is an "abandon all hope" deadpan quality to her eyes that pairs elegantly with her bared teeth. Deadline moved up an hour? Not quite Dawson gif-worthy, but a Chrissy Teigen cry-face might be an appropriate response.

And as popular as Van Der Beek's cry-face was, these days we are particularly obsessed with catching women in the act. There's a weird strain of schadenfreude in the public fascination with the female cryface: as though we're eager to see a woman who is usually perfectly composed (say, a high-profile swimsuit model like Teigen) lose control in a messy and public way. It's a hyper depiction of extreme and traditionally-feminine vulnerability that can be used to cut her down to size. Dawson's epic cry can be viewed as an act of emasculation, too—a different side of the same coin.

Are we laughing at a cry-face or crying along with it? Depends on the context. In their acting-school parody "The Method Gun," Austin-based theater company The Rude Mechs pulls an amazing emotional trick. In the first act of the play, the ensemble faces the audience to demonstrate an acting exercise: they all begin to cry. It’s a silly moment, a line of actors fake-crying in unison, and it gets big, if uncomfortable, laughs. The cast reprises the exercise at the end of the show, but while they execute the scene in the exact same fashion, it has the opposite effect on the audience, transformed into an affecting display of naked emotion because of the context that preceded it. Both crying scenes elicited a genuine emotional response—the quiet reverence in the final scene isn't necessarily better than the earlier laughs. But the audience is left with the uncomfortable understanding that we place limits on our empathy that we impose without thinking, and that those limits can be manipulated. In the professional cry-face meme world, Dawson cries for himself, not for me. His sobbing is the first exercise, and Carrie Mathison's the second.

When we face the exercise outside of a scripted scene, like Teigen's Golden Globes moment, it becomes even more compelling. Anyone who’s ever cried in public knows how humiliating the loss of control can be. The blotchy skin, the wailing, the heaving inability to say if you’re okay or not when a well-meaning stranger asks. Seeing a professionally-beautiful celebrity break down in a way that the average person can sympathize with is exquisitely cathartic. When we feel the outburst might be disingenuous (see: some of Kim Kardashian’s less sincere on-camera sads) our schadenfreude is no less powerful.

But the weirdness of Chrissy Teigen's Golden Globes cry-face is the only authenticity stamp it needs. For one unexpected moment, Teigen wasn't a swimsuit model and one-half of a glamorous entertainment couple. In her face we saw the distance between what we might intend to present to the world and what the world actually sees, a truth we couldn't help but love her for showing us.