Hebdo shooting's missing context: How long-held vilification of Muslims got lost in the discussion 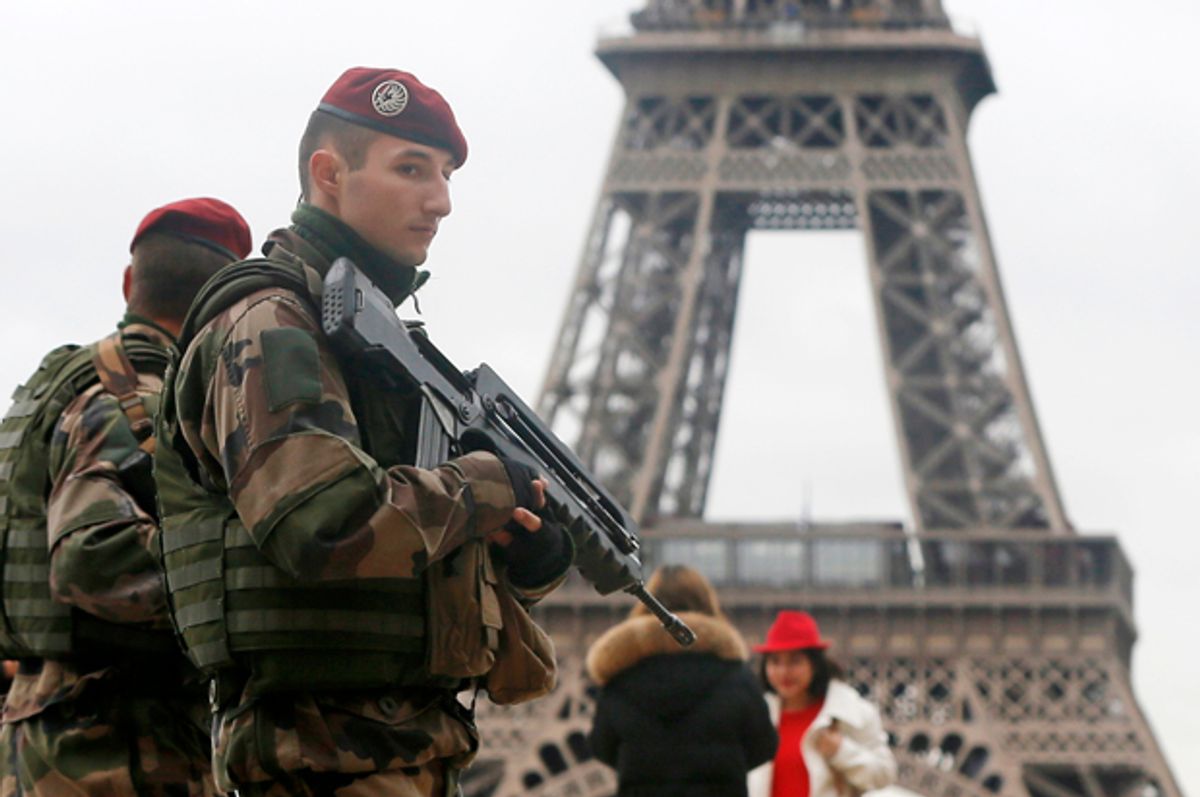 Americans should have learned several things from their experiences in the aftermath of September 11, 2001: first, the purpose of a public claim of “terrorism” is often to mobilize and centralize all firepower and legal authority behind the executive branch. This enables such leaders to shore up an otherwise faltering leadership and thereby their capacity for retribution in the name of justice. Second, “terrorism” is often asserted to insinuate a causal link between an act of violence committed by someone perceived to be Muslim and the presumed “dangerous values” of Islam. That link is not factual, just evocative. It serves as a rhetorical device that casts aspersions onto all Muslims — deeming them all to be religious zealots, regardless of their views or place on the political spectrum.

It is especially effective to use the term “terrorism” in non-Muslim societies to describe violence that is suspected of being enacted by Muslim individuals -- regardless of whether they are part of a larger organized agenda. Even if the Kouachi brothers had just been punks acting without permission or authority from others whom they claim to serve, it's not hard to imagine the term “terrorism” being deployed and spread exponentially by an obedient press uncritical of the state’s agenda -- and eager to parrot the socially-sanctioned racism of elected leaders in the name of patriotism. Remember the Boston bombings, where the Tsarnaev brothers were accused of terrorism, but despite extensive attempts, could not be tied to a larger terrorist organization.

The narrative offered by French President François Hollande in the immediate aftermath of the Charlie Hebdo shootings Wednesday morning was that these were “acts of terror against free speech." The ensuing outcries and oaths of “Je suis Charlie,” seem to reiterate the same exclamation — that the shootings were retaliatory acts of intolerance against a French journalistic institution that equally and even-handedly satirized Catholics, Jews, as well as Muslims.

We also heard the hasty admonitions by Hollande not to lump Muslims with the fundamentalists behind these attacks. But he knows well that “terrorism” is a loaded term that insinuates that the wider Muslim community supports, or is at least sympathetic to, such acts of violence. There appears to be little interest, either on Hollande’s behalf or from various media sites, about whether such insinuations are true. Indeed, why would Hollande mind? Prior to the attacks, Hollande had the support of 13% of the French people, while Marine Le Pen, unabashed Islamophobe and reactionary extraordinaire, was carrying nearly 30% of support.  See paragraph 1.

There is even less concern about how the promiscuous deployment of the term “terrorism” will harm all Muslims, even when Muslim populations condemn such violence -- and even after they have already been subject to insults through satire. My words are not an endorsement of censorship; I am merely pointing out that Muslims have already been subject to Charlie Hebdo’s satire and journalistic decisions. And again, because of the murderous actions of three men with assault weapons, the larger Muslim population is again the recipient of insults, backlash, and racist violent actions. Except, this time, Muslims are being attacked by police authorities and civilians alike in the name of French “Republicanism” and a “free and open society.”  It is reported that 3.7 million people marched in France last weekend, in a show of “national unity to honor the 17 victims of three days of terror.” The rally was led by French and other notable patrons and purveyors of liberalism, tolerance, and democracy: David Cameron, Benjamin Netanyahu, Jordan’s King Abdullah II, among others. It was an awe-inspiring scene, seeming to reflect a resolute resistance to seventeen murders in a gruesome massacre that has captivated the world.

The French Prime Minister, Manuel Valls took time away from his effort to impose economic austerity upon French society to assert a brave, commonly echoed sentiment, among the French: "We are all Charlie, we are all police, we are all Jews of France.” But this splendid statement of resistance was hardly as heroic as it was intended to seem.

As some have pointed out, Charlie Hebdo’s acts of “satire” were disproportionately directed toward the approximately four million Muslims who have attempted to make France their home. Others have charged that the satirical ire the magazine repeatedly directed toward Muslims could be more accurately characterized as racist rather than merely satirical. But at some level, that doesn’t really seem to be at the heart of the anger expressed against the violent acts committed by the Saïd and Cherif Kouachi or Ahmed Coulibaly.

Rather, the anger seems to be directed against the supposed inability of Muslims to laugh at themselves, i.e., their supposedly unique inability to tolerate the satire or invective or belittling of the precepts that good French Republican citizens imagine are representative of Islam. And this is where the foundations of the politically inexpensive show of defiance on display in the march can be found: it is in a collective outrage that Muslim migrants to France, along with the Algerian migrants and inheritors of a French colonial legacy, refuse to know their place.

I am not talking in this instance about the horrific, murderous acts of the Kouachi brothers or Ahmed Coulibaly. Their actions are neither condoned nor accepted by French Muslims or millions of Muslims around the world. But that point is, really, irrelevant to this point; in the name of free speech, the rally of outrage around the world is really aimed at the perceived defiance of Muslims, in their refusal to abide by French republican secular norms. Many non-Muslims around the globe seem to believe that Muslims themselves are to blame for their own vilification. But it is a classic blame-the-victim outrage shrouded in the discourse of French secular republicanism, obscured in the mantle of anti-terrorism discourse.

The unspoken assumptions behind the global outrage over last week’s events seem to be: How dare Muslims believe that they can continue to live as a conspicuous religious minority in a secular French republic? How dare they refuse to assimilate? At one level, the refusal to assimilate appears to be signaled by the seeming refusal of Muslim women to remove their hijabs and niqabs, or of Muslim men to shave their beards, or in refusing to “become” French.  But at another level — the French, through their own inconsistencies are well aware that the eradication of these outward signs of religiosity are not really the purpose of recent legislation to that effect. The most egregious violation of decorum conducted by the Muslim population (not just in France, but elsewhere in the Western world) is that they refuse to stop being Muslim (and I mean that in all of its impossibility).

That refusal to “stop being Muslim” is synechdochically linked to the globally institutionalized War on Terror, as initiated in its latest incarnation by the U.S. in the aftermath of September 11, 2001, but as joined and taken up by other nations eager to conflate their own Islamophobia with a righteous battle against Muslim religious extremists.

In light of France’s long and troubled racist history, when the account of the Charlie Hebdo massacre is uncritically and squarely located in the narrative of terrorism, we still haven’t gotten the full context. As Americans know all too well, despite pretenses to the contrary, terrorism is a vaguely defined legal and political concept, that is most often used to denounce countries with whom it has had a long and troubled concept.

It should be self-evident that “free speech” qua invective camouflaged as satire hardly renders damage to secure populations on the scale that it does to vulnerable minorities. Did Charlie Hebdo satirize Christianity? Of course. But those satirical images raised neither eyebrows nor alarms -- not because devout Christians aren’t offended or have “thicker skins,” or are “more rational” than Muslims, but because Christians are neither religious nor ethnic minorities. Christians are not politically vulnerable in the Republic of France; they are the opposite — secure and fully capable. With the support of a powerful Church they are able to muster huge marches against same-sex marriage and other perceived religious offenses. Nor are Christians the subject of a long-standing debate about whether their presence is an economic imposition, undermining society, or a political burden on French society. They are part of the establishment and power elite. As such, their security is guaranteed, since Christian values have long been secularized as a part of French -- and lest we forget, American -- society.

Contrast the secure status of Christians to that of the long-standing debate about the “Muslim problem.” Muslims, who in 2010 made up approximately 5.7 % of the population of France, have long been subject to political harassment, institutional racism, and cultural contempt. Consider the French legislation that, in the name of laïcité, or public secularism, outlaws “conspicuous” religious garb in public institutions or for those delivering public services, but primarily enforces the prohibition on the hijab and more recently, the niqab, and initially forgot-about Sikh turbans. Consider the high rates of economic discrimination against Muslims in France. As Laila Lalami points out:

[…A]cademic studies have repeatedly shown that French Muslims are twice as likely to be unemployed than non-Muslims. They graduate from high school at lower rates and are imprisoned at higher rates. Many of them live in densely populated housing projects, with little access to the kinds of opportunities other French citizens receive.

Somehow, the French state is overwhelmingly concerned with prohibiting the hijab in the public sector in the name of strengthening the unity of the secular French state, but unemployment seems to be too trivial a problem to manage in the name of French republican freedom.

What if the Charlie Hebdo massacre had been committed by Catholic or Jewish extremists? Would there have been the same references to “terror”? Would the same political leaders have turned up in a show of unity against “acts of terror against free speech”? Would 3.7 million people have turned up to insist that “Je suis Charlie”?

I doubt it. We would do well to consider the Paris massacres and the ensuing cries of outrage not only in the context of terrorism, but in context of the long-held vilification of Muslims. Like many other religious and ethnic populations, Muslims are as complex as they are diverse, and they too have been at the receiving end of political and cultural persecution for a very long time. The cultural and political responses to the Charlie Hebdo massacres should take those circumstances into account.