Margaret Cho's squeamish Globes cameo: Why her North Korean bit was so weird to watch

The Golden Globes are usually Hollywood's chance to pat themselves on the back. Then Margaret Cho goose-stepped in 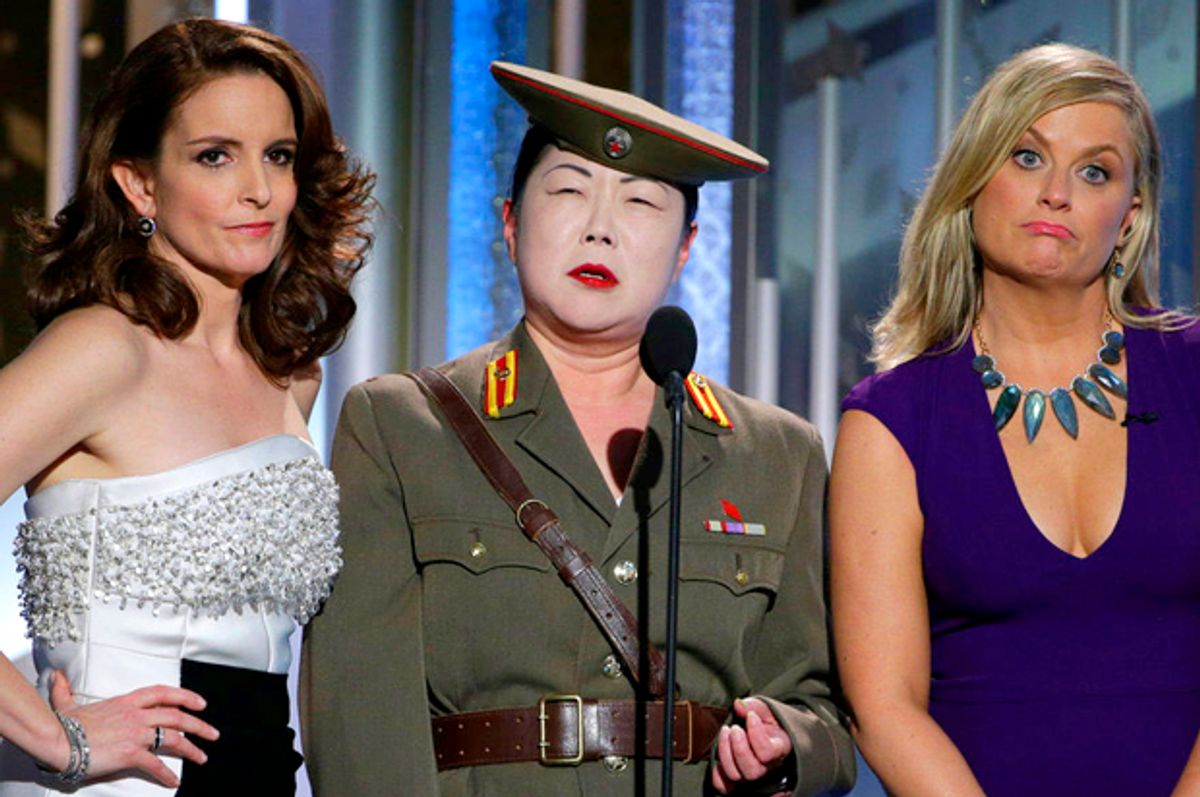 The only person of Asian descent on stage all night at the 72nd annual Golden Globe awards was Margaret Cho. The broadcast lasted over three hours; 96 separate individuals were nominated. Forty-nine different presenters labored over poorly written skit material before each envelope was opened. The full casts of numerous shows or films that won awards ended up onstage. Out of all of those people, Cho was the only ethnically Asian person up there. And lest we forget, Asia is home to the most populous country in the world (China), the second most populous (India), and the subject matter of many of the nominated films and tv shows (the war on terror). Even in the category of foreign language film, the most Asian that any nominee got was Russia—and the Russian film, “Leviathan,” which ended up winning in its category, is set in the European part of Russia.

So it was somewhat frustrating that Cho—an actress, stand-up comedian, and musician—wasn’t onstage for being nominated for a role. No, Cho was playing one—a reprisal, of sorts, of her Emmy-nominated role on Tina Fey’s “30 Rock.” On that show, she starred in a recurring role as both Kim Jong-Il and Kim Jong-Un (when one died, she barely changed her performance to play the other). Last night, she played a stoic North Korean film journalist Cho Yun Ja, of Movies Wow! Magazine, who was perhaps intended to look like Kim Jong-Un in a very bad disguise. The hope was to make some jokes about the Sony hacks related to “The Interview,” which may or may not have been carried out by North Korea. The result was a lot more confusing.

Cho’s character (also named Cho, I guess) first showed up in the audience, when Fey and her co-host Amy Poehler introduced her as the newest member of the Hollywood Foreign Press. Cho responded by immediately asking Meryl Streep to pose with her in a photo while holding a copy of Movies Wow! (which, let’s be honest, sounds like a great magazine). Streep started out a little flustered, before rising to the challenge with characteristic movie-star grace; Michael Keaton ran out to take the necessary photo. Cho said almost nothing audible—if she did say anything, the microphones didn’t pick it up, and some of the humor of the situation came out of her vigorous miming. In 2012, Cho told Zap2It that playing Kim had a comic element to him that was “almost like Charlie Chaplin in ‘The Great Dictator,’” and that silent-film performance in the audience made that bit work.

No, it was really when she started talking that things began to feel weird. Fey and Poehler, past the opening monologue, were little more than marginal hosts, save for a second-act bit where Cho came out again, this time on the stage proper. Fey and Poehler engaged Cho in some discussion about the show. It wasn’t the content that was necessarily so bothersome—No, she was not enjoying the show; it did not have enough babies or the presence of Dennis Rodman, which you can count on in Pyongyang—so much as it was the highly accented English that came out of her mouth, in what sounded like a painful reminder of old stereotypes. Then as the group disbanded, Cho walked offstage in an unmistakable fascist goose-step. (Seriously, kudos to her for her form.)

It was a challenging, uncomfortable minute of performance—not easily condemned as “offensive” or immediately praised as being “subversive.” The minute-long bit where Margaret Cho was actually onstage was closer to uncomfortable than it was to hilarious, on a night where the well-received cohosts Tina and Amy otherwise generally killed it. The comedians made a pretty damn good Cosby joke and roasted their friends and coworkers while looking very classy, indeed. So why did their North Korea segment feel so weirdly unfunny?

Some of it is due to the fact that trotting out a fully costumed character on a live awards show is just jarring. On “30 Rock,” the presence of real-life fascist dictator was kind of par for the course—the show had a witty, inside-jokey sense of humor that often played with political themes, and a farcical quality that allowed for bizarre, long-running gags. Cho’s Kim Jong-Il kidnapping Jack Donaghy’s fiancée Avery made just as much sense as Tracy’s wife Angie becoming the national spokesperson for ham, or Jenna starring in a film called “The Rural Juror,” based on the book by Kevin Grisham (John Grisham’s nonexistent brother).

On a live broadcast of a nonfiction event, a character in full costume means something quite different. Everyone else had self-tanner, shiny hair, and expensive clothes; it looked like Cho powdered her face to be lighter, and she wore a military-grade, largely unflattering suit (complete with uniform hat). Actors will adopt silly or convenient poses; hosts will pull voices, or faces, when they’re telling jokes. But the conceit of the thing is sort of that everyone’s “authentic” for a night. The Golden Globes, and any other awards show in this circuit, is just a gussied up industry party. As George Clooney observed, 80 percent of the room goes home a loser. An unknown percentage of the room goes home drunk. (I mean, wouldn’t you, at an industry event where you have to run into everyone you know?)

Meanwhile, this industry in particular happens to be very, very white—of the 96 nominees, only 14 are people of color, most from just two films (“Birdman” and “Selma”). Four were nominated for the same award (the writers of “Birdman”). And two aren’t even in the film industry—singer John Legend and rapper Common. Of the 49 presenters, only seven were people of color—including two more musicians (Jennifer Lopez and Prince) and one television mogul (Oprah Winfrey).

It makes for an unexpectedly charged situation. When Cho came out to make everyone laugh, she became the first Asian person on that stage all night—but she did so by playing a caricature. She has North Korean ancestry, and it was her choice to play that role; but what we saw, as audience members, was an incredibly familiar stereotype as the only representation of Asian culture. It’s a performance that required holding a lot of different truths in your head at the same time.

There was just one other moment in the evening that asked for similar investment—the brief acknowledgement during the ceremony of the murder of 12 staffers of the satirical French magazine Charlie Hebdo. The event has become a rallying point for some, who are using it as a platform for championing free speech and the right of artists to satirize anything they want. Naturally, of course, no one is disagreeing. Which is precisely why this room full of entertainers—of charlatans and storytellers and illusionists—went out of their way to make sure they came out in favor of it; an opinion no one disagrees with is the best kind of opinion there is.

But said less frequently—and certainly not said in the International ballroom of the Beverly Hilton—is the more complicated statement, “I am not Charlie”; condemning the murders seems to now go hand in hand with valorizing what that magazine produced. It’s par for the course for any organization, especially one in Hollywood, to pat themselves on the back for doing good for another year. (After all, who wouldn’t be moved by that stirring montage of George Clooney moments, including his humanitarian efforts?) But the point is, it’s still not that good—even if two women are hosting it and naming their desire on stage, even if “complicated” women, as Maggie Gyllenhaal said in her acceptance speech, are being celebrated onscreen in more numbers than ever. As uncomfortable as Margaret Cho’s performance made me (and, judging by the response, much of the audience), at least it did not settle for easy platitudes, either. I cannot fault her for mocking her own culture in her own way, just as I cannot fault her for the utter lack of Asian-Americans in every other part of the show. Somehow, the Hollywood Foreign Press Association skipped a continent this year, but they feel self-assured enough to have a standing ovation celebrating, I don’t know, themselves, during their live awards event. Oh sure, the dog-and-pony show that is Hollywood must go on. But at least do not ask me to pretend that the show was all that great to begin with.