Report: NYPD officers use illegal chokeholds all the time -- and are rarely punished for it 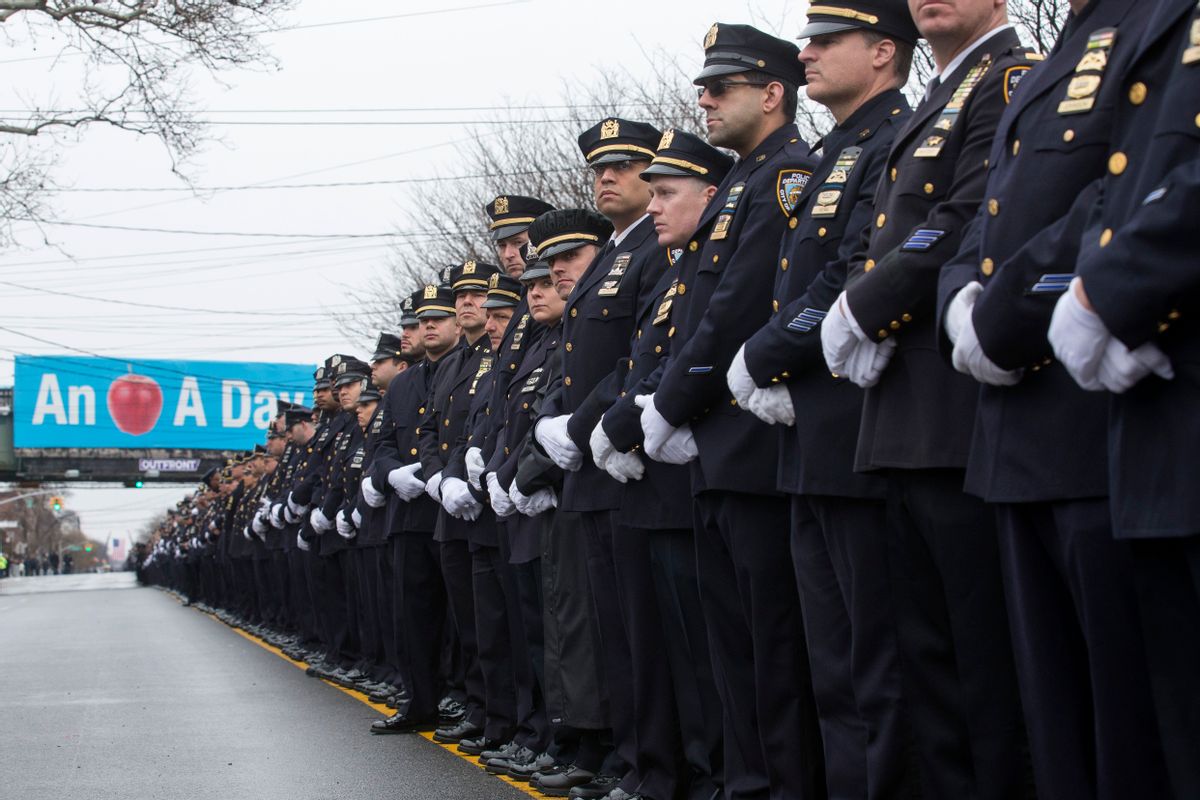 Police officers stand along the procession route during the funeral of New York Police Department Officer Wenjian Liu, Sunday, Jan. 4, 2015, in the Brooklyn borough of New York. Liu and his partner, officer Rafael Ramos, were killed Dec. 20 as they sat in their patrol car on a Brooklyn street. The shooter, Ismaaiyl Brinsley, later killed himself. (AP/John Minchillo)
--

Members of the New York City Police Department often employ illegal chokeholds when facing verbal resistance, according to a recently released 45-page report conducted by New York City's police inspector general, Philip K. Eure. The report was released after Officer Daniel Pantaleo performed the move on Eric Garner, an asthmatic man who died as a result of the confrontation.

...the inspector general's office examined the circumstances and the disciplinary actions that resulted in 10 confrontations between officers and suspects from 2009 to June 2014 in which a separate oversight agency verified that a chokehold had been used by an officer.

In each instance, the agency, the Civilian Complaint Review Board, recommended stiff discipline. However, in the cases that have been decided so far, officers were given little or no punishment by the Police Department...

The same 10 cases were also analyzed in a report last year by the review board, which found the Police Department had, over time, eased its interpretation of its own blanket ban on chokeholds.

"While the substantiated use of prohibited chokeholds by members of the NYPD in any context is troubling," the report reads, "the fact that several of the subject officers in the 10 cases reviewed by OIG-NYPD used chokeholds as a first act of physical force and in response to mere verbal confrontation is particularly alarming."

According to the New York Times, the report was set to be released in December, but was delayed after police officers Wenjian Liu and Rafael Ramos were killed in Brooklyn on Dec. 20.

In a cover letter attached to the report, Department of Investigation Commissioner Mark Peters wrote that even though the NYPD is "among the most professional and best-trained police forces in the world," the agency is not immune to criticism.

"Neither the NYPD's virtues and successes, nor its acknowledged importance to our civic life, should be used to prevent a discussion of genuine problems," he wrote. "One can respect the NYPD and still seek to address the legitimate concerns of the communities it serves."