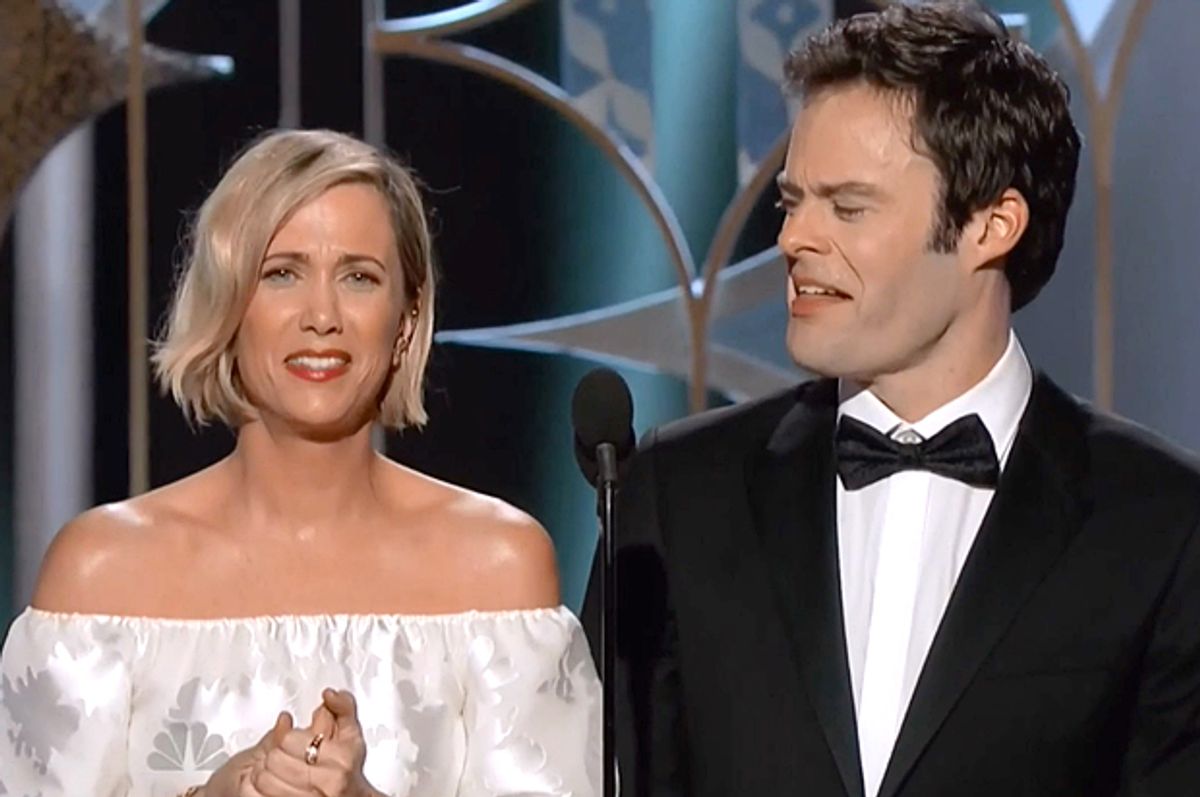 Last night, Tina Fey and Amy Poehler closed out their three-year run as co-hosts of the Golden Globe Awards. They made sure to go out with a bang by landing a biting Bill Cosby roofie joke with a didn’t-see-that-coming “Into the Woods” set-up (“Sleeping Beauty thought she was just getting coffee with Bill Cosby”) and by not sparing Cecil B. DeMille lifetime achievement award-winner George Clooney by comparing his dubious Hollywood resume to the decidedly more impressive lifetime achievements of his human rights attorney wife Amal Alamuddin. They’ll be missed next year, though there’s hope for audience-level shenanigans if they’re seated with Julia Louis-Dreyfus, who demurred when asked on the red carpet if she’d consider taking their place.

Who can fill their shoes? Last night, Ricky Gervais’ gleeful mini-roast of the celebrity crowd, a callback to his pre-Fey and Poehler era run as host, served as a reminder of how far the Golden Globes have come in the last three years. Gervais is a breath of fresh air for the cynical side of the audience, but it never seems like he can abide acting like he might be having a genuinely good time at the party. Because the Golden Globes is a night for upsets and underdogs as well as perennial achievers, a great host needs to be able to poke fun at Hollywood pageantry without deflating the fun for folks who actually aren’t hate-watching. A pair of skilled hosts is even better. Something about how two comedians can play off one another’s energy feels more generous, or at least less grandstandish, than the single host running all of the gags through one filter.

Presenting the award for best screenplay last night, “Saturday Night Live” alums and “Skeleton Twins” co-stars Kristen Wiig and Bill Hader proved they are up to the job, if they’ll take it. Unlike Fey and Poehler, whose strength lies in their coolest-kids-in-the-room wit—they somehow make it seem like an honor to be the butt of their jokes—Wiig and Hader demonstrated last night how masterful they are at playing deadpan dorky innocents, an approach that’s disarming in its silliness, especially in the context of an industry awards program, but can also allow for some brilliant moments of skewed truth-telling.

On the surface, last night’s bit was simple—to honor great moments in screenwriting, but get it wrong by misquoting famous scripts. “I looked on Wikipedia and apparently, I found out, you cannot make a movie without a screenplay,” Wiig began. Hader reacts with wide-eyed incredulity: “Whaaaaaat?!” When Wiig subtly mirrors Hader’s reaction face, they hold the moment together for just a beat before turning back to the audience and re-assuming their Serious Award-Presenting faces. It’s a genius bit of bite-sized physical comedy that flirts with the too-awkward, but pulls back just in time to mock the palms-pressed-together reverence of the overly-sincere award show tribute. They made a deceptively simple and very specific joke on everyone in the room, but at the same time, on nobody personally.

Then they went on to riff on fabricated, incredibly pedestrian quotes from “E.T,” “Titanic” and even “The Terminator,” holding them up as exemplary archetypes of the form. Judging by crowd reactions, not everyone in the room got the joke immediately—that’s a good sign. But they went for broke with dueling bad Robert DeNiro impressions and ended in a tandem Roy Scheider “Jaws” fake-quote that packed a decidedly Paul Lynde-flavored flourish, and the sillier they were, the quicker everyone caught up.

When they broke character to finally introduce the nominees for best film screenplay, they also cracked up. Those awful Schwarzenegger and DeNiro impressions, how mock-seriously they took their one job for the evening—I couldn’t help but cheer Wiig and Hader on for making themselves (not George Clooney or Katie Holmes or anyone else) look ridiculous, for not standing outside of the circle cracking wise at everyone else, but for sacrificing themselves to the joke instead, and nailing it.