EXCLUSIVE: Kristen Stewart: "People think I don't care, but no one gives more of a F*** than me"

Salon talks to the polarizing actress about "Still Alice," stardom, and life after "Twilight" 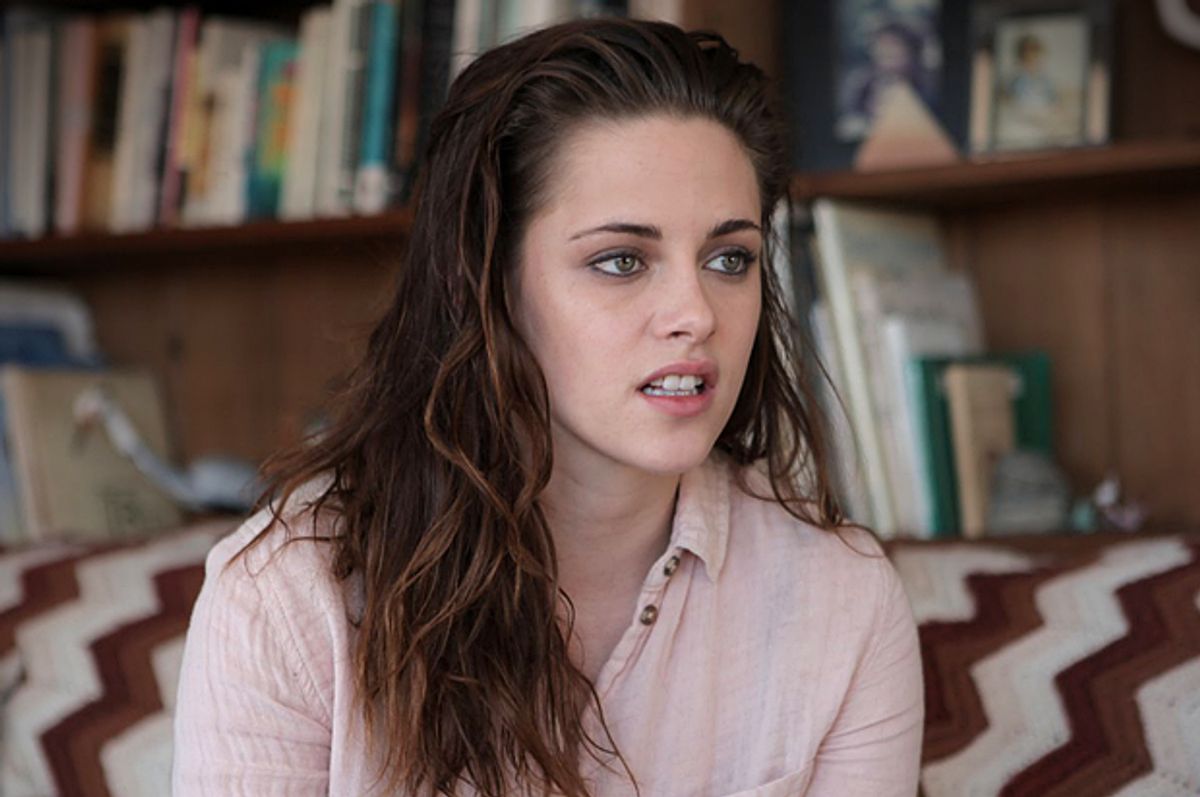 The conversation around “Still Alice” has been all about Julianne Moore, and with good reason — her performance as Alice, a linguistics professor with early onset Alzheimer's, is the role of a lifetime (and a near shoo-in for the Oscar). But hers isn’t the only good performance in the film. In particular, Kristen Stewart skillfully navigates difficult emotional territory in her role as Alice's passionate, combative daughter Lydia, who stands steadfastly by her mother through her quick and devastating deterioration. The role is Kristen’s latest in a string of indies — including Olivier Assayas' "Clouds of Sils Maria" and the Gitmo drama "Camp X-Ray"-- a notable shift away from the blockbusters she became known for towards smaller-scale, more meaningful projects.

It’s no secret that Stewart has been through the paparazzi ringer over the past few years, from being the target of Twi-hard frenzy to her public affair with "Snow White and the Huntsman" director Rupert Sanders and her much-scrutinized split with with "Twilight" costar Robert Pattinson. “I have not always been completely comfortable being shoved into the brightest, most blinding spotlight you can imagine," she tells me, in her trademark deadpan. Yet lately it seems that she has found her footing. Talking to her today at New York's Crosby Street Hotel, Stewart seems empowered by her involvement in a film that actually has the power to make a difference in peoples' lives (not to say "Twilight" didn't, but alas). As she puts it: "You can fuck around on a movie set, do this and that, make fun of things. It's like, this isn't real, we're not curing cancer. In this case, actually, we're taking one massive step towards helping people overcome something that's denied."

This probably pales in comparison to some of the junkets you're used to.

Oh my God— this is just like a little mouse scurrying behind a tiger. Yeah, this is fine. This is actually interesting and fun.

So I saw the movie yesterday, and I cried probably five times.

When you saw it, how did you feel? Were you able to have an emotional reaction to it, or did you feel some distance?

I've seen it twice now. The first time I saw it I was so blown away. I was present for a lot of what she [Julianne Moore] did that was impressive in the movie, but for the things that I was not there for she so destroyed me. I thought nobody else in the movie existed. I'm super technical, I will sit and watch one of my films with a little list of checks and balances and this finally took that away. Usually the first time is never a proper experience, it's always getting over hangups and weird memories, and this time it was just absolutely undeniable. What she does needed to be done. It's so important.

There's a lot of Oscar talk about Julianne's performance. You've worked with a lot of amazing actresses — do you think she's doing something different here?

I find that typically, the people I've worked with that have really blown me away have been really smart people who have so much space in their mind. It's not just about having emotional availability or an uninhibited nature or an imagination. She's a genius; she can do both at the same time.

I feel like you can see her intellect just from watching her perform.

She's so smart, I know! I think the cool thing about her is that she's super technical. She always knows where the camera is, she collaborates with the DP, with the director, with everyone on set. She's super aware of her environment and yet, somehow, she's soulful and lost in it. To do that, to do both of those things at the same time is what I think is absolutely undeniable. It's not good or bad or, oh, you have an opinion about it. No, that is just real.

So if anyone is debating the quality of her performance…

Is there something about playing someone's daughter that forges a connection between two actors?

Definitely. It's weird... We do the weirdest things as actors.

What sort of weird things?

If you break that down and think about it simply, it's the most bizarre behavior. It's just a way to meditate and examine and learn. [Julianne and I] feel that way about each other and I don't know why— why do I feel this way about this woman? I have known her for a number of years but there are just some people in life that you jive with, that you connect with, that you facilitate awesome things in each other. And it's palpable, it's immediate, you know it. I knew I could work with her; I knew that I could play her daughter. There are definitely people that I'd be like, I don't know if I could have that with this person.

Actors can definitely fill in blanks, and it happens all the time. You don't always have these amazing connections and these moments of— it's cheesy as fuck— real, serious, truthful, fleeting moments that you can take no credit for. They just happen. It's weird because you reap the benefits. Because I connected with Julie and because we were just able to be honest with each other in a few moments, now people say I'm good in the movie.

Well, you are good in the movie!

Thank you! But it's weird, it's a strange job to have. There's this huge grey area. It is life, you know what I mean? It's sort of a strange alternate world. It's a trip.

It's no big secret that you were frustrated with all the crazy media attention you got after being in “Twilight.” Given the smaller scale of your past three movies, would you say you've been able to start forging the career you really want?

Yeah, yeah. I've never tactfully maneuvered through anything I felt passionately about— my job being really, really high on that list. I haven't planned, I haven't thought about my trajectory or how to design my career in a way that I can get what I want. Luckily I've gotten what I wanted naturally — I'm such a lucky bastard— but I had no idea “Twilight” was going to be a big deal, it blew up. It's always hard to compare projects and I think each moment we live obviously makes us the person we are right now, so each project has a bit of a through-line because it is me at different stages of my life but they don't have anything to do with one another in terms of design.

What was it about this film that made you want to sign on?

I mean, it's so insanely ambitious. It's really rare to read a script and go, if this is done right, it's going to be very important and if it's done badly, it's going to be awkwardly bad. Julie was attached to the project when I read it so I had all of the faith in the world in her, it was just about whether I could support that. Meeting [Richard Glatzer] and Wash [Westmoreland] who directed the movie, who deal with their own seriously difficult issues that relate very closely to the story... Rich has ALS in the really advanced stages and they are living and loving and working and just shining examples. I thought, I really don't think these guys would hire me unless they thought I had the capacity to play Lydia.

Did you see that as a vote of confidence in you as an actress?

Hell yeah. She's so honorable, you know what I mean? You get to the end of the movie and you're just like, God, I hope I can stand up like that.

You realize she's almost the only one left.

She definitely is. It's awful, but at the same time it's so cool. I get to reap the benefits of having a really personal experience with Alzheimer's without the actual pain of it because i actually don't know anyone who has it but I've had this experience that has kind of given me that. I know the ins and outs of it; I've felt it; I know that pain.

Was the mood on set heightened because your director was dealing with ALS? Did that give the production an extra intensity?

It felt like we were doing something that was going to help people. Movies are fun and entertaining; that's usually the point of them but when they can actually help people and be important, it really slams you into your body in a way that most directors, no matter how great they are, how smart they are, can't do for you. The type of person that Rich is is just... you'd be lucky to meet him. Not everyone is as cool as him.

You've got to be so strong to deal with that.

Yeah, especially the way that he is. He's such a good director and just like Alice, he's so lucky as well to have Wash because he's allowing him to squeeze the last drop out of life rather than throwing in the towel. That's what the movie is about, so to have that on set...

You can fuck around on a movie set, do this and that, make fun of things. It's like, this isn't real, we're not curing cancer. In this case, actually, we're taking one massive step towards helping people overcome something that's denied. Lisa Genova's constantly talking about how we need to rip Alzheimer's out of the closet and show that this is not an old-timer's disease. It's a very real thing and there's a lot of shame in it. There's so much isolation, so much loneliness, so much denial, and so much shame, and it shouldn't be that way. We're running marathons for cancer— why aren't we doing that for Alzheimer's?

I don't know you, obviously, but it seems that you feel really good about this project. Is it fair to say that working on these sorts of deeper movies has helped you feel grounded?

Well, yeah. I'm so lucky, because it wasn't a choice. My agent sent me this script, you know what I mean? I wonder how I would be and how I would be shaped without these projects and without these insane fucking learning experiences in such isolated and accelerated periods of time. It's not only now; it's definitely cool that people like some of the projects I've been doing lately. That is awesome, but even though I have not always been completely comfortable being shoved into the brightest, most blinding spotlight you can imagine... that was always tough, but on the other side of it, what I do, I love that.

You are kind of a hero to people, in a way. A lot of people admire what they see as your give-no-fucks attitude.

I'm like, actually, no one gives a fuck like me. No one gives more of a fuck than me. It's just ironic to me. I'm always like, really?

For you it’s not about going out and pretending to love it as opposed to actually loving doing the work.

Yes. I find myself saying things that I hear other people say where I'm like, ok, you're lying. But I say the same thing, and I wonder if people think I'm lying when I say, oh, we were just a big family on set! I hate that stuff. People always ask if I chose the projects I've chosen because I'm trying to redefine myself or people's perception of me. Uh, no. In a word, nah.