"She has the flu -- and I hear she's amazing in it": The art of the Meryl Streep awards-ceremony "burn" 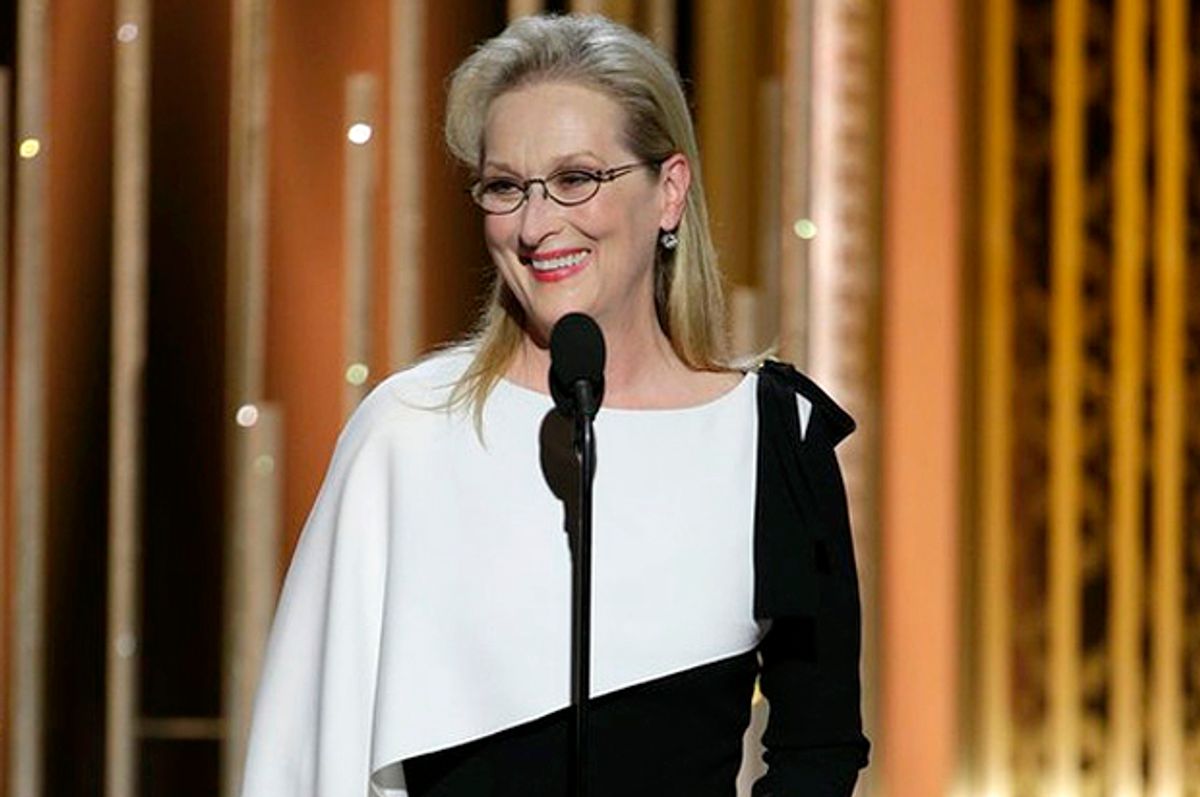 One of the lowest points of last night's Golden Globes was a tone-deaf segment in which Margaret Cho played the "newest member of the HFPA," a North Korean journalist/general who had come to the ceremony to get a copy of her magazine signed. And which of Hollywood’s many gussied-up luminaries did the racist caricature want her picture taken with? Meryl Streep, duh.

At this point, it simply wouldn’t be an awards ceremony without a Meryl Streep gag. Once known for her roles in films like "Sophie’s Choice" and "The French Lieutenant's Woman," anyone born after 1995 is most likely to know Streep less as a concrete individual than an abstract concept that gets trotted out annually around mid-January, so totalizing has her transformation into a punch line been. Meryl Streep is part of the intrinsic matter of awards ceremonies, much like golden statues and teleprompter flubs, or people getting played off before they get to thank their spouses.

Fortunately for would-be hosts looking to bulk up their speeches, Meryl Streep jokes are very simple to make: They have a common DNA, generally riffing on some aspect of the fact that a) Meryl is a goddess who can do no wrong, b) she occupies a niche unto herself, and c) she sure does get nominated for a lot of awards (although she doesn’t always win!).

In honor of awards season, we look back and rank some of the ways she has been lampooned over the years. (Note: This does not include Meryl Streep making Meryl Streep jokes — these are a beast unto themselves).

“Jennifer Lawrence has a great attitude about this whole thing. I was talking to her backstage and she told me that whether she wins or loses, it’s just an honor that Meryl Streep wasn’t nominated.”

Boring. We get it; the woman gets a lot of nominations. Once again, we wish MacFarlane had gone with something a little more risque here (although please, not something that mentions boobs).

“I really do think it's been an exceptional year for movies. One of the nominees is "Her." And by her, I mean Meryl Streep. Meryl has been nominated for an Oscar a total of 18 times. It sounds good, but if you do the math, between dresses, hair and makeup, that's hundred of thousands of dollars. Simply put, Meryl cannot afford to be nominated again. That is a lot of money.”

Ditto above, we get that Meryl has been nominated a lot of times, but the punch line here kind of falls flat.

6. Jennifer Lawrence, accepting an award at the 2013 Golden Globes

J. Law’s joke utilizes a popular comedic tactic, the callback (in this case, to Bette Midler's role in "First Wives' Club"). However, this joke falls low on the list because nobody understood it at the time and Lawrence had to explain it afterward. Cardinal rule of Streep joke-making: Make sure people can understand it. (Still, bonus points for doing this one off-the-cuff.)

“There’s Meryl Streep, who celebrates her record 17th nomination for her portrayal of Margaret Thatcher in “The Iron Lady.” It’s funny, when she was offered the role of the toughest skirt in 1980s Britain, she thought she was being asked to play Boy George.”

Not really about Meryl, but good joke construction here with a lot of moving parts.

“Meryl Streep is not here tonight. She has the flu — and I hear she’s amazing in it.”

Because she's a good actress, get it!? Simple and to the point, this is a good, middle-of-the-road Streep standard.

A nice bit premised on conflating Streep with her "Devil Wears Prada" character, this gets high billing because it actually has logical context, instead of just being a random shout-out. (It's also nice to look back on the time when Anne Hathaway could do gags at awards shows without being afraid of incurring the universal wrath of the Internet.)

"Fifteen career Oscar nominations. That's a record. I hate to say it but when someone puts up numbers like that, it's just hard not to think steroids.”

Also a good one because it ties evergreen Streep material in with current events (A-Rod’s revelations about steroid use), while playing on the familiar riff of Meryl’s many nominations.

"Everyone who's ever worked with Meryl Streep says the same thing: Man, can that woman act, and what's up with all the Hitler memorabilia?"

The best Streep jokes skirt the line of tastefulness, and this one, referencing her role in "Sophie's Choice," is a timeless classic. Top-notch work.