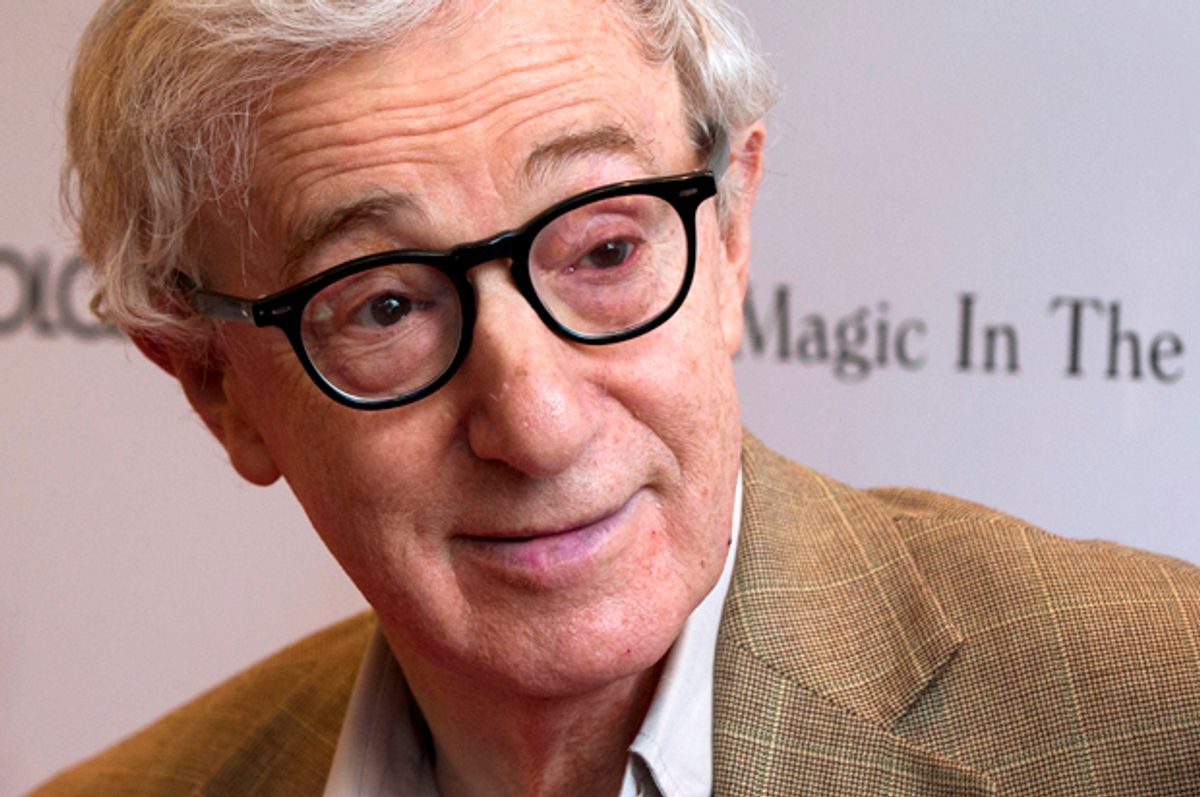 “Chapter One: He adored Amazon. To him it was a metaphor of the decay of industry, built on easy wish fulfillment and the overindulgent binge. The two-day shipping and frustration-free packaging, the easy return policies and now the award-winning television streamed right to your lap felt like the easy way out of filmmaking—no, it's gonna be too preachy, I mean, you know, let's face it, I wanna sell some TV here.” —a version of “Manhattan” we thought we’d never see

Woody Allen has signed with Amazon to write and direct his first television series. There are few details about his as-yet-untitled show, like whether or not he will set his story in his beloved New York or how large the spread of ages will be between the protagonist and his female love interest, but curiosity is, of course, running at peak level.

Late in his career, the embattled filmmaker has found himself trapped inside the Academy of the Overrated, his “Manhattan” gag-prison of out-of-fashion geniuses. Everyone has their idea of what a Woody Allen Film should be and the many ways in which his recent efforts have fallen short of their ideal, but the redefinition of an Allen story or an Allen character for the small screen opens up new possibilities—not to mention audiences. Allen has never lost his sense of style or his ear for dialogue, but film hasn’t felt like a right fit for his quirky characters and stories for a while now—since 1999's "Sweet and Lowdown," one could say. Moving to Amazon's Instant Prime, where they’re celebrating a big artistic win this week thanks to two Golden Globes for the acclaimed Jill Soloway series “Transparent,” could be the shot in the arm Allen needs to invigorate his storytelling approach.

Even Allen’s recent movies that have worked—“Blue Jasmine,” which netted the luminous Cate Blanchett an Oscar, and the whimsically melancholy “Midnight in Paris,” which even won an Academy Award for its screenplay—felt like decent efforts compared to his past glories. “Blue Jasmine” could have been an amazing TV series, but constrained to a couple of hours, the complex internal story unspooled too swiftly for a film about the disastrous unraveling of a woman’s intricately crafted façade. "Midnight in Paris" felt like a return to form for Allen when it premiered, but looking at it with fresh eyes, it's charming but a bit slight. It would have been cool to see it as a bite-size miniseries, with each fascinating historical artist getting his or her own focused episode, allowing the tension over whether Gil can or will rejoin the 21st century to build over a few weeks rather than one sitting.

It's too easy for quirky, stylized comedies like Allen's best efforts to get lost in the blockbuster shuffle these days, but television, especially on-demand streaming, allows a show to build a buzz and a following over a bit of time without the demands of the box office or the Oscar race. On TV, protagonists who aren’t conventionally likable—Hannah Horvath, Piper Chapman, Walter White, Rust Cohle—can develop a cult following because they have the time and the space to reveal their dimensions to an audience that pays attention, and fascinating prickly characters are Allen's biggest strength. So are quirky comedies—HBO's late "Bored to Death" felt in many ways like his artistic grandchild. He could even get away with a self-aware approach to a late-April-December romance on TV, with the right casting and the right script (and, again, a giant dose of self-awareness).

Speaking of self-awareness, it’s especially fitting that Allen, the target of an ongoing controversy concerning allegations by his adopted daughter Dylan Farrow that he sexually abused her when she was a child, has ended up working with Amazon, a company that seems to relish its position as a disrupter, if not actual antagonist, to the creative industry. Amazon does what’s good for Amazon, always, and makes no apologies about it.

It’s hard to imagine Allen’s “Manhattan” protagonist Isaac Davis getting excited about writing and directing a show for the TV arm of a giant virtual department store, but today’s New York and entertainment industry would be unrecognizable to him in 1979 anyway. In the film, Isaac (played by Allen) loathed his lucrative but spiritually empty TV writing gig that kept him from writing his novel. When Diane Keaton’s Mary laughed at his hero Ingmar Bergman and praised his TV work instead, Allen seemed to include that scene to portray Mary as a deliberate contrarian: “I mean, you write that absolutely fabulous television show. It's brilliantly funny, and his view is so Scandinavian. It's bleak, my God. I mean, all that Kierkegaard, right?” It’s a line that seems oddly prescient today, when the idea of quitting a show-running job to write a novel in order to regain your professional self-respect seems downright quaint, if not utterly ridiculous. Isaac might have whined about writing for “an audience that's raised on television” whose “standards have been systematically lowered over the years,” but now Allen faces writing and directing for an audience whose standards have been astronomically raised by TV, prestigious and not-quite-so, over the last decade. He might find it a welcome change of pace.