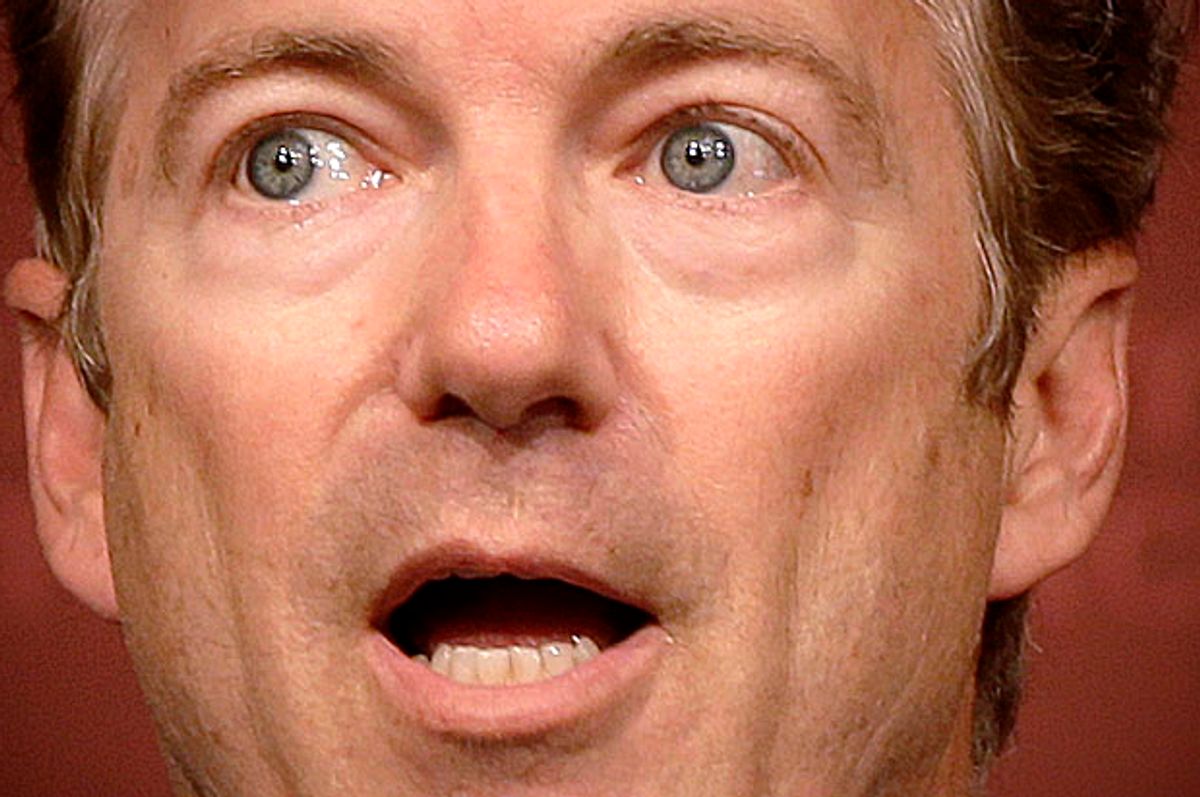 How's that GOP rebrand going, you ask? Just in the last few days, a Republican congressman compared President Obama to Adolf Hitler; it emerged that Steve Scalise, the third-ranking House Republican, who spoke before a white supremacist group in 2002, voted as a Louisiana legislator against apologizing for slavery; and the GOP-controlled House passed a bill that would overturn President Obama's executive actions sparing up to 5 million unauthorized immigrants from deportation. Meeting with legislators in New Hampshire on Wednesday, likely GOP presidential hopeful added disabled people to the group of Americans the party has insulted this week.

The Kentucky senator asserted that the Social Security benefits program is riddled with fraud, with most people who draw benefits suffering from nothing more serious than anxiety or back pain.

"The thing is that all of these programs, there’s always somebody who’s deserving, everybody in this room knows somebody who’s gaming the system. I tell people that if you look like me and you hop out of your truck, you shouldn’t be getting a disability check," Paul said. "Over half the people on disability are either anxious or their back hurts. Join the club. Who doesn’t get up a little anxious for work every day and their back hurts? Everyone over 40 has a back pain."

The disability insurance program, which is part of Social Security, has come under scrutiny after two media reports last year that focused on rising enrollment and implied that it was at least partly due to fraud. But the reality is different: fraud in disability programs is estimated to amount to less than 1 percent and is extremely rare, as the agency’s watchdog has found. Its inaccurate payments rate is also less than 1 percent, compared to about 8 percent for Medicaid and Medicare.

The benefits are also very hard to come by. Fewer than four in ten applications are approved even after all stages of appeal. Medical evidence from multiple medical professionals is required in most cases to determine eligibility, which means showing that an applicant suffers from a “severe, medically determinable physical or mental impairment that is expected to last 12 months or result in death.” The severity of the disabilities of those who get benefits is underscored by the fact that one in five men and nearly one in six women die within five years of being approved.

Moreover, Covert observes, disability payments average just $1,130 per month; it's hardly like recipients are living on Easy Street. Still, Republicans began the 114th Congress by introducing a measure that prohibits the transfer of funds between disability insurance and Social Security's retirement trust fund, even though a rising population has put the disability program under stress and the measure could result in disability payments getting slashed by 20 percent, Covert notes.

Rand Paul's remarks today mark merely the latest expression of callousness toward a vulnerable group to come from the Paul family. During his 2012 presidential campaign, Ron Paul was asked during a GOP primary debate how he'd respond to the hypothetical case of a 30-year-old man who could afford insurance but chose not to buy it -- and then wound up in intensive care with a catastrophic malady. After Paul muttered a response about personal responsibility, members of the debate crowd shouted, "Let him die!"

Rand clearly knows a thing or two about the id of today's Republican Party.

Watch is remarks below, via Think Progress: