Nuns gone bad: Why you should read this lurid tale of a lesbian nun sex gang 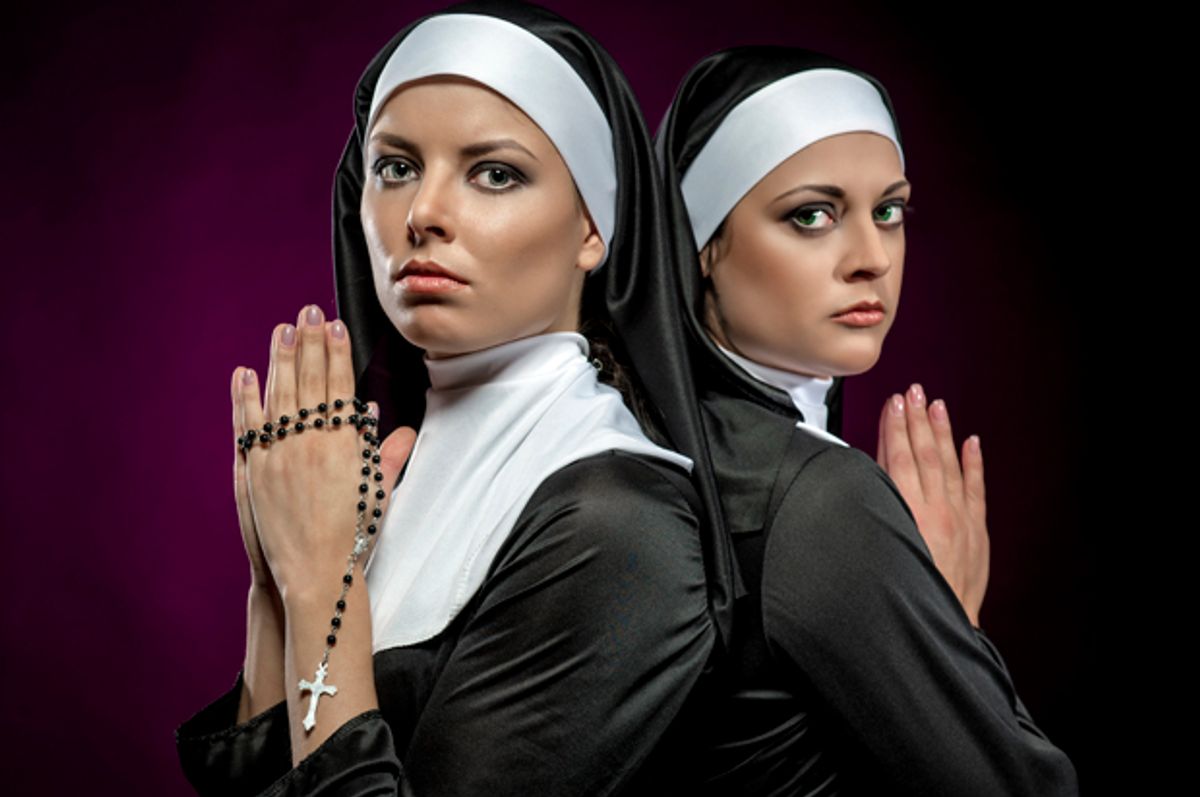 In the summer of 1859, a desperate nun in the Roman convent of Sant'Ambrogio sent a letter to her kinsman, a bishop in the Vatican. She pleaded with him to rescue her, claiming that she had been the target of several poisonings and was in mortal danger. When her cousin the bishop answered her call and arrived at Sant'Ambrogio, he promised to rescue her and soon delivered on that promise. From his estate in Tivoli, the relieved but traumatized Katharina von Hohenzollern-Sigmaringen began to draft a denunciation of her one-time sisters back in Rome. It was an accusation more lurid than any popular anti-clerical satire, full of sexual transgressions, heretical practices and homicidal schemes. Furthermore, the case against the convent of Sant'Ambrogio had tendrils that climbed up to the highest reaches of the Church and entwined around the great Catholic controversies of the day.

Hubert Wolf's "The Nuns of Sant'Ambrogio" offers a learned yet fascinating account of this incident -- little known because the Vatican kept most of the embarrassing details in-house, a policy it would employ when handling sexual-abuse scandals a century later. In fact, the Sant'Ambrogio case was itself a sex-abuse scandal, although that aspect, however sensational, was not necessarily the Church's primary concern.

Katharina, a Hohenzollern princess, belonged to one of the great royal Germanic dynasties, which include the Hapsburgs. (Her granddaughter was the queen of Portugal.) Twice widowed and sickly, she entered the convent in her late 30s, seeking a "a place of cloistered peace and holy order" in which to live a contemplative life, although she also nurtured the dream of establishing an order of her own. Sant'Ambrogio was "enclosed," meaning that the nuns were sequestered from all contact with the outside world apart from rare interviews conducted through metal bars and visits from priestly confessors or doctors. Only in emergencies were men, even priests, allowed within the clausura, or convent interior.

This quiet regimen seemed just the ticket for the weary, devout princess, but no sooner had she take the cloth than she began to notice troubling aspects to convent life. The problems centered around Sister Maria Luisa, a nun in her early 20s who had somehow acquired multiple positions of authority in the order, including the title of novice mistress (overseer of the novices). Maria Luisa, although of lowly birth, was beautiful, intelligent and extremely charismatic. Even in writing her accusation, Katharina could not refrain from praising the novice mistress' "superior elegance and ease in conversation" and her display of "the utmost delicacy in her dealings with others."

The princess had been a bit troubled by the way the sisters of Sant'Ambrogio venerated their convent's late founder, Maria Agnese Firrao, and even more troubled by the similar cult that had formed around the very-much-alive Maria Luisa. The novice mistress received frequent visions, messages and even letters from such heavenly personages as the Virgin Mary and Jesus himself, wore holy rings supposedly bestowed on her by the same parties and seemed to have everyone from the abbess to the convent's confessors wrapped around her little finger. Maria Luisa even seemed to be hearing confessions and performing some kind of exorcism on a troubled man known as "the Americano" (he was in fact Tyrolean). The authority to perform these and other sacred rites was reserved strictly for priests -- and not all priests, either.

What really sent Katharina over the edge, however, was a letter from the Americano, written in German, that Maria Luisa showed her because the novice mistress herself could not read the language. According to Katharina (the letter was never produced at trial), the man used "extremely obscene expressions" and, as Wolf puts it, "more or less asked both nuns to engage in sexual acts with him."

This tended to confirm Katharina's growing impression that there was something improper not only to Maria Luisa's interactions with the Americano, but also to her relationships with both her confessor, Padre Peters (with whom she spent much time alone), and the other novices. Furthermore, she'd also begun to suspect chicanery in the various miraculous events associated with the novice mistress, such as the fragrance of roses her body emitted when she experienced her visions. Once Katharina began to challenge Maria Luisa's claims to sanctity -- claims supported by most of the other nuns and the two confessors assigned to the convent -- she began to get very sick and to detect strange flavors and colors in the food and medicines she was given.

Upon receipt of Katharina's denunciation, Pope Pius IX ordered an investigation, itself a tricky business since the convent at Sant'Ambrogio had many influential Jesuit supporters among Vatican higher-ups. The investigating judge, however, was a Dominican friar, and determined to get to the bottom of the doings at the convent. Note: I'm simplifying the byzantine network of conflicting parties and interests within the Vatican here, although Wolf does a fine job of laying them out. Likewise the densely impacted bureaucracy of the Church's legal system, including the Inquisition, which would ultimately rule on the case with the pope's approval.

What the Dominican would discover was a secret, cultlike veneration of Maria Agnese Firrao, featuring stories that she "trapped her tongue under a heavy stone for five to six minutes" to prevent blasphemy and wore "an iron mask containing 54 pointed nails," and other tales of self-mortification. Maria Agnese was also reputed to have performed miraculous healings, and the sisters kept such relics as the scourges she used on her body, as well as other less grisly possessions, in the belief that they retained sacred powers. In short, they treated the founder of their order as a saint, even though decades earlier the Inquisition had invalidated Maria Agnese's claims to that status, sent her into confinement in another convent and ordered her to have no further contact with her "daughters."

This quasi-heretical behavior on the part of the sisters was what most piqued the Inquisition, whose role was primarily to sniff out and punish violations of Catholic doctrine. But authorities were also dismayed to discover that Maria Luisa had compelled a series of novices into sharing her bed and had engaged in various forms of sexual intimacy with them. The night before novices were to profess their vows, they participated in rites that included dancing around in their nightshirts and spending the night in bed with the novice mistress, "often in a fierce embrace."

All this, Maria Luisa claimed, served as "purification" (her preferred targets seemed to be older women with some sexual experience, that apparently left them tainted) and had been established by Maria Agnese, the order's founder. Invoking the biblical Elijah, she claimed that "God gave the founder the gift of being able to impart her virtue, her spirit, her purity, by laying herself over a nun. She would examine the nun and made the sign of the cross in her private parts, to purify her. And as she did this she filled her with a special liquor." The investigator also learned that the novice mistress has secretly enlisted a novice with beautiful handwriting to pen letters ostensibly from the Virgin Mary to Padre Peters. In these, the Holy Mother urged Maria Luisa's confessor, to engage in an erotic "blessing" with the novice mistress that would invest her with the power to bless her novices. He complied.

As Wolf explains, what was going on in Sant'Ambrogio was both conservative and insurrectionary. The scandal came toward the end of what religious historians refer to as "the Marian Century," during which devotion to the Virgin Mary, and apparitions of the Holy Mother to believers, boomed. With their visions and healings, the nuns of Sant'Ambrogio invoked the female mystics of the Middle Ages, like Saint Catherine of Siena, whose famous description of her ecstatic visionary wedding to Christ has heady, erotic overtones. Their male supporters within the Church hierarchy sought a return to tradition and mystery against a vein of liberal Catholicism that wanted to modernize the Church by reconciling it with science, secular governments and Protestants.

At the same time, women like Maria Luisa could use the iconography of female mysticism and sainthood to accrue official and personal power ordinarily denied to Catholic women. Despite her age and humble origins, the novice mistress dominated the convent to the degree that she could operate as a sexual predator and manipulate even her own confessor into acts that violated his vows. Maria Luisa would eventually testify that she only did these things because she believed them to be the duties of a leader of her order as laid out by Maria Agnese. However, this woman changed her story so many times and told so many lies it's impossible to know the truth of that. One thing is certain: Maria Luisa was ambitious and planned to found a convent of her own. At first she eagerly welcomed Katharina von Hohenzollern-Sigmaringen as a wealthy and well-connected potential supporter. Later, she tried to kill her before the princess revealed what was really going on behind the convent's walls.

Wolf, who found the records of this investigation in an unlikely corner of the Vatican archives, makes the most of his story, including a late twist in the plot that involves the secret identity of one of the major figures. As a church historian, he has an enviable handle on the palace intrigues motivating all the players, but only rarely lapses into excessive detail. He also deploys a broader perspective, pointing out that the overwrought and eventually homicidal climate of Sant'Ambrogio is not so surprising in "total institutions" like an enclosed convent. He doesn't, perhaps, have quite enough perspective to peg the Catholic Church as aspiring to the same level of control over its members' lives. What the bizarre affair of the nuns of Sant'Ambrogio demonstrates is that power works in unpredictable ways both outside and inside of institutions. No one can be trusted to hold too much of it.