With Obama's moves to expand workers’ paid family leave, U.S. may join rest of the world -- no thanks to the GOP 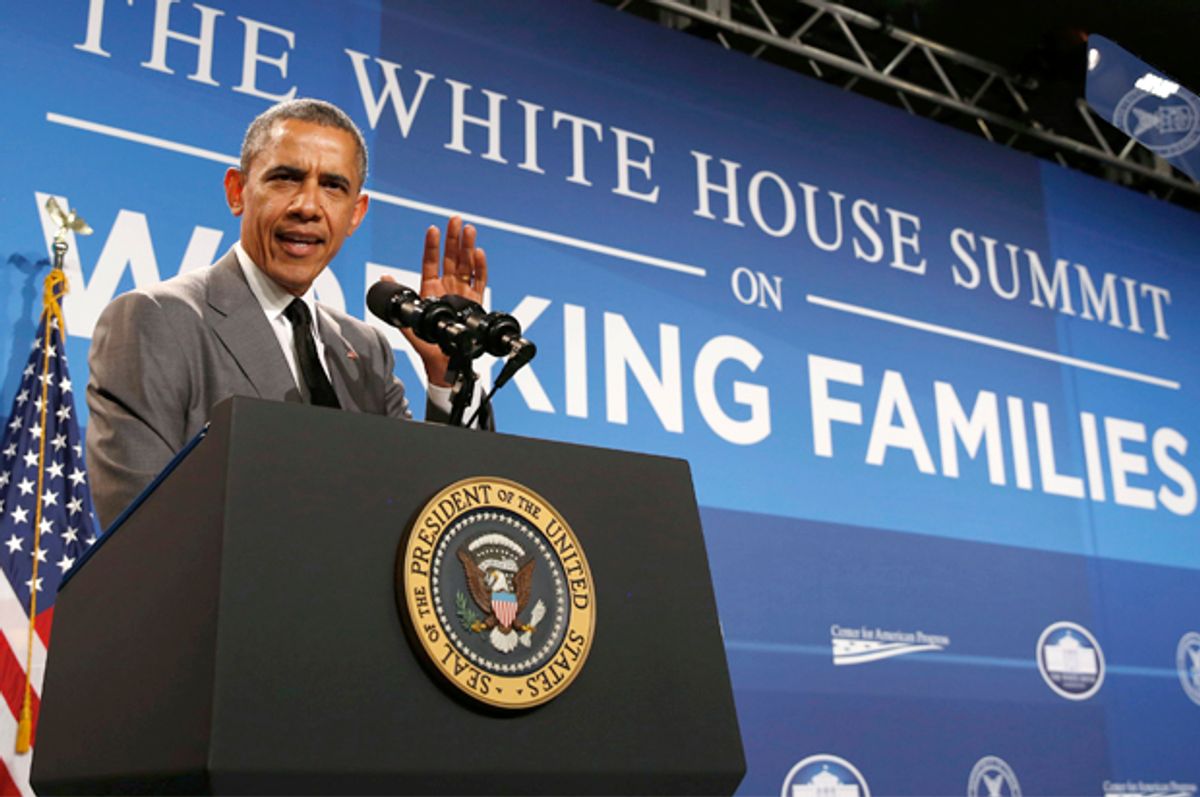 President Obama continues his recent crusade to bring American social policy into the 21st century Thursday with new initiatives to expand the number of Americans who have paid family leave and paid sick leave.

Alone among industrialized nations in not offering paid leave for new parents to care for a child, or paid sick days, the U.S. has a two-tiered system, where well-paid women get paid time off from their employers, and working class women don’t. Only 10 percent of women in the bottom quartile of earners have paid family leave, compared with 71 percent in the top quartile. The numbers are similar when it comes to paid sick leave: 43 million American have none at all, and that includes 86 percent of bottom-quartile workers.

That means a lot of women in influential business and policy positions don’t recognize the need for government action on those fronts. When I asked former Wisconsin gubernatorial candidate Mary Burke, a businesswoman, if she favored paid family leave last October, she told me she’d have to research the need for it. “If it’s an issue that really needs attention, and people aren’t being covered through plans by their employers, then I think that’s something to be looked at. But it’s not going to be a priority now.” While I appreciated her candor, I was surprised a Democrat didn’t know it was “an issue that really needs attention.”

The president’s initiative would provide $2.2 billion to reimburse states that develop paid family and medical leave programs, plus $35 million for those that are exploring such a move. The Department of Labor will put $1 million in already allocated funds to keep helping states and cities do feasibility studies on the issue.

The president is also directing federal agencies to allow workers to use up to six weeks in advanced sick leave as paid family leave, though they will have to pay it back.

When it comes to paid sick leave, Obama is endorsing Rep. Rosa DeLauro’s Healthy Families Act (co-sponsored by Sen. Patty Murray, since Tom Harkin retired), which requires employers to provide at least seven days of paid sick leave. But so far he’s not supporting the Family and Medical Insurance Leave Act DeLauro is co-sponsoring with Sen. Kirsten Gillibrand. When we spoke a few months ago, de Lauro told me talks with the administration were continuing and she was “optimistic.” On a conference call Wednesday night, Jarrett did not rule out backing federal legislation eventually, but said “we’re not going to just wait for Congress.”

“I applaud President Obama’s announcement and appreciate his endorsement of the Healthy Families Act, which I first introduced in 2005 with Senator Kennedy,” DeLauro said Thursday in a statement.  “The fact that the United States is one of just a handful of countries that does not require paid family or sick leave is nothing short of shameful. I will be reintroducing both the Healthy Families Act with Senator Murray and FAMILY Act with Senator Gillibrand to change that reality for American families very soon.”

For now, Obama’s focus is pragmatic, since paid family leave legislation is unlikely to go anywhere in an increasingly conservative Congress. States and cities, particularly those led by Democrats, are where the action is, and the administration’s moves reflect that opportunity. California, New Jersey and Rhode Island all have paid family leave; Massachusetts just voted for paid sick days, even as it elected Republican Gov. Charlie Baker.

De Lauro and Gillibrand’s bill is important, however, because it creates a funding mechanism for paid family leave, similar to disability insurance. Employers and employees would contribute two-tenths of one percent of salary – an average of $2 a week for most workers – that would fund leaves up to 12 weeks when an employee has a child or needs to care for a sick family member.

The funding mechanism means employers aren’t paying a full salary at a time when they’re losing a worker for up to three months, which could make it easier to get temporary help. Just as important, family leave becomes an earned benefit, not a top employee perk, not a welfare program, and not a benefit to be cut back in tough economic times.

“This is not a partisan issue; this is a family issue, and it’s an economic issue,” Jarrett said in Wednesday night's conference call.

It shouldn’t be a partisan issue, but increasingly, it is. President George H.W. Bush vetoed the first Family and Medical Leave Act. Future House Speaker John Boehner promised the legislation would "be the demise of some [businesses]"  and that "the light of freedom will grow dimmer."  It wasn't, and it didn't.

Still, the bill signed by President Clinton in 1993 had the backing of 19 Senate Republicans and 40 in the House. There would be no such bipartisan support for a paid leave bill today.

The good news is that many companies are recognizing the benefits of paid family leave on their own. When Google increased paid maternity leave to 18 weeks in 2007, the rate at which new mothers left the firm dropped by 50%. In California, 91 percent of employers now say the law either has no effect or positive effects, though most opposed it when it was passed.

Obama’s moves are another sign that activism is moving to the state and local level in an era of federal gridlock. But taken together with his community college initiative, and House Democrats’ progressive tax plans, the plan is another sign that Democrats are finally crafting social policy for the 21st century, leaving Republicans to continue to try to repeal the 20th.