What Bill Cosby said to my mom

His flirtations made her feel feminine at a difficult time. But the charm that delighted her makes me cringe now 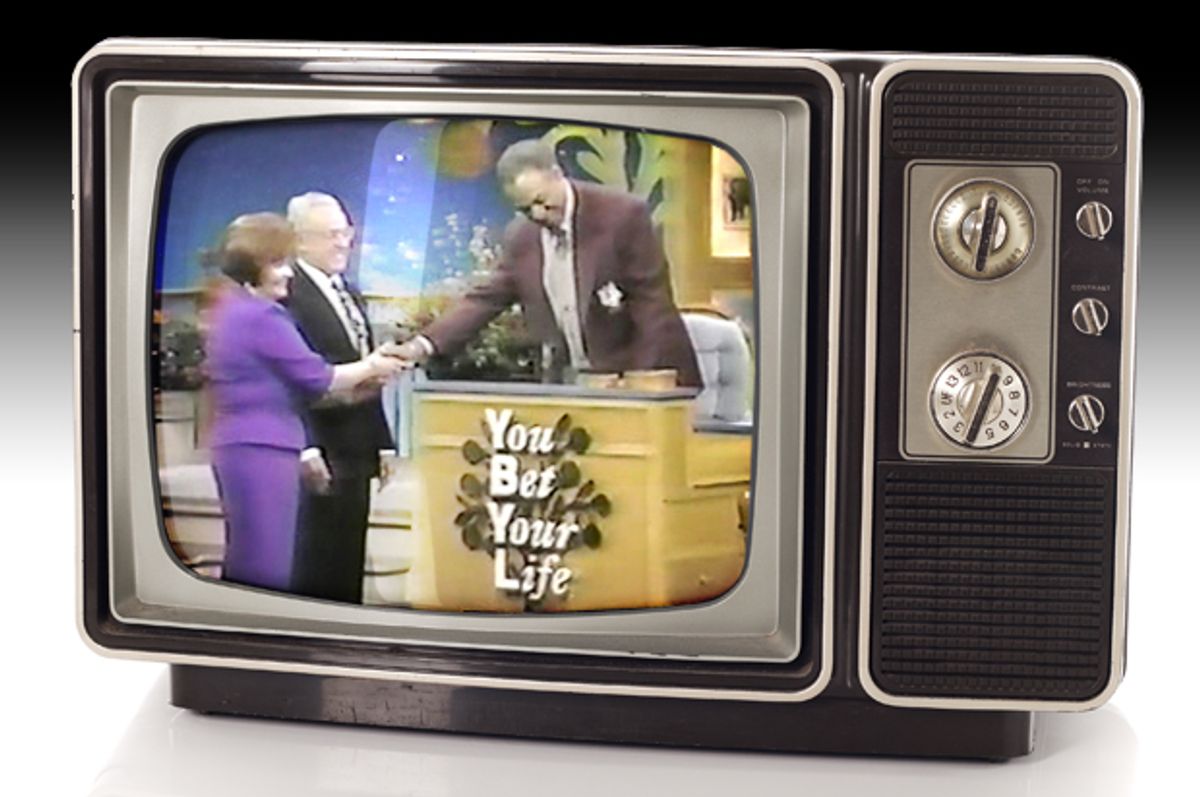 A week after my mom’s mastectomy and grim prognosis (the surgeon said the tumor was the biggest he’d ever removed) she received a phone call from the short-lived TV game show “You Bet Your Life,” inviting her to Philadelphia as a contestant. Unbeknownst to me, she’d sent an application to the show months earlier because she was a fan of the show’s host Bill Cosby.  Actually, she had a crush on him. “He went to Temple University too,” she told me proudly.

More than 20 years later, we all know the latest about my mom’s celebrity crush. Stories from women saying they were raped—and often drugged—by Cosby are piling up so fast I can’t keep track. Their stories, which are remarkably similar, suggest that Cosby’s chosen method of abuse involved charming women, rendering them unconscious, and then raping them.

In the beginning of each episode of “You Bet Your Life,” before the question-and-answer period began, the contestants talked about themselves. They stood awkwardly next to the contestant, a stranger they’d just met, and recounted highlights from their lives. After these introductions, Cosby pulled flashcards from a stack and dramatically waved them around before reading the questions aloud. One of the show’s main props was a stuffed toy, a black duck dressed in a Temple University sweat shirt that dropped down on a wire and flopped around in front of the contestants. Once the duck settled in, the contestants decided together which of the three envelopes attached to the sweat shirt they wanted, and then Cosby plucked the envelope, opened it up and revealed their winnings.

After getting invited onto “You Bet Your Life,” my mom told me that she was worried about what she might say to Bill Cosby.  She was concerned that she wasn’t interesting enough to talk about herself on TV.  “I’m just a high school English teacher,” she said. “What do I have to say?” I took the opportunity to remind my mother of her second marriage to a Palestinian sex therapist in the 1970s. I reminded her how she and my stepfather joined a nudist camp in Topanga Canyon called The Elysium, how they interacted with the famous researchers William Hartman and Marilyn Fithian, who were called the Masters and Johnson of the West Coast, and how my stepfather was part of their study on the multi-orgasmic male.

I told my mom to share a little bit of this when Bill Cosby asked her questions on the show—not too much, I warned.  Be provocative, I said, but not too provocative.  By this time, it had been two decades since her marriage to my stepfather had ended, and she was as far away from her nudist lifestyle as she could be. She wore floral dresses, pantyhose and high heels, and carried designer handbags she bought half-price at Loehmann’s.  Before her illness, a few times a week, she would walk on the beach in front of her apartment in stretchy black leggings, white tennis shoes, carrying her walkman in a fanny pack, listening to Lena Horne.  Her students, colleagues and current friends had no idea of the life she’d led in the 1970s. Sometimes, when I’d bring up The Elysium, she’d shake her head and say, “What was I thinking?” or “Who was I?”

My mom was diagnosed at 54, and I watched her die five and a half years later.  I think about her every day and probably talk about her to my husband and friends more than I should. To remind me of the way my mom talked and moved, the expressions she made, I’ve kept two videos taken while she was alive. One is from a few years before her diagnosis and shows her getting a free makeover at the Lancôme Counter at Macy’s at South Coast Plaza.

The second video is of her appearance on “You Bet Your Life.” I remember standing with her at the terminal at LAX, saying goodbye to her before she boarded her flight to Philadelphia, the city where, it so happened, she was originally from. She was giddy and excited as she hugged me goodbye. She’d spent the last 30 years in Southern California, so the trip represented not just the chance to be on TV and meet the comedian she’d admired for years, but also a sort of homecoming.

In the video of the game show, she wears a purple skirt and jacket, a reddish wig, and, under her clothes, a rubber prosthetic breast. She stands next to a retired judge she has just met, a sweet, white-haired man named Jesse James who says he is related to the notorious Jesse James. As Jesse tells his personal story, relishing his last few seconds, it’s clear from my mother’s face that she’s more than ready with her own. She’s leaning forward, full of anticipation, wanting Bill Cosby’s attention, and confident that she’s going to get it.

Much of the contestant’s information had been compiled earlier, and right before he greets my mom, Cosby glances down at his podium for a prompt. “It says here you’ve been married twice,” he says. He seems to like her immediately, and they go back and forth about her first husband (my dad) being Jewish and her second husband being an Arab sex therapist who participated in that multi-orgasmic-male study. They talk about the fact that they both attended Temple University.  Cosby might have been the famous comedian, but it was my mom’s timing that was impeccable.

My mom: “I remember very well.”

Cosby: “…what number are you?”

At this point, Jesse James turns to my mom.  “You walked into that one,” he says.

And my mom responds, “I surely did.”

My mother, having so recently had her breast taken from her, along with her hair and her assumptions about the future, obviously enjoyed the flirting and overt sexual innuendo. But I can’t watch the video today without thinking of the many women who say Cosby assaulted them. I’m struck by my mom’s coyness, the coquettish way she stares up at him. There’s no denying that she came to life standing across from him on the stage, that she obviously felt appreciated, attractive and funny.

After she returned from Philadelphia, we sat together on the couch, watching the tape.  I remember finding the whole interaction charming. Now, though, it makes me cringe—not only her conversation with Cosby, but my own role in encouraging the provocative repartee. In the time it’s taken me to write these words, more than 30 women have come forward to accuse Cosby.

I am grateful that when my mother was a college student at Temple University, she never met or interacted with Bill Cosby.  And I’m sorry to the women who say they’ve been assaulted by him and saddened by the possibility that they might have seen my mom happily flirting with him on TV.

My mom and Jesse James won $7,700 on “You Bet Your Life” that they had to split. The few thousand dollars became a down payment for a new car that my mom drove until she was too sick to drive. I used the car for several years after she died, and often thought about its origins.

My mom told me that after the cameras stopped rolling, she leaned over and whispered in Bill Cosby’s ear.

“What did you say?” I wanted to know.

“I told him that I only had one breast,” she said.

Lisa Glatt is the author of the novel “A Girl Becomes a Comma Like That” and the story collection “The Apple’s Bruise” both published by Simon & Schuster.  Her novel “The Nakeds” is forthcoming in June 2015 from Regan Arts.