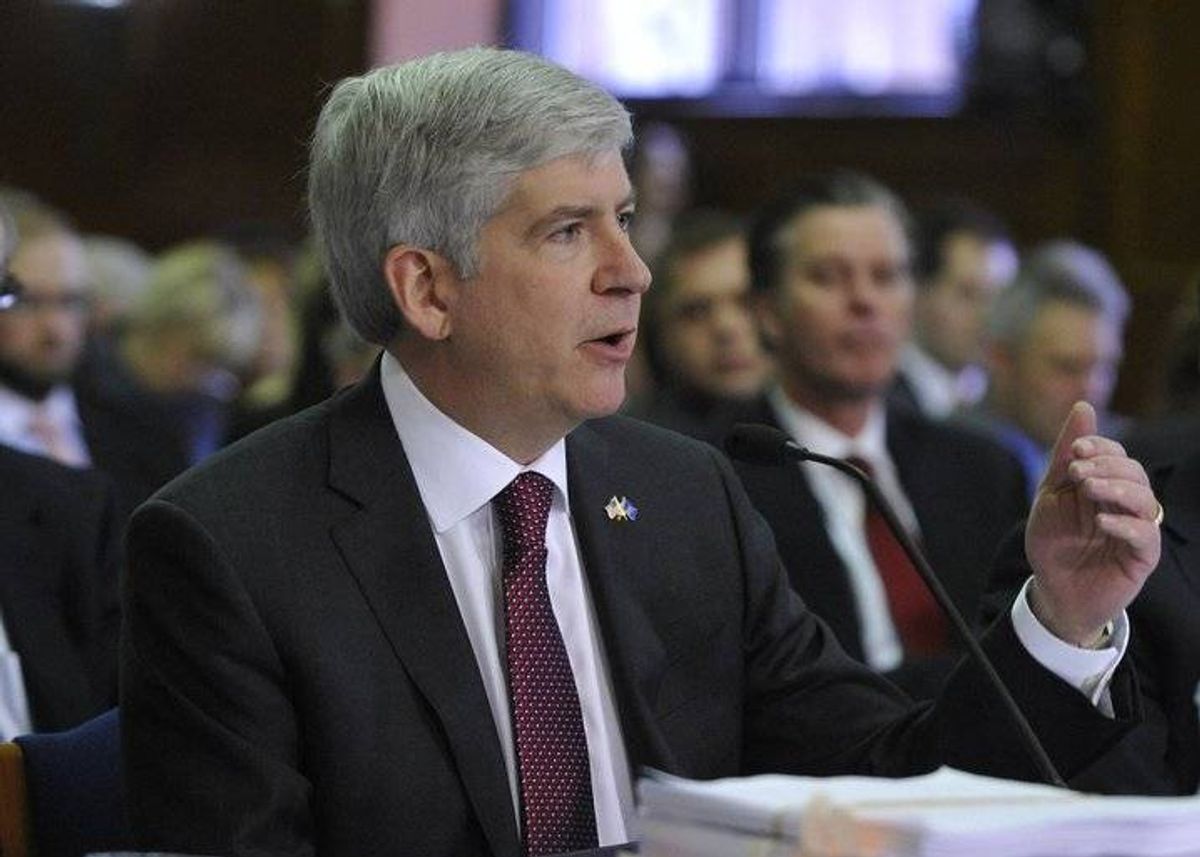 Michigan Gov. Rick Snyder on Thursday broke with fellow Republicans and the National Rifle Association to veto legislation that would have lifted a ban prohibiting people subject to restraining orders in stalking and domestic violence cases from getting concealed carry permits. According to the measure, which was approved last year by the Republican-controlled state Legislature and was backed by the National Rifle Association, only people with felony domestic violence convictions or those subject to a restraining order that specifically prohibits them from buying or possessing guns would have been automatically denied the permit.

In a statement on the veto, the Republican governor expressed concern that the changes would have further endangered the lives and safety of victims of intimate partner violence and stalking. “We simply can’t and won’t take the chance of exposing domestic abuse victims to additional violence or intimidation,” Snyder said. “There are certainly some reforms that can improve the way Michigan issues concealed pistol licenses and we support the rights of law-abiding firearm owners, but it’s crucial that we leave in place protections for people who already have endured challenges and abuse.”

S. 789 would have provided enhanced protections for victims of domestic violence -- a point purposefully ignored by opponents of the bill -- by allowing an individual who petitions the court system for a PPO to automatically qualify for a temporary emergency concealed pistol license. The NRA advocated for this provision because victims of these heinous acts should be able to avail themselves of all legal methods to ensure their personal safety and the safety of threatened family members.

So the measure would have fast-tracked a victim’s ability to obtain a concealed carry permit if they filed a restraining order against a violent partner. So rather than trying to remove guns in abusive situations, the NRA advocated to bring in even more guns.

As I’ve pointed out before, the presence of a firearm during a domestic violence incident increases the chance of a homicide by a stunning 500 percent. A 2003 study found that women with a gun at home were nearly three times more likely to be murdered than women without a gun in the home. The deadly correlation existed even when domestic violence wasn't a factor.

Evan DeFillips, writing last year at the Atlantic, pulled together additional research on domestic violence and guns that reveals how rarely women are able to use them in self-defense when threatened with violence:

In another study, published in the American Journal of Public Health, researchers interviewed 417 women across 67 battered women’s shelters. Nearly a third of these women had lived in a household with a firearm. In two-thirds of the homes, their intimate partners had used the gun against them, usually threatening to kill (71.4 percent) them. A very small percentage of these women (7 percent) had used a gun successfully in self-defense, and primarily just to scare the attacking male partner away. Indeed, gun threats in the home against women by their intimate partners appear to be more common across the United States than self-defense uses of guns by women.

Another large case-control study compared women who were murdered by their intimate partner with a control group of battered women. Only 16 percent of the women who had been abused, but not murdered, had guns in their homes, whereas 51 percent of the murder victims did. In fact, not a single study to date has shown that the risk of any crime including burglary, robbery, home invasion, or spousal abuse against a female is decreased through gun ownership. Though there are examples of women using a gun to defend themselves, they are few and far between, and not statistically significant.

And last year, the Senate Judiciary Committee held hearings on a measure that would tighten gun restrictions for domestic abusers in dating relationships and for stalkers. Christy Martin, a boxer and survivor of domestic violence, was among the women who testified in support of the bill. In 2010, Martin was stabbed three times, shot and left for dead in her home by her ex-husband. It was her own gun that was used against her.

“As I lay there, I could hear the gurgling. I knew my lung had been ruptured, but I wasn’t dying fast enough,” Martin said during an interview with MSNBC. “So he came back 30 minutes later and shot me with my own 9mm.”

Snyder's veto is far from a tipping point on guns and domestic violence, since gaping holes in our current patchwork of federal and state law leaves victims vulnerable. But putting the issue back on the table in 2015, at the state and federal level, could be a rare opportunity to advance the kind of reforms that would keep guns out of the hands of abusers at a time when many Americans support such policies. According to a 2014 poll, nearly 70 percent of Republican voters said they would support or strongly support gun restrictions for convicted stalkers. Nearly 60 percent of Republican voters support expanding current protections to include non-married dating partners.

But doing so, as Gabby Giffords wrote last year in support of the measure, “will require our leaders to show some courage and stand up for common-sense laws.” Unfortunately, judging from the GOP's recent track record, courage and common sense may be too much to hope for.