The actor on his new sci-fi film "Vice," why artists have authority problems, and owning firearms 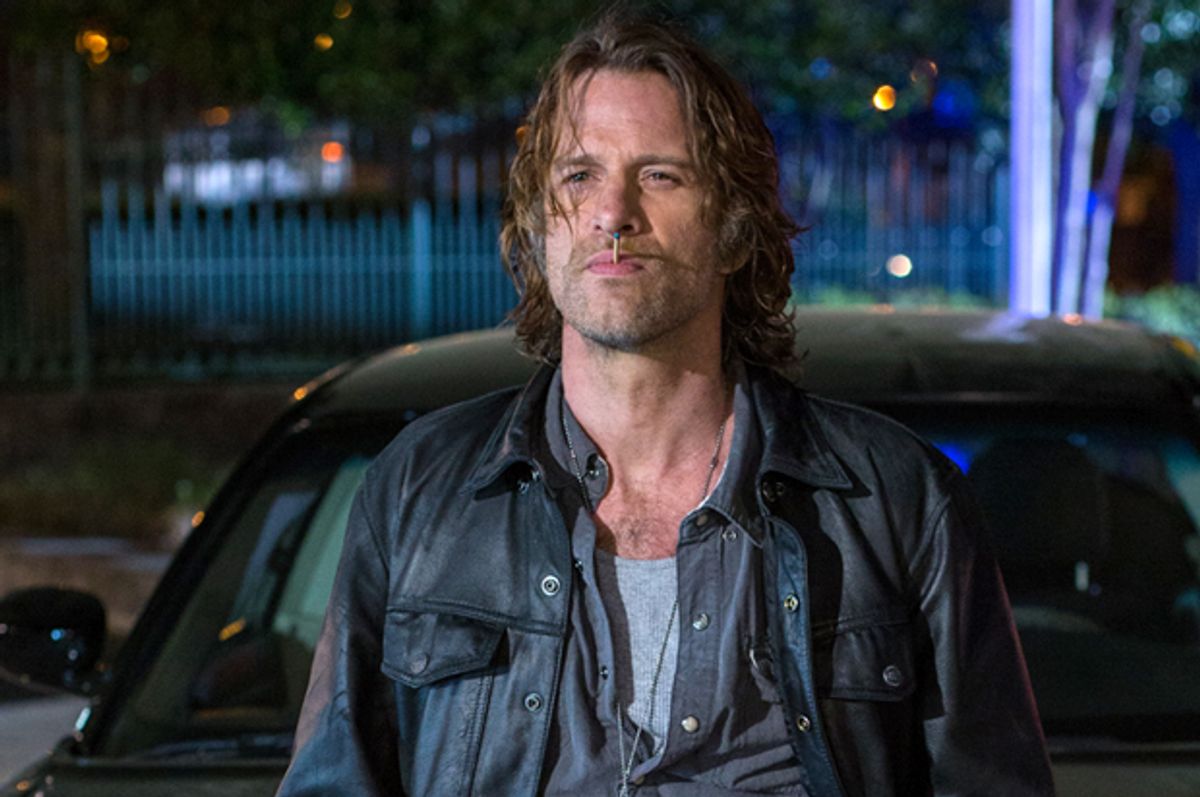 In the atmospheric sci-fi film “Vice,” Thomas Jane is Roy, a law-bound detective pitted against Julian Michaels (Bruce Willis), who runs “VICE"--a place where there are “no laws, no rules, no limits and no consequences.” When an “artificial” named Kelly (Amber Childers) tries to leave VICE for “a better reality,” she enlists the aid of Evan (Bryan Greenberg) to help her stay one step ahead of both Julian and the law. Rebelling against his authoritative captain, and endlessly snarky in his dealings with cops and criminals, Jane plays the film’s hero as a man who feels driven to succeed even if his efforts go underappreciated.

In “Vice” you play a detective, but you have played a cop-turned-criminal before, most notably in “Stander.” And you were the FBI agent turned vigilante in “The Punisher.” What side of the law do you like to be on in films, and why?

I like to be on the side of the right thing to do. It’s not always easy to figure out what that is. Stander started robbing banks because his country [South Africa] was fucking around. I like characters that are trapped in that gray area and have to make a choice. And often the right thing to do is illegal. But it’s all fun. I like guys who cross the line—whatever that line is, whether good to bad or bad to good.

Roy doesn't handle authority so well. How are you with authority?

Yeah, authority issues… the function of being an artist is to fuck with authority. The world is not perfect. The systems—be it capitalism, communism or socialism—are all flawed, fucked up ways of controlling the population. We’ve not figured it out. We’re still working on it. The world economy we have is not sustainable. Every company is based on growing, and the stock market is like Las Vegas, which is fucking ridiculous. The impact that has on the economic status in the world is childish—none of that can last. All forms of rebellion are good and necessary. Nothing is working. It’s all failing fast. We’re living on a finite planet with finite resources.

How did you create the character of Roy?

For a film like “Vice,” I go on instinct. I think: What would be fun to play? Who would I like to be as an alter ego, or someone I would admire? That’s where Roy came from. I kept it loose and improvised. I had fun.

Do you believe in artificial intelligence? What is your take on nature versus nurture?

My character has qualms about technology and what it’s doing to us. It’s a double-edged sword. I think there are great things about technology that have changed our world in the last five years, and 10 years from now things could be really different with artificial intelligence and quantum computers. Serious power will be in the hands of normal people, and the more access each person has, it means that everyone is capable of more damage.

What are your vices? If you had the freedom, as the film says, of “no laws, no limits, no rules and no consequences,” what would you do?

I’ve done well exploring my vices. I’m taking most of my vices as far as I want to go and sometimes too far. But I think that’s part of life, and I think that we should push limits and the boundaries of how we define ourselves. The world is going to create boxes; the more we can stay out of the box and break down walls, the happier and more enlightened and connected we’ll be to the human condition. We’re all in this together. We are each other. Very slowly we’re realizing that in how we conduct ourselves in the world, freeing slaves, allowing women to vote and [marriage] equality.

In “Vice,” Roy carries a gun. Are you comfortable with firearms?

I think everyone is entitled to their own opinions. I like to stay open-minded despite having a different opinion than others. Personally, I love guns. I believe in the right to defend myself from tyrannical governments. I don’t want people breaking into my house. They don’t print the number of lives saved by folks defending themselves with firearms. We need education. There should be mandatory training and firearm safety. That would save lives. I grew up with guns. My dad is a hunter. I got my safety training early in life. Once you respect the power of the weapon, you understand it. Once you understand the tool, it’s hard to imagine people abusing it.

You alternate between leading and supporting roles in A-list projects and B-movies, TV and film. Is this a deliberate career strategy?

I consciously try not to be pigeonholed. That makes me decide what to do. There are advantages to being pigeonholed: people know what they will get, and they build movies around you. I’ve never really been interested in playing one type of person. Like James Cagney; he was a singer and dancer--he was amazing. I have all his gangster stuff. I just try to pick films I can have fun with. It’s rare that a part comes along and you connect to it. Some decisions are based on the fact that I have to pay the rent and have not worked or I don’t want to work for some time. Hopefully I can pick stuff to have fun with. Or I find a part I can bring something to that is something no one else can.