Terrorism can't be blamed on religion alone, but murder and brutality are elemental to almost every major faith 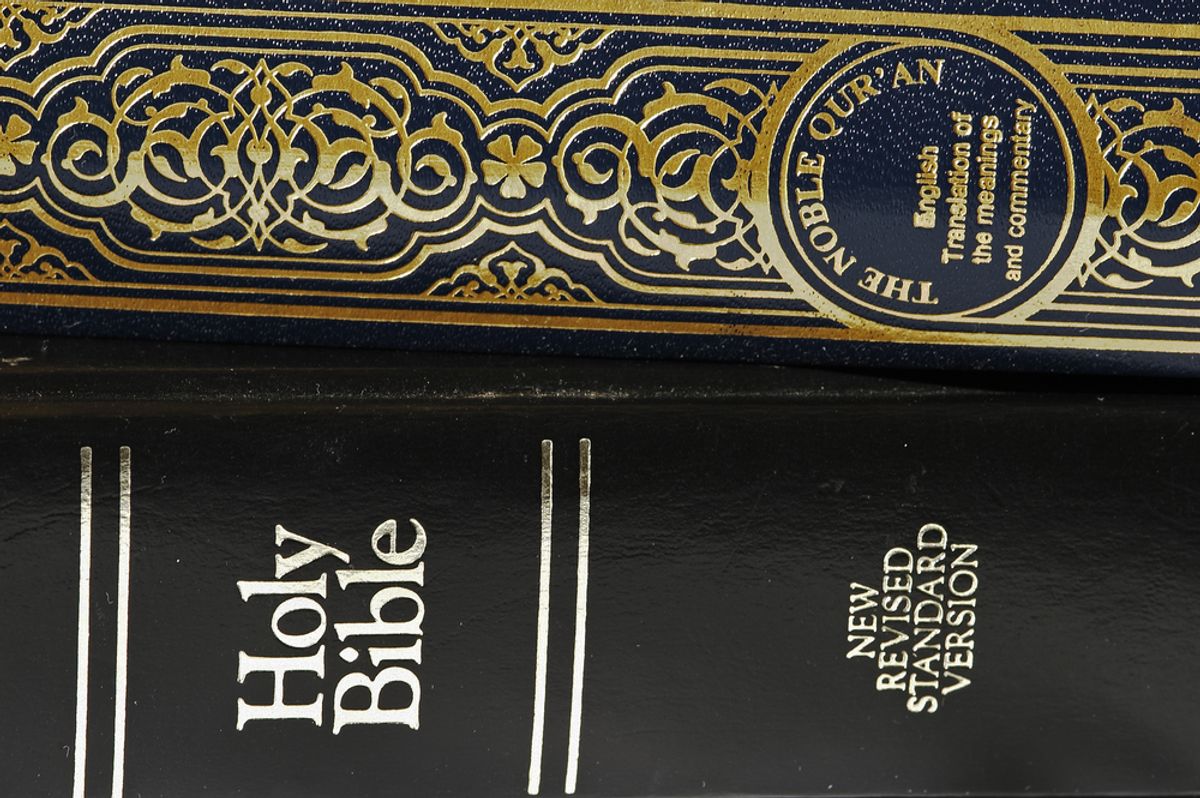 The year 2015 has opened to slaughter in the name of gods.  In Paris, two Islamist brothers executed Charlie Hebdo cartoonists “in defense of the Prophet,” while an associate killed shoppers in a kosher grocery.  In Nigeria, Islamist members of Boko Haram massacred a town to cries of Allahu Akbar—Allah is the greatest!  Simultaneously, the United Nations released a report detailing the “ethnic cleansing” of Muslims in the Central African Republic by Christian militias, sometimes reciting Bible verses. On a more civilized note, Saudi Arabia began inflicting 1000 lashes on a jailed blasphemous blogger—to be doled out over 20 weeks so that he may survive to the end. In media outlets around the world, fierce debate has erupted over who or what is responsible.  Is monotheism inherently violent? Is religion an excuse or cover for other kinds of conflict? Are Western colonialism and warmongering in the root of the problem?  Do blasphemers make themselves targets? Is the very concept of blasphemy a form of coercion or violence that demands resistance?  Is killing in the name of gods a distortion of religion? Alternately, is it the real thing?

Each of these questions is best answered “yes, and” rather than “yes/no.”

With the possible exception of Buddhism, the world’s most powerful religions give wildly contradictory messages about violence.  The Christian Bible is full of exhortations to kindness, compassion, humility, mercy and justice.  It is also full of exhortations to stoning, burning, slavery, torture, and slaughter.  If the Bible were law, most people you know would qualify for the death penalty. The same can be said of the Quran.  The same can be said of the Torah. Believers who claim that Islam or Christianity or Judaism is a religion of peace are speaking a half-truth—and a naive falsehood.

The human inclination toward peacemaking or violence exists on a continuum. Happy, healthy people who are inherently inclined toward peacemaking focus on sacred texts and spiritual practices that encourage peace.  Those who are bitter, angry, fearful or prone to self-righteousness are attracted to texts that sanction violence and teachers who encourage the same. People along the middle of this continuum can be drawn in either direction by charismatic religious leaders who selectively focus on one or the other.

Each person’s individual violence risk is shaped by a host of factors: genetics, early learning, health, culture, social networks, life circumstances, and acute triggers. To blame any act of violence on religion alone is as silly as blaming an act of violence on guns or alcohol. But to deny that religion plays a role is as silly as denying that alcohol and guns play a role.  It is to pretend that religions are inert, that our deepest values and beliefs about reality and morality have no impact on our behavior.

From a psychological standpoint, religions often put a god’s name on impulses that have subconscious, pre-verbal roots. They elicit peak experiences like mystic euphoria, dominance, submission, love and joy. They claim credit for the moral emotions  (e.g. shame, guilt, disgust and empathy) that incline us toward fair play and altruism, and they direct these emotions toward specific persons or activities. In a similar way, religions elicit and channel protective reactions like anger and fear, the emotions most likely to underlie violence.

A case from my own field, mental health, tells the story. On November 5, 2009, Muslim US army psychiatrist, Nidal Malik Hasan, shot and killed thirteen of his fellow soldiers on the Fort Hood military base, injuring another thirty. His case  shows how religion can combine with other ingredients to produce a lethal brew. From the swirl of conjecture and hype emerged the image of a man who was lonely, who couldn’t quite seem to win at love, and who was profoundly troubled by the horror stories brought home by his soldier clients. Do therapists experience vicarious trauma?  Absolutely. Does this trauma put their own mental health at risk?  Absolutely. Many of them deal with this risk by seeking professional consultation, asking for support from loving family and friends, and limiting the number of post-traumatic clients that they see. It appears that Hasan made at least tentative attempts in several of these directions. But primarily he turned to forms of Islam that only deepened his sense of alienation and anger. In what must have been an anguishing conflict of loyalties, piety helped him to resolve the conflict in favor of co-religionists over compatriots. Ultimately, rage won out—righteous, sanctified rage—which came to matter more than any value he as a healer placed on his own life or the lives of his colleagues and clients.

The perpetrators of the Charlie Hebdo massacre grew up in an immigrant ghetto outside of Paris, a place steeped in patriarchy, bravado, and resentment—a  place more prone to foster bitterness than hope.  Any path to assimilation was obstructed by both the racism of outsiders and their own sense of cultural and religious superiority, and they instead spent time in Yemen where they absorbed the jihadist aspirations of Al Qaeda.  Islam, in other words, probably contributed to their inability to merge into French culture and then sanctified and channeled their anger.  But there were many reasons that the jihadi mentality found fertile ground.

I would argue that, like alcohol, religion disinhibits violence rather than causing it, and that it does so only when other factors have created conditions favorable toward aggression. I might also argue that under better circumstances religion disinhibits generosity and compassion, increasing giving and helping behaviors. Religion often is centered around authority and text worship (aka “bibliolatry”). Because of this, it has the power to lower the threshold on any behavior sanctioned by either a sacred text or a trusted religious leader and is at its most powerful when one is echoed by the other.

Despite the fact that violence is repeatedly endorsed in sacred texts, most Christians, Muslims and Jews never commit acts of violence in the service of their religion. Similarly, millions of people consume alcohol without insulting, hitting, kicking, stabbing or shooting anyone. Most of us are peaceful drinkers and peaceful believers. Yet, statistically we know that without alcohol assaults would be less common. So too, we all know that when suicide bombings happen, or blasphemers and apostates are condemned to die, or a rape victim is stoned to death, Islam is likely to be involved. And when we hear that an obstetrics doctor has been shot or a gay teen beaten and left for dead, or a U.S. president has announced a “crusade”, we know that Christianity was likely a part of the mix.

In general, as the gospel writer said, it is far easier to see the mote in our brother’s eye than the log in our own. American culture is bathed in Christianity, and even for most secular Americans, is easy to see Islam’s role in violence while missing the times when Christianity plays the same role. But the rest of the world doesn’t see us through our own rose colored glasses, and under a bare light bulb, American Christianity retains shadows of the inquisitor’s hood and implements of torture.

In recent years, the European and Australian press repeatedly have called attention to horrors being perpetrated in Africa thanks to American missionary dollars, a story that has been slow to get mainstream American press coverage.  As Evangelical and Pentecostal Christianity spread across Nigeria and Congo, thousands of children are being beaten or burned or disfigured with acid after being condemned by Christian ministers as “witches.”   After all, the American missionaries teach that the Bible is the literally perfect word of God, and the Bible says, “Thou shalt not suffer a witch to live” (Exodus 22:18).  When children are condemned by pastors and priests, exposed in the name of Jesus by the Holy Spirit himself, parents abandon them and their villages drive them out.  The lucky ones find refuge in shelters.  (For photos click here.)

Meanwhile in Uganda, American Evangelicals have helped to advance prison terms and death penalties for African gays. The Family, an American Christian organization with members in congress helped to convert Uganda’s president to their form of politicized Christianity. American activists attended a conference in Uganda aimed at “wiping out” homosexuality. Within months, a bill had been introduced that would allow the death penalty for gays with AIDS and institute jail time for parents who fail to turn in their homosexual teens. Unrelated? No. But horrors such as these don’t seem to have abated the flow of salvific dollars, Bibles, and earnest missionaries eager for converts any more than suicide bombings have dried up support for madrassas.

Were the Fort Hood  and Charlie Hebdo murder sprees or Boko Haram massacres caused by Islam? Are the Central African murder sprees caused by Christianity?  A yes answer is far too simple. But violence, tribalism, and mutually exclusive truth claims are built into in our sacred texts and traditions. As a consequence, religion around the world continues to disinhibit lethal violence at a horrendous rate. For us to vilify Muslims or Christians or any group of believers collectively is to engage in the familiar act of cowardice we call scapegoating. It means, ever and always, that we end up sacrificing innocents to appease our own fear, anger and thirst for vengeance. But for us to ignore the complicated role of religion in violence is a different kind of cowardice, one that has been indulged by peace-lovers among the faithful for far too long.