Los Angeles renaissance: Why the rise of street vending reveals a city transformed

L.A. is the only one of America's 10 largest cities where street vending is illegal. But that could be changing. 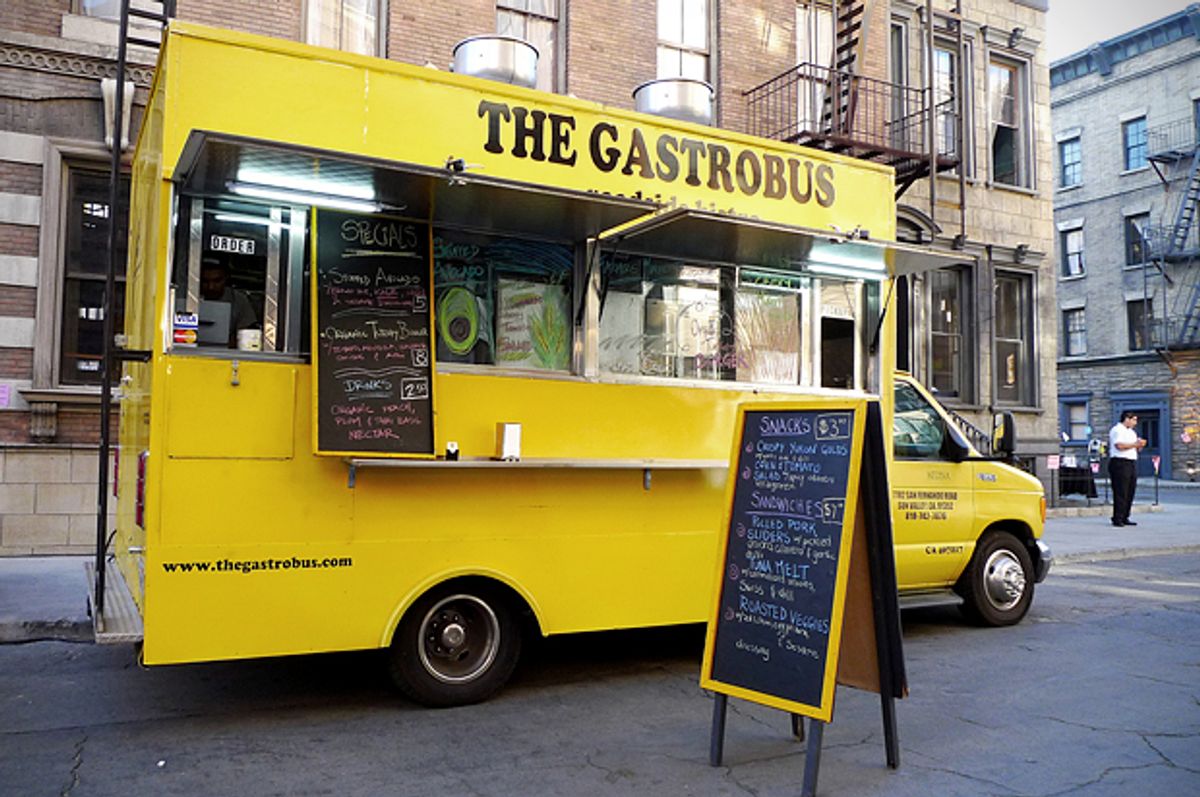 The east edge of MacArthur Park, just down the hill from the flattop skyline of downtown Los Angeles, boasts a pedestrian bustle uncharacteristic of this four-wheeled city. On one corner, in front of a pharmacy, buses discharge passengers every few minutes; halfway down the block, a plaza offers entrance to the L.A. metro, and a man with a battery-powered amplifier plays the electric guitar in the sunshine. It’s busy, and not just by Angeleno standards.

Sidewalk vending is illegal in the City of Los Angeles, but that doesn’t stop an estimated 50,000 Angelenos from setting up shop in the streets. Their highly visible presence on downtown sidewalks, around parks and stadiums, and at bus stops, metro stations, and parking lots is a bold display of civil disobedience. The Los Angeles authorities tolerate vending like New York police allow jaywalking — as a kind of irrepressible and practically harmless urban force — but the practice remains illegal, and hundreds of misdemeanor tickets are issued each year.

Los Angeles is the only one of the nation’s 10 largest cities where street vending is illegal, but that could change this year: Two city councilmen, José Huizar and Curren Price, have been working since November of 2013 to move the nation’s second-largest city toward legalizing street vendors. In May, the city’s chief legislative analyst issued a report recommending that L.A. adopt a comprehensive vending policy. The legislation is currently receiving input from relevant city departments, but a spokesman for Huizar told me they expect it to come back before the council later this year — and to pass.

If the scattered vendor industry can be effectively and fairly regulated, such a law could relieve vendors of harassment from police and extortion from gangs while instilling consumer protections like health inspections. But that’s a big “if.” Not everyone is sure it’s possible.

From city to city, battle lines over street vending iterate with predictable certainty. “On one side are the vendors, their loyal customers, and those who are interested in the welfare of recent immigrants or the marginally employed,” writes Regina Austin, a law professor at the University of Pennsylvania. “On the other side are city authorities concerned about congestion, sanitation, aesthetics, and property values; fixed-location merchants, who must compete with vendors whose only overhead condition is the weather; producers and distributors, who want to know how their goods wind up on vendors’ tables; and middle-class residents who prefer streets marked by order and decorum, rather than by the chaos and confusion of Old World bazaars."

In Los Angeles, many property owners and brick-and-mortar businesses remain opposed to legalization. They’re skeptical the city is capable of regulating existing vendors, let alone handling whoever else is emboldened by the withdrawal of police pressure. This conflict is most evident around resurgent Downtown L.A., where street vendors have long thrived but storefront urbanism has recently returned.

The city’s first attempt to bring street vending under the law occurred in 1994, when L.A. moved to allow eight designated vending areas, imposing its own geographic limits on the practice. But only one zone was established, and none remains today. The process of zone creation, a city report found, is far too cumbersome. (The idea strongly resembled a 1993 effort in Mexico City, which attempted to coerce vendors into 38 newly established markets. Only two remain popular today.)

Such policies reflected the contemporary attitude that vending is a manifestation of disorder, a bellwether of societal corrosion. Virtually every American city, in a concession to landed interests and anxious bureaucrats, had made some effort to restrict the practice. In New York, the squeegee men — who washed windshields at red lights — were a high-profile target of Mayor Rudy Giuliani's ’90s law-and-order strategy. Advocates of broken-windows policing often saw street vending as the first crack in the glass.

People selling things on the sidewalk is not, of course, a chiefly American problem. Municipal authorities spar with vendors from Algiers to La Paz. In 2002, shortly after leaving office in New York, Giuliani was hired by Mexico City to rid the historic center of vendors. There, it’s estimated that more than 500,000 people sell goods off the books. Many are members of large associations that mediate conflicts, handle bureaucratic interference and control access to popular locations. Further afield, in India, 2 percent of the urban population engages in street vending. That’s one in 50 urbanites, or 10 million street vendors nationwide.

If the political tide has turned in favor of vendors, it’s largely for two reasons. The first is a global shift in how cities deal with the “informal economy,” the collection of housing, transportation and business dealings that occur without official documentation. All this was once known as the “black market,” and experts once believed it ought to be regulated and controlled if not eradicated entirely.

More recently, a softer approach has gained traction. Urban scholars today see in informal activity a valuable counterpoint to traditionally prescriptive urban management. They think the informal can be incorporated into city policy even if not, in some cases, directly imitated. Unregulated bus networks show the deficits in the official transportation system; informal settlements, or slums, offer architects and urbanists a dose of real-world evidence.

Secondly, street vendors in Los Angeles represent the city’s gradual embrace of pedestrianism. Street vending in L.A. took off with the surge in Latin American immigrants in the 1980s, a reflection of the traditions, poverty and resourcefulness of those communities. But mobile commerce also emerged to meet Latino immigrants’ new movement patterns: Latinos constitute the majority of L.A. bus riders and have a significantly lower rate of car ownership than the general population.

It’s no coincidence that Westlake-Pico Union, the area around MacArthur Park, is one of the city’s most car-poor neighborhoods. The neighborhood is 85 percent Latino and 66 foreign-born, with most migrants coming from Mexico and El Salvador. Nearly three in four driving-age residents here have no vehicle; in L.A. County at large, the figure is closer to one in six. Two in five households in the 90057 zip code, adjacent to the park, don’t have a car.

“In an automobile-dominated environment devoid of much street life,” writes Fazila Bhimji, in an essay on female vendors in L.A., "the Latina street vendors and the food trucks lend vibrancy to the quiet parks, street corners, and strip malls, such that people stop to eat, chat, and line up as they wait for their favorite taco or tamale or raspada.” (Contrary to critics’ claims, Bhimji writes that vendors tend to be fastidious in cleaning and caring for their patches of sidewalk — it’s not good for business to have birds pecking at scraps by the curb.)

But even if the city improves on its Clinton-era effort to relegate street vending, formidable challenges remain. If the practice is made legal in Los Angeles, says Matt Geller, the CEO of the Southern California Mobile Food Vendors Association, most street food will still violate state health laws. Unless a vendor is selling hot dogs or tamales, Geller told me, he or she must have access to water. That requirement makes it nearly impossible to sell food without a truck on the right side of the law.