Bisexuals are more visible than ever, yet the harmful stereotypes persist. Heterosexism only tells half the story 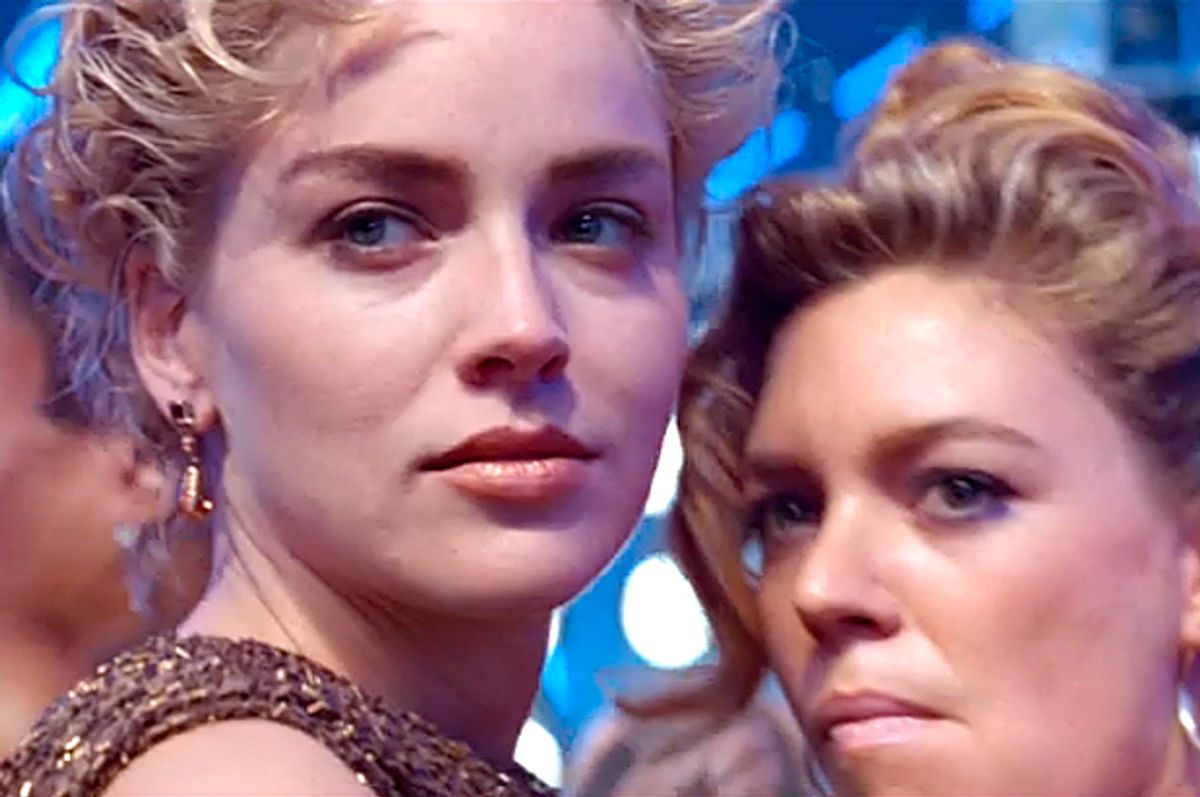 In the new film Appropriate Behavior, bisexual protagonist Shirin—played by writer/director Desiree Akhavan—has a conversation with her brother about her romantic life that goes like this:

“Maxine and I were in a relationship.”

“I was pretty into all the guys I was with so I think I’m bisexual.”

Yes, it’s a thing; but it’s also many different things. In the film, Shirin’s brother goes on to ask whether she needs to come out to her parents, now that her lesbian relationship is over. But his fictional ignorance reflects so much real-life ignorance. Last year, in Slate’s Dear Prudence column, Emily Yoffe advised a bisexual woman in a monogamous marriage to a man against disclosing her sexual orientation—apparently bisexuality should only be made public when it’s being “acted on”—in bed.

When True Blood star Anna Paquin told Larry King last year that she was marrying a man, he asked, “Are you a non-practicing bisexual?” That question—whether bisexuality exists—along with its partner in ignorance—the insistence that bisexuality can only mean actively sleeping with men and women simultaneously, or at least, trying to—are things bisexual women confront on a regular basis.

While bisexuals are gaining political ground and visibility—Congress has its first openly bisexual member, Representative Kyrsten Sinema (AZ), and in 2013, there was a White House roundtable on bisexuality—not everyone gets it. The dangerous, false assumption about bisexuality being strictly about both-sexes-in-bed is used in former Arkansas Governor Mike Huckabee’s book God, Guns, Grits and Gravy to argue against same-sex marriage. “Shouldn't a bisexual be able to have both a male and female spouse?,” he asked. (Really.) It’s the stereotype that apparently will not die. This may sound like it’s about semantics, but for many women, the myths around bisexuality have an impact on how their lives and relationships play out.

More from DAME: "To Fend Off Love With Anyone, Do This"

Dorianne Emmerton, 36, who’s been out as bisexual for half her life, says the most pernicious misconception about bi women is “that we don’t exist. It used to be that we were some sort of traitor to sisterhood if we considered the idea of dick, but now I see that on the same invisibilization spectrum. When women think that, it’s because they expect that we will end up with a man, because no one is really bi; we’re just straight girls experimenting, especially just to attract the attention of men.” This lack of visibility not only makes it hard for non-bisexuals (a.k.a. monosexuals) to understand bisexuality, but for bisexuals themselves to come to terms with their sexuality. As Advocate.com managing editor Michelle Garcia writes about her initial aversion to coming out as bi, “I believed that bisexuality was only a stepping stone to being a lesbian or just a phase or something girls said to get attention.”

The three women I interviewed for this piece all cited bisexuality as an issue in the dating world, from men as well as women. According to Emmerton, “The fact that most bi women end up with men is because lesbians flat-out refuse to date us because they don’t believe we are in it for real. It’s a self-fulfilling stereotype.”

While finding a partner can be challenging for bisexual women, once they’re in relationships, there’s pressure to play down their bi-ness in order to be taken seriously as a partner. As Emmerton told me, “Once I was dating a lesbian, and I thought I was in love and it was forever and we were monogamous, so I let most people think I was a lesbian. I regretted it because I had denied a part of myself. I had even stopped myself from mentioning when I thought a guy was hot because I didn't want to make her nervous that I would leave her for a guy.”

That same fear cropped up in a past relationship of writer and bisexual activist Amy Andre, 40, who’s been out as bi since her teens. “I dated a lesbian who seemed constantly afraid I would cheat on her with a man and/or leave her for a man. Ironically, she’s the one who stepped out on me. At the time (before the cheating), I dealt with it by trying to patiently explain to her what bisexuality was about, but she didn't seem open to hearing my message. These days I have much less patience and would end a relationship at the first sign of that kind of biphobia.”

More from DAME: "Is Hawking Brilliance Better Than Selling Beauty?"

In her essay collection Bad Dyke, writer Allison Moon, 33, describes her evolution from “greedy bisexual” in college to dyke and now, queer. As Moon describes it, “Many of the urban lesbian communities I moved in discriminated against bisexual women. I heard lesbians call bisexuals ‘cocksuckers’ and act as though bisexuals were just straight girls on spring break. So I decided to come out as a lesbian. It was easier because it opened up more doors to community and relationship. At times I did feel like I had to suppress any interest I had in men and I would avoid telling stories that involved past male lovers, which I hated. But since the only two options for women like me at the time were ‘lesbian’ and ‘bisexual’, choosing lesbian was a better, if not perfect, fit.”

Moon, who’s in a long-term polyamorous relationship with a queer cis man, says that the anti-bi bias she encountered early on has largely diminished. Why the change? “As more identities have become available to women-loving-women (like queer, pan, and ‘byke’) I’ve seen that kind of discrimination mellow out. Lesbian is now an identity people can choose into powerfully instead of being the default identity for women who prefer women, allowing for more nuance and acceptance across the queer lady spectrum.”

As a bi woman, part of me can’t believe this is still an issue in 2015. I usually roll my eyes when I see a headline questioning whether bisexuality exists, because the quest to “prove” that it does seems like it’s reinventing the wheel. Another part of me, though, understands that it can be confusing for people of any background or sexuality who are used to thinking of sexual orientation and gender as either/or options to be faced with the fact that there’s more variety to it. For some people, “bisexual” is a perfect fit, but for many, it’s an imperfect placeholder for an identity they are still working out.

I like what my friend, comedian Mindy Raf, posted in a Bisexual Q&A on her Tumblr: “When I told my family I had a girlfriend after years of having boyfriends, I used the word, ‘open.’ Of course they were confused. ‘You know me, I’m just an open person. I like people. I’m open.’ Bisexual seemed so specific, so label-y.” Similarly, Women author Chloe Caldwell told Buzzfeed, “I still don’t know how to label myself and I’m still really confused about it. I feel embarrassed saying that. Part of me wants to have a label so bad because I’m actually also confused without them, but I’m still terrified by them,” before concluding that she’s “Okay with bisexual.”

More from DAME: "Five Awful Things Congress Will Likely Do to Women This Year"

“People who are bisexual in experience often fiercely disavow the ‘bisexual’ label,” says Julia Serano, a bisexual transsexual writer. “For instance, many prefer the labels queer, pansexual, omnisexual, polysexual, multisexual, or even no label at all, over the term bisexual.”

The bottom line is there’s no one “right” way to be or act or love or be out as bisexual. Andre says, “One of the best things a woman can do, if it is safe for her to do so, is to come out and be out, to be a role model for others and show them that bisexuality exists and is valid and something to be celebrated.” Of course, in doing so, you may be taking a risk, because you will almost certainly find yourself contending with other people’s ignorance, their confusion, and the assumptions they make about what your sexuality means, because of the way people have been socialized—both by the mainstream straight world and the queer world—to regard bisexuality. As Kate Conway wrote at xoJane, “Most bisexual people I know are constantly being forced to evaluate their sexualities for the sake of other people’s comfort. People ask me all the time whether, if I had to choose, I would pick being attracted to men or women.”

It’s ironic to me that this, my debut sex column, has been less about sex, and more about labels, yet it also makes sense. Labels can help us form community and learn about ourselves, but when they come with so much baggage attached, they can also confuse us and, instead of being liberating, they can feel constricting, especially if we feel we have to hold ourselves up as an example of “what a bisexual person should look like.” I was reminded of this especially by this anecdote of Emmerton’s:

“I had a really terrible time in university when I was dating a straight guy but had these desires to sleep with all the people, in all the ways, all the time. Part of me thought I was a terrible slut who could never be loved, the other part thought I was just having some trouble dealing with being bi, but I could not, at the time, reconcile myself to living the stereotype of being bi and poly. I did not want to be the person pointed to when someone said ‘look, you can’t be bi and monogamous, it’s impossible.’”

To me, this is where labels can backfire; in trying to make ourselves “look good”—which is, frankly, a lose-lose situation because there will always be someone out there judging your sexual decision-making—we give in to the haters, and thereby give them power over us.