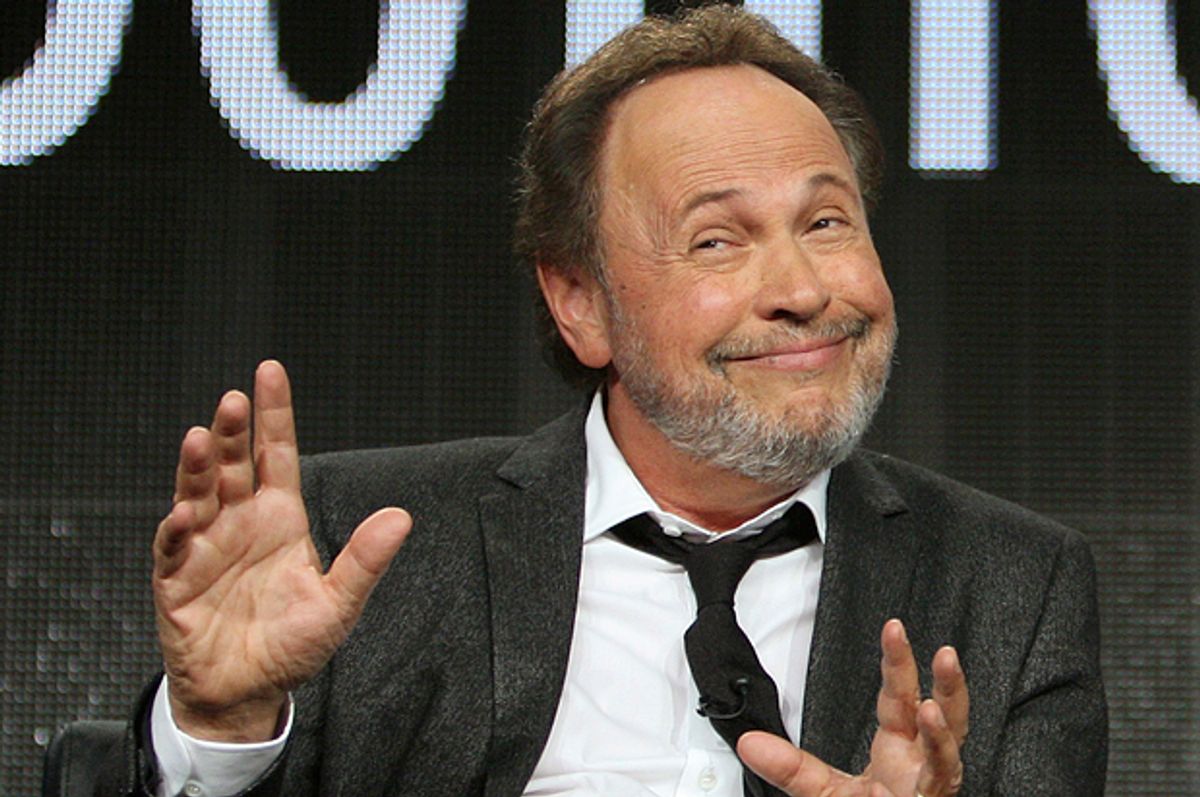 Billy Crystal says he didn’t mean to only condemn gay sex on TV during a Television Critics Association winter press tour panel on Sunday promoting his new FX show “The Comedians.” While fielding a question about groundbreaking portrayals of gay men, Crystal bemoaned how relaxed attitudes have become about gay sex on TV since his tenure playing one of the first unambiguously gay characters, Jodie Dallas on the sitcom “Soap,” from 1977-1981. He said, “I just hope people don’t abuse it and shove it in our face.” He caught fire over the weekend for his remarks, which he now says weren't targeted solely at depictions of gay sex.

The “Monsters, Inc.” star told The Hollywood Reporter in a follow-up statement that what he really meant “was that whenever sex or graphic nudity of any kind (gay or straight) is gratuitous to the plot or story it becomes a little too much for my taste.” That may very well be true—Crystal wouldn't be the first 66-year-old to complain about nudity on-screen—but he made the comment while discussing portrayals of gay characters on television, so the context does matter.

At first blush, it seemed odd that an actor whose groundbreaking work re-defined mainstream audiences’ expectations about gay characters onscreen would be so squeamish about the fruits of his early labor. After all, gay characters now enjoy a range of portrayals on network TV, from sitcom parents Mitchell and Cameron on ABC’s “Modern Family” to shrewdly-promiscuous law student Connor on “How To Get Away With Murder,” and Crystal should be proud of how his portrayal of Jodie Dallas helped pave the way. But a closer look at a transcript of that portion of the panel, published by The Hollywood Reporter, reveals more details about the context of Crystal’s remarks.

First, Crystal acknowledged that he knows he sounds like a granddad complaining (“these kinds of questions leads me into sounding like some former baseball player bemoaning the fact of ‘I only get paid $25,000 my entire career.’”), and he does. Grousing that “sometimes it’s just pushed a little too far for my tastes,” is a bit like the elder statesman on-set complaining that kids these days don’t know how hard it was for him and his on-screen boyfriend (played by Olympic gold medalist Bob Seagren) to play their love scenes “with some sort of courage” in front of a live studio audience.

“There were times where I would say to Bob, ‘I love you,’ and the audience would laugh nervously—because, you know, it’s a long time ago—that I’d feel this anger,” Crystal said. “I wanted to stop the tape and go, ‘What is your problem?’ Because it made you, sort of, very self-conscious about what we were trying to do then.”

“And now it’s just, I see it and I just hope people don’t abuse it and shove it in our face—well, that sounds terrible [laughter]—to the point of it just feels like an everyday kind of thing,” he said.

It’s a classic generational grumble to be less than sympathetic to contemporary struggles—the hurdles might not just seem different from the ones previous generations cleared, they look smaller, less important. It's true that it's become acceptable for sex scenes across the board to be more explicit than they used to be, but it's also true that TV has become more interesting and artistically groundbreaking as the types of stories we see evolve. A family sitcom like "Modern Family" isn't going to push the sex-and-nudity envelope like an HBO series might, so there's plenty of room on the dial to self-segregate by sensibility in that category.  In some ways, Crystal's complaint is the sex-scene version of claiming he walked barefoot, ten miles to school in the snow, up-hill both ways, so why do you want $200 sneakers again? Shouldn't a kiss and a romantic embrace—fade to black—be enough?

Sure, maybe it’s difficult for Crystal to see a passionate, unapologetic sex scene between two men on primetime TV—like, for example, Jeff Perry's Cyrus Beene and Matthew Del Negro's Michael on “Scandal”—and not feel some twinge of sentimentality over how taboo it once was to witness a tender on-screen “I love you” between two men. It’s possible he feels like a very important chapter in his career and in his artistic development is now a quaint footnote.

But frank gay sex scenes don’t diminish the dignity and the power of Crystal's careful, pioneering work. Once a prejudicial barrier is down, if we’re lucky, it stays down. Events that were once considered special and note-worthy can be taken for granted, especially if we can still acknowledge those who broke the barriers in the first place. That gay sex on TV has become “an everyday thing” is something to celebrate, not bemoan.

And indeed, as a straight man, Crystal has the luxury to be sentimental about his vintage work. He can be precious about depictions of today's "gratuitous" nudity and sex because he enjoys the vantage point of the majority—television doesn’t play a major role in how his sex life or romantic relationships are perceived by mainstream America. For audiences still fighting to see their lives reflected accurately and roundly on-screen, being portrayed as fully human sexual beings is important. Crystal could acknowledge that there's still work to be done, even if it's no longer his ground to break.