I'm a public defender who has to challenge illegal police action. Here's the new SCOTUS ruling that made it harder 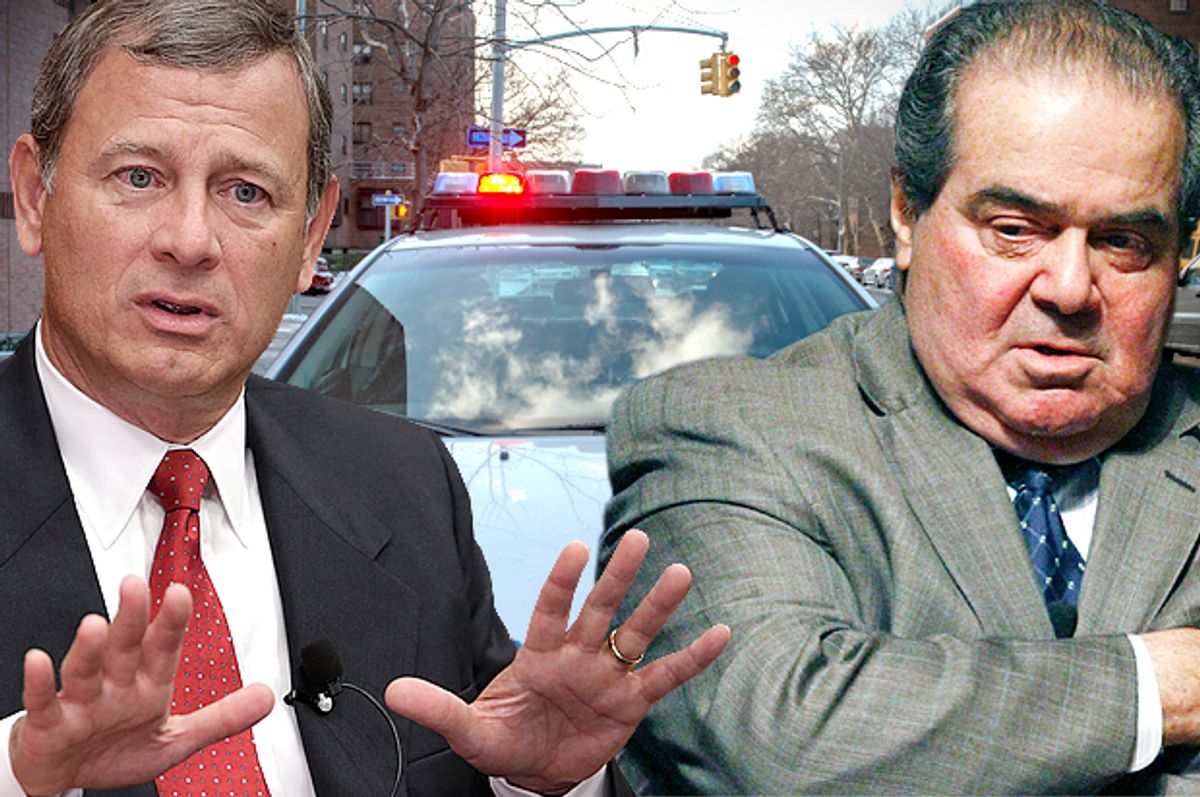 In December, in the midst of nationwide protests drawing attention to the broken relationship between the police and communities of color, the Supreme Court demonstrated an impressive disconnect with reality. It issued a decision in Heien v. North Carolina that tears at the fragile police-minority relationship, and will further erode confidence in government and law enforcement. And it came at just the time when the country needed to heal.

In Heien, a police officer pulled over a man for not having more than one functioning brake light when it turns out the law only requires one. The man then consented to a search and was found to be in possession of cocaine. The Supreme Court said the detention, which requires reasonable suspicion of criminal activity, did not violate the Fourth Amendment because the officer's mistake was a reasonable mistake of law. Somehow, thinking that you need more than one functioning brake light when the law requires only one functioning brake light is reasonable, and therefore excusable if you are a police officer.  This decision shows how poorly the Court understands the daily interactions of citizens and the police. The Supreme Court seems to still think that the police use the vehicle code solely to keep the roads safe.

They don't. They also use the vehicle code to prey on poor people.

As a public defender in Oakland, my office represents about 85 percent of all people arrested and charged with a crime in our county.  We only represent people whose financial means put them at or below the poverty line.  The most powerful tool we have – and anyone has – to fight against illegal action by the police is to challenge it in court.  The Supreme Court provides the strongest possible remedy to unconstitutional police action. The remedy is to suppress the evidence that was seized illegally – to throw out the fruit of the police officer’s illegal labor.

Many of our cases begin with a car stop.  Having handled hundreds of cases that start when people are pulled over in cars, I’ve drawn some immediately obvious conclusions.  The routine, everyday application of the vehicle code regularly ensnares poor people going about their lives. This is true for a couple of reasons. First, poor people have a harder time buying decent cars and paying to maintain them. My clients often drive a car they’ve just bought from a friend, had for a couple of days, or are borrowing for the afternoon.

The California Vehicle Code, like others, is jam-packed with antiquated and convoluted laws.  A large number of these laws only apply to poor people. For example, many penalize characteristics of older, poorly maintained cars. There may be a technically neutral reason for enacting these laws – public safety, no doubt – but the effect of the laws is detention, seizure and oftentimes the search of a poor person. These are the police interactions that define the relationships in poor communities between the police and everyone else.

The technical requirements of the vehicle code -- especially those that govern the physical requirements of a car, its lights, its plates, the sticker on the plates, its windows -- for a poor person, essentially ensures that any time, day or night, a police officer likely has a reason to stop them.  Add to that the fact that the Supreme Court has held that pretextual stops are OK -- a stop based on the color of your skin, the type of car you drive, a rumor the officer heard about you -- as long as there is also a vehicle code violation observed by the officer (see Whren v. U.S. [517 U.S. 806 (1996)]).  Given Whren, abiding by the vehicle code is a poor person of color's only protection against police harassment.

Until now. In California, like many other states, it is unlawful to drive with a cracked windshield. This type of law provides a good example of why the Supreme Court got it so wrong in Heien. First, there are some basic economics at play. Cracks in windshields are expensive to fix. Windshield replacement can cost several hundreds of dollars and the quick fixes offered in parking lots of auto parts stores often leave the car owner with a crack that still exists but is filled with an injected hard plastic. California Vehicle Code § 26710 says it is unlawful to drive a car with a windshield “in such a defective condition as to impair the driver's vision.”

We see these stops all the time, and there’s always a basic factual dispute.  The officer says the crack was so bad it would impair the driver’s vision.  The client says the crack was small enough that it did not impair his vision. When we challenge stops like these, judges usually defer to the officer – what would a reasonable officer have been able to see of the windshield and its condition from his perspective before he initiated the car stop?  Even when we determine the crack is small and not a serious impairment of the driver’s vision, and even if we were able to prove that the officer was just using the crack as an excuse because he wanted to detain our client for some other pretextual reason, before Heien, judges would typically deny a motion challenging the stop based on the officer’s testimony.

Heien adds another, very dangerous layer of analysis. Now, for those small percentage of cases where the crack is so small, when the judge just can’t bring himself to take the officer’s side because no objectively reasonable officer could possibly believe that a crack that small could impair the driver’s vision – in that small number of cases, the officer and the district attorney have a new argument:  the officer did not understand the law. This is moving the goal posts.

You see, in those cases where the judge sides with the officer, and the crack is of a reasonably large size, the client leaves the courtroom befuddled, but the Constitution remains intact. He asks himself, “Why is it that when I say my vision was not impaired, a police officer can still stop me for a crack the officer says impairs my vision?”  Now, take the case where the crack is so small that no one could reasonably say it impaired the driver’s vision.  When the client leaves the courtroom in that case, he’s furious.  And for good reason.  He’s furious because the Constitution, the holiest of laws and the last protection for the most vulnerable members of society – has been crumpled up and thrown out the window.  For this client, and for those in the community in which he lives, it feels like the law does not apply to the police.  That they are judged by a different standard.  It erodes the confidence the community has in the police.

There are lots of examples like this.  Recently we’ve seen clients pulled over for not having mud flaps on their cars with big wheels and tires.  Granted, CVC 27600 says that the fender of the car or a mud flap must be as wide as the tread of the tire “to effectively minimize the spray or splash of water or mud to the rear of the vehicle.”  But on a clear, warm summer day in Oakland, when there is no rain or mud on the city streets and a black man is driving a mid-'90s Chevy Caprice with oversize rims, a car stop for no mud flaps just feels pretextual.  It doesn’t feel as if the officer is trying to protect other vehicles from a big splash.  When a client gets arrested for something resulting from a car stop like that, he expects that a judge won’t buy the officer’s mud flap story.  He expects that the officer will be held accountable.  More often that not, a judge will side with the officer, citing the vehicle code’s requirement.

In those cases, the client, again, leaves the courtroom frustrated and the constitution endures another bout of forced erosion.  What will happen now, in those small percentage of cases when the tire tread is not outside the fender and CVC 27600 clearly doesn’t apply?  I have no doubt that the officer and the district attorney will now rely on Heien.

They will argue that even if the officer got the law wrong, the car stop should stand because the mistake was reasonable.  This erodes confidence in the system and in government and for people who live at the margins of society – who haven’t seen their boats lifted with the stock market and who haven’t realized massive financial gains from their real estate holdings. What we need is a Supreme Court that will give these communities more reasons to hold up their end of the social contract – not fewer.

Seth Morris has been a deputy public defender in Alameda County, California since 2008.