It's not a coincidence that American Apparel is gluing pubes on its mannequins. Bare is out, and hair is in 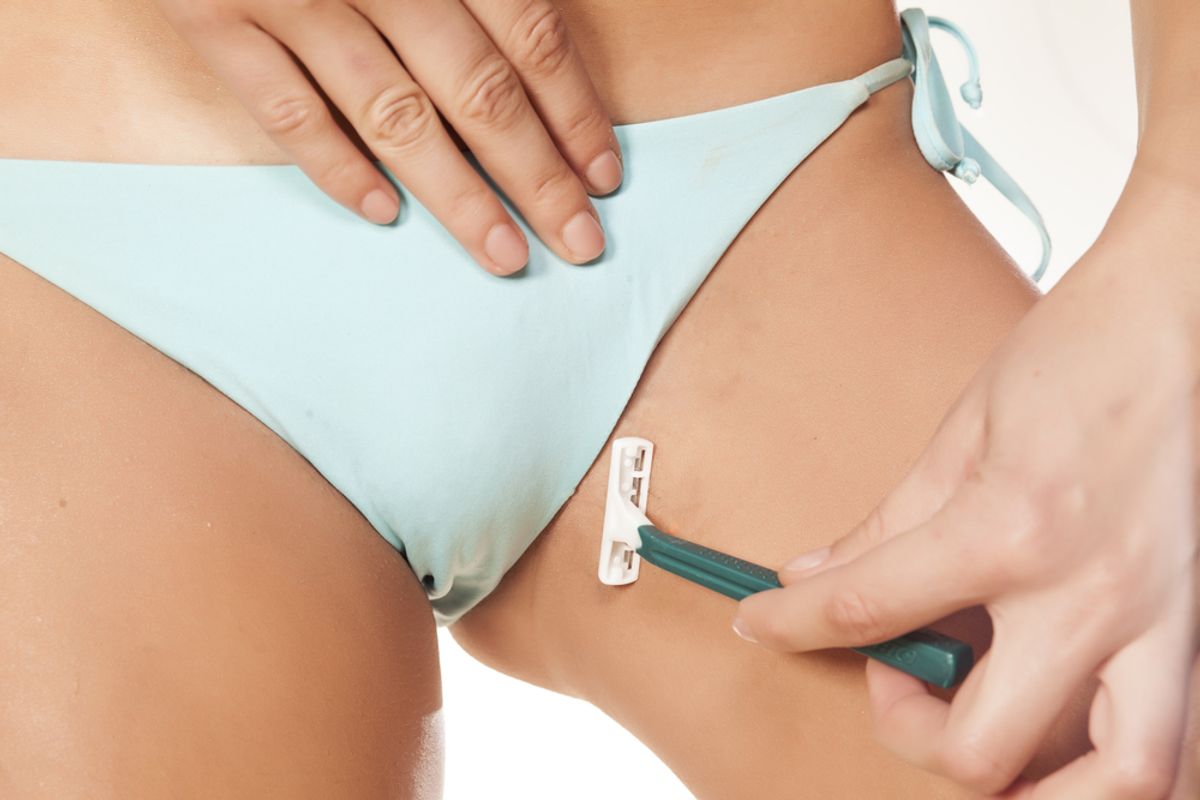 If you've been able to shop around sexually in the past few years, you may have noticed how arbitrary pubic hair trends seem to be. When they’re in, they’re everywhere, and when they change, it feels like the memo must have been sent out to women worldwide. While we know that last bit isn’t true, it speaks to how fast word spreads about an otherwise under discussed topic. Now that we’ve hit 2015, one truth seems to be settling in: the bush is back. Kind of.

The “full-bush Brazilian” is a new term when it comes to pubic hair trends, and it’s unique in the fact that, by definition, it’s a complete oxymoron. Even groups of prepubescent, pimple-ridden boys can tell you about the “all bare” aesthetic Brazilian bikini waxes deliver, though it might be hard to get the details through all the giggles. But now that a new term has been added to the phrase, we’ve got to ask… what does that actually mean?

In sum, it means women now want their cake and to eat it too. The full-bush Brazilian involves removing all hair from the labia and butt crack while leaving the top untouched. It allows ladies to sport the “all natural” look while indulging in the grooming routines hard-core-hippies have long rejected. But that’s the essence of “hipsterism,” right? Looking the part without necessarily living the life?

New York Magazine quotes bikini-waxer Jola Borzdynski in saying the full-bush Brazilian is for “Hippies with porny sex lives.” Which is to say, hippie guys who like to go down on their girls, and hippie girls who like to be licked. Just as long as they have a nice clean canvas to work with. Apparently a mouth full of pubes still isn’t in style.

Some women maintain that being hairless “down there” makes sex better, both oral and penetrative. Even Eva Longoria once said, “Every woman should try a Brazilian wax once. The sex they have afterward will make them keep coming back.” And a lot guys, especially ones who aren’t big on cunnilinguis to begin with, are much more comfortable with the idea of going down on their partner when not confronted with a big bushy barrier.

We probably should have seen this coming. I mean, if American Apparel is putting pubes on their mannequins, why shouldn’t we expect the customers to start growing them as well? But if a giant clothing retailer can’t influence women in this arena, those from the Hollywood elite probably can. Actress Cameron Diaz titled one of the chapters of her health and fitness book “In Praise Of Pubes.” There, she discusses the lengths some women go to rid themselves of pubic hair, writing, "Personally, I think permanent laser hair removal sounds like a crazy idea. Forever? I know you may think you'll be wearing the same style of shoes forever and the same style of jeans forever, but you won't. The idea that vaginas are preferable in a hairless state is a pretty recent phenomenon, and all fads change, people."

And let’s not forget about Madonna, either, who has been on the pro-body-hair-bandwagon for decades now. Just last-year, the 56-year-old Instagrammed a photo of herself sporting hairy armpits. Granted, that’s a leap from pubic hair (my guess is that armpits still get a lot more razor action that pussies do), it still helps prove a point.

But there’s one demographic who isn’t speaking up when it comes to bringing the bush back. They’re the little sisters, the college grads, the 22-year-olds who are certainly familiar with sex, but maybe not with having it while unkempt. And given the timeline, it makes a lot of sense.

Back in 1987, seven Brazilian sisters introduced the American public to the Brazilian bikini wax at their Manhattan salon. The style had three solid years to catch on before the ‘90s hit – a decade marked by excessive pruning and trimming. For those born during these years, a bare undercarriage seemed commonplace.

One young woman I spoke with told me, “It’s too much upkeep – keeping a perfectly trimmed bush. And it’s uncomfortable growing back.” She insisted she simply “didn’t like the look.” That she felt too “detached” from the style, which begs the question, does an affinity for bush come with age? Are those of us sporting this almost-all-natural look stepping in to another phase of our sexual maturity? Or are we just getting lazier? Maybe we’ve just gotten so used to our own pubes that the sight isn’t really shocking anymore.

Another obvious point: the older you get, the more likely you are to enter into a serious relationship. It’s almost a certainty that the first time you get together with a guy, you’ll be fully groomed. Shaved legs, and shaved everything else. But fast-forward a few months. If that guy is still around, maybe even sleeping in your bed, it’s safe to say he’s experienced your furrier side.

Then again, maybe these modern developments aren’t exactly unique to a modern public. The ancient Egyptians used to remove all pubic hair with crude razors made of flint and bronze. The Romans obliterated their bushes with a special tweezer called the “volsella.” The original Nair came in the form of creams filled with resin, goat’s gall, bat’s blood and powdered viper. Trends have always been evolving. And when they transition, people have long made it a note to be on board. When the bush fell back into fashion, prostitutes took to wearing pubic hair wigs called “Merkins” to replace the hair they had to shave to prevent crabs or cover up STDs. It’s possible we’re just carving out another chapter in pubic hair history. Let’s wait to see what 2016 brings.