Bye-bye, Reagan conservatism: Why Obama's speech was more significant than it seems 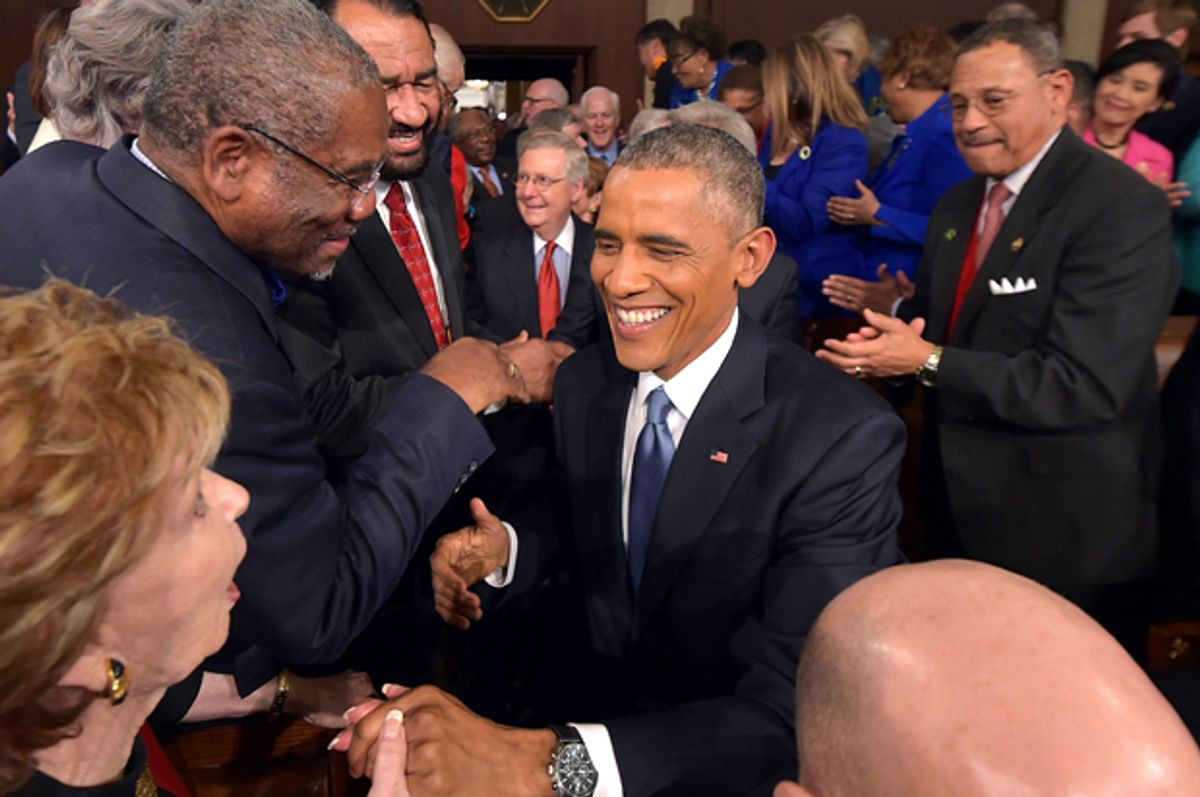 In advance of the president’s big address on Tuesday night, a bored and restless pundit class began to convince itself that Obama’s final State of the Union as the unquestioned chief of his party would really be about the next presidential campaign — and, more specifically, “boxing in” his increasingly likely successor as the Dem nominee, Hillary Rodham Clinton. At the time, this struck me as an odd prediction, and one that said more about pundits than Obama. The president is not without his shortcomings, of course. But when it comes to understanding his actions, an overzealous focus on the short term has only rarely been at play.

As was clear to everyone who watched Obama’s performance on Tuesday, or has read it online in the hours since, the president instead took quite the opposite approach. Rather than concern himself with the tactical minutiae of a race with no official top-tier candidates, and which is still nearly two years away, Obama spent the vast majority of his penultimate State of the Union making the kind of argument you usually expect to hear from a departing president: cataloging his victories and needling his critics. And to a significant degree, as I argued in my State of the Union preview, that was because the country he inherited after eight years of George W. Bush was in such rotten shape that Obama had little time to do more than stave off the next crisis.

But as much as the president’s address was characterized by a growing economy finally giving him a chance to say what he’d like to do with the fruits of his labor, the synoptic nature of the speech was also a consequence of Obama’s well-known preference for thinking about the “long game.” For the first time in more than six years, he had an opportunity to boast of changing the “trajectory” of the country like few presidents before him and none since Ronald Reagan. Crucially, he could do so while pointing to benefits that were tangible in the here and now, rather than being likely to occur in the indeterminate future, as has often been the case. He seized the opportunity, and made his case for what it would mean to be a citizen in the United States that Barack Obama helped make.

It sounds, I know, remarkably ambitious — even hubristic. Still, it’s a goal Obama’s never been particularly hesitant to share, despite the fact that his moderate demeanor and often self-consciously centrist policies don’t fit our expectations for how a guy trying to “fundamentally transform” a superpower acts. But when Obama talks about the long game, worrying less about whether a policy is a half loaf or a quarter loaf and looking instead at whether it pushes the political mainstream in his preferred direction is part of what he means. As an example, here’s how he put it in a press conference in 2010, defending his decision to agree to a temporary extension of George W. Bush’s high-income tax cuts: “Not everybody agrees with [liberals] … And so my job is to make sure that we have a North Star out there."

To those of us who are naïve enough to believe what we’re taught about our country — that it’s a representative democracy, that its government responds to the will of the people, that it’s capable of addressing grievous wrongs before it’s too late — Obama’s hyper-ambitious “long game” can feel, paradoxically, like small-ball. But if we keep in mind that the Constitution was, in many ways, designed so as to weaken democracy as much as possible without ultimately losing the people’s consent, the president’s gradualism is easier understood. What’s more, it reveals passages in Tuesday’s State of the Union like this one, which subtly pushes back not only Reagan-style conservatism but also against Clinton-style neoliberalism — which, in other words, make an affirmative case for government — as more significant than they initially seem:

[W]e need to set our sights higher than just making sure government doesn’t halt the progress we’re making. We need to do more than just do no harm. Tonight, together, let’s do more to restore the link between hard work and growing opportunity for every American … [A]t every moment of economic change throughout our history, this country has taken bold action to adapt to new circumstances, and to make sure everyone gets a fair shot. We set up worker protections, Social Security, Medicare, and Medicaid to protect ourselves from the harshest adversity. We gave our citizens schools and colleges, infrastructure and the internet — tools they needed to go as far as their effort will take them.

In the end, pushing the “supertanker” that is the U.S. government in a leftward direction, making sure its trajectory now bends away from a reflexive, Reaganite distrust and antipathy for the welfare state, has always been President Obama’s No. 1 goal. It’s what informed most of his most consequential decisions, from accepting a profoundly flawed and unsatisfying healthcare reform, to watered-down Wall Street reform, to self-defeating short-term austerity, and so on. On Tuesday night, for one of the very first times, he was able to tell the American people that following a new North Star had taken them to friendlier waters. Through that lens, however Hillary Clinton decides to run her likely presidential campaign is but a minor part of the equation.