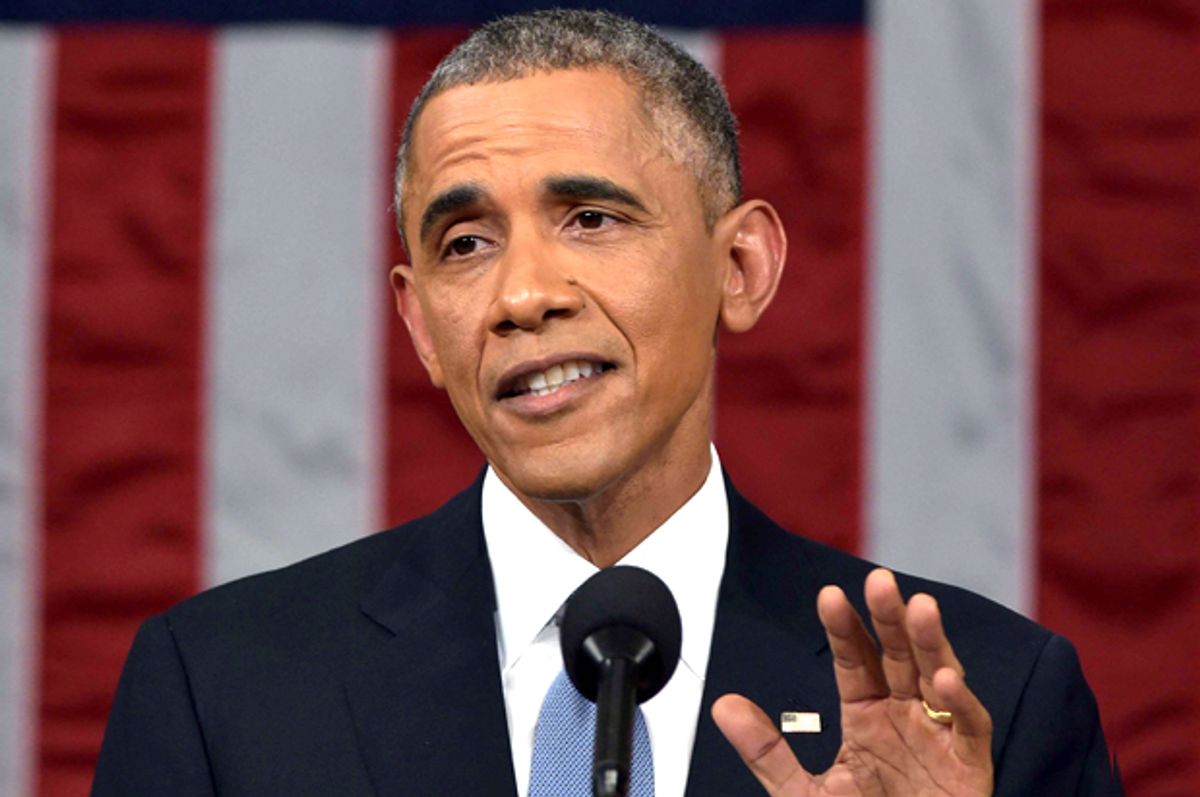 Once it emerged that President Barack Obama would call for mandatory paid sick and family leave for all American workers, conservatives predictably assailed the proposal. Fox News derided the initiative as a government "giveaway," while even the ostensibly sensible, moderate Sen. Lamar Alexander (R-TN) blasted paid time off as "one more government mandate" and an assault on "freedom." (It's a well-established fact that nothing says "liberty" quite like being forced to choose between your health and your job.) But a new survey indicates that the Republican Party's elected leadership and media mouthpieces are out of step with the party rank-and-file, which overwhelmingly agrees that paid leave is "the right thing to do," as President Obama put it in his State of the Union address last night.

The poll, commissioned by Make It Work and conducted by the Democratic firm Lake Research Partners, found that 65 percent of Republicans and 81 percent of Americans overall believe that equal pay, paid leave, and affordable and accessible child care are "good for the nation." 88 percent of respondents overall said that they generally favored paid sick and family leave policies, with 73 percent saying government has a duty to make sure employers offer those benefits.

As part of the survey, voters were also presented with a choice of two candidates: Candidate A, who “believes Family Comes First and this means supporting equal pay for equal work, making sure parents who work can have their young children in quality childcare, and ensuring every American can take time to recover from illness or care for families in emergencies without losing their paycheck,” and Candidate B, who "believes families are best served when they can make their own decisions and this means having employers pay as they see fit, opposing government-backed childcare, and allowing each employer the freedom to create policies about sick days and family leave that best suits their particular situation.” Respondents picked Candidate A by a margin of 53 to 29 percent, while Republicans only gave a slight majority (51 percent) of their votes to Candidate B.

Support for paid time off did dip when respondents were asked if it is "too burdensome" for employers, with 49 percent saying it isn't onerous for businesses and 43 percent saying it is. But other polling finds that voters still support paid leave policies even when presented with arguments against them. A 2014 Public Religion Research Institute poll showed that 74 percent of respondents favored paid time off after being told that such policies could reduce their wages and other benefits and impose burdensome business costs -- a negligible change from the 75 percent who supported paid leave prior to hearing those arguments. In the poll, 70 percent of Republicans said they'd support a law requiring paid sick and family leave for all workers, precisely what Obama is advocating.

Of course, paid leave policies don't figure nearly as highly on Republicans' list of priorities as on Democrats' and independents'. But the public opinion data underscore an awkward reality for Republicans crusading against the administration's proposal: They're not just bucking a majority of the public -- they're also flouting the will of their own voters.