State of the GOP is broken: I thought Joni Ernst was bad. Then I watched Ted Cruz 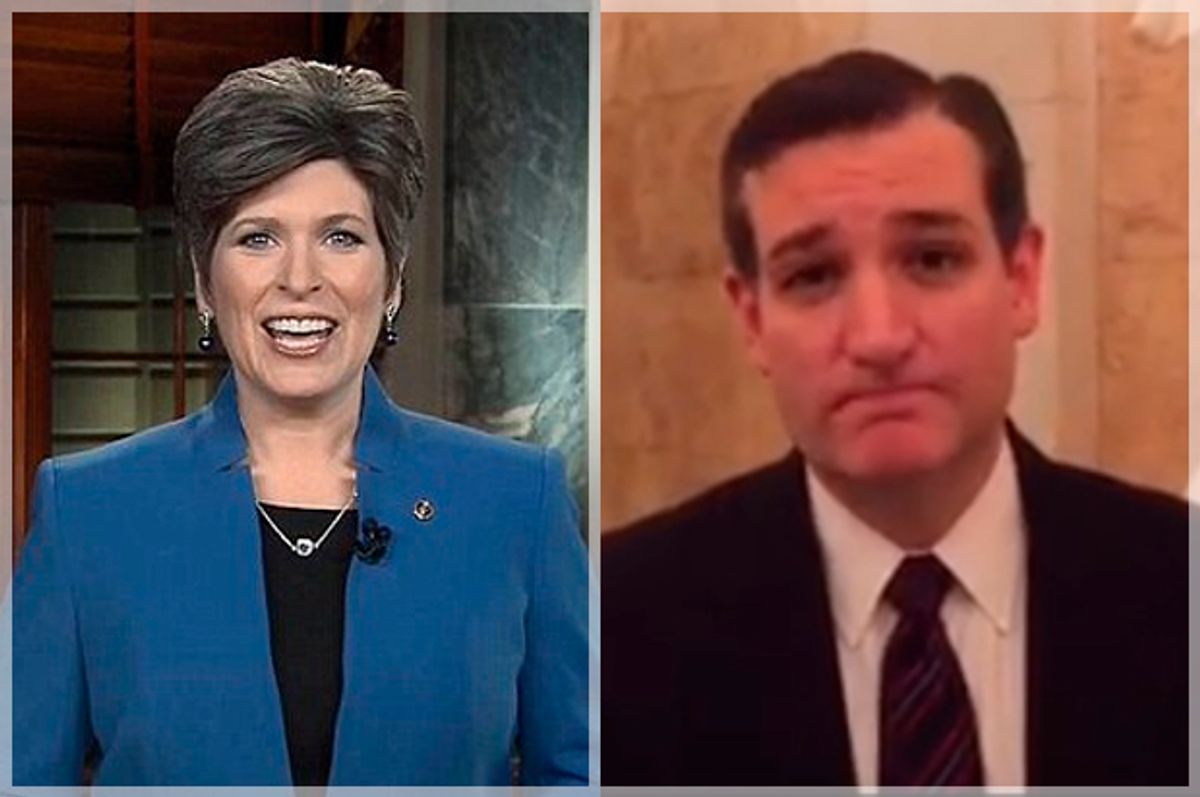 Watching Sen. Joni Ernst Tuesday night, I found myself thinking: If there’s a GOP establishment, it must consist of secret Democrats, because they so reliably sabotage their rising stars by assigning them the reply to President Obama's annual State of the Union address, way before they’re ready. Gov. Bobby Jindal and Sen. Marco Rubio moved from 2016 contenders to punch lines in moments.

Ernst seemed headed the same way, with her robotic sing-song delivery and her head-scratching anecdotes about bread bags on her shoes and working the biscuit lines at Hardees. She was clearly working to show voters that she’s a regular person who cares about the working class, even though she told the Koch brothers last June that they "really started my trajectory." It’s tough to square those notions, but Ernst took to the task with good cheer and the gumption you need to castrate hogs.

I always struggle with whether it’s sexist to reflexively compare female Republicans like Joni Ernst to Sarah Palin. It may well be, but it’s clear they also play similar roles in their party. Both women have been sized up as vice-presidential fodder (strangely, the GOP never seems to size up women as potential presidents, which presented a problem in 2008 when voters realized they were electing Palin to be a heartbeat away).

And to be fair, Palin and Ernst have other things in common. The GOP’s answer to feminism, its strategy for winning female votes without changing its anti-female policies, seems to be recruiting sassy frontier gals who hunt and ride motorcycles and, yes, castrate hogs, but do it all in lipstick and (camouflage) pumps. And hey, in Iowa, it worked.

But then I watched Sen. Ted Cruz’s star turn, and Ernst looked a lot better. And I realized it probably is sexist to find a robotic, sing-song delivery Palinesque: Cruz was just as robotic and staged, only with a deeper voice -- until his devastating “meh” moment. “Meh – let me start over,” he says, almost a minute into his Obama attack. And someone on his staff – again, a closeted Democrat? – posted the whole thing to YouTube.

I could watch Cruz’s "meh" moment on an endless back-to-back loop with Obama's "I know, because I won both of them" line. The Texas senator, a former debate champion and Supreme Court litigator, is supposed to be one of the party’s great orators? He made Ernst look good.

But the problems didn’t stop with Ernst’s cheerful mediocrity or Cruz’s arrogant pratfall. What does it mean that there were five GOP replies to Obama? (Or seven, if you count Mitt Romney and Jeb Bush on Facebook.) Historically, the SOTU response began as a way for the out-of-power party to compete with a president hogging the cameras for an hour to pitch his policies to a nationally televised audience. The modern Republican Party has taken that opportunity and fractured it.

There was the Spanish language version from Rep. Carlos Curbelo – the one that included immigration reform when Ernst's didn't. Guys, narrow casting doesn’t work anymore – even Google will translate for the monolingual.

And that Tea Party guy whose name I can’t remember? That just further branded the Tea Folk as irrelevant, given that its "stars" are supposedly Cruz and Rand Paul. Why not bask in their glory? (Paul actually delivered the reply in 2013.) Or maybe Tea Partyer has become synonymous with crackpot who can’t get elected to a statewide office, or who mistakes Obama administration staffers with visitors from India.

Meanwhile, “front-runners” and elder statesmen Mitt Romney and Jeb Bush borrowed a page from Palin and took to Facebook – Romney even reprised her famous “bridge to nowhere” joke, this time about Obama’s SOTU proposals.

Only Rand Paul made a semi-credible response, with a doom and gloom overview that made a welcome nod to racial unrest in Ferguson and elsewhere. For what it’s worth, he said more about the topic than Obama did.

Look, plenty of Democrats botched their SOTU replies. In (relatively) recent years, newly minted former Gov. Tim Kaine comes to mind, but he shrugged it off and now he’s a senator. You make a reply that doesn’t go well, and nobody talks about it the next day. That’s a big win, compared with seven dwarfish responses that prove the party is going to keep its firing squad arranged in a circle.

And remember, at this point we’re likely to see at least four of those guys – counting Bush and Romney, Paul and Cruz – in the 2016 presidential debates. Cruz was expected to be formidable, but you don’t get do-overs at live, nationally televised events, no matter how Republican National Committee chairman Reince Priebus thinks he can rig the rules. I’m not saying the Democrats have no problems or internal fissures, but their debates won’t feature anything like the GOP’s.

Expect the media to say that’s boring, and damaging to Clinton. But secretly, or not so secretly, Republicans wish they had Clinton’s problems.