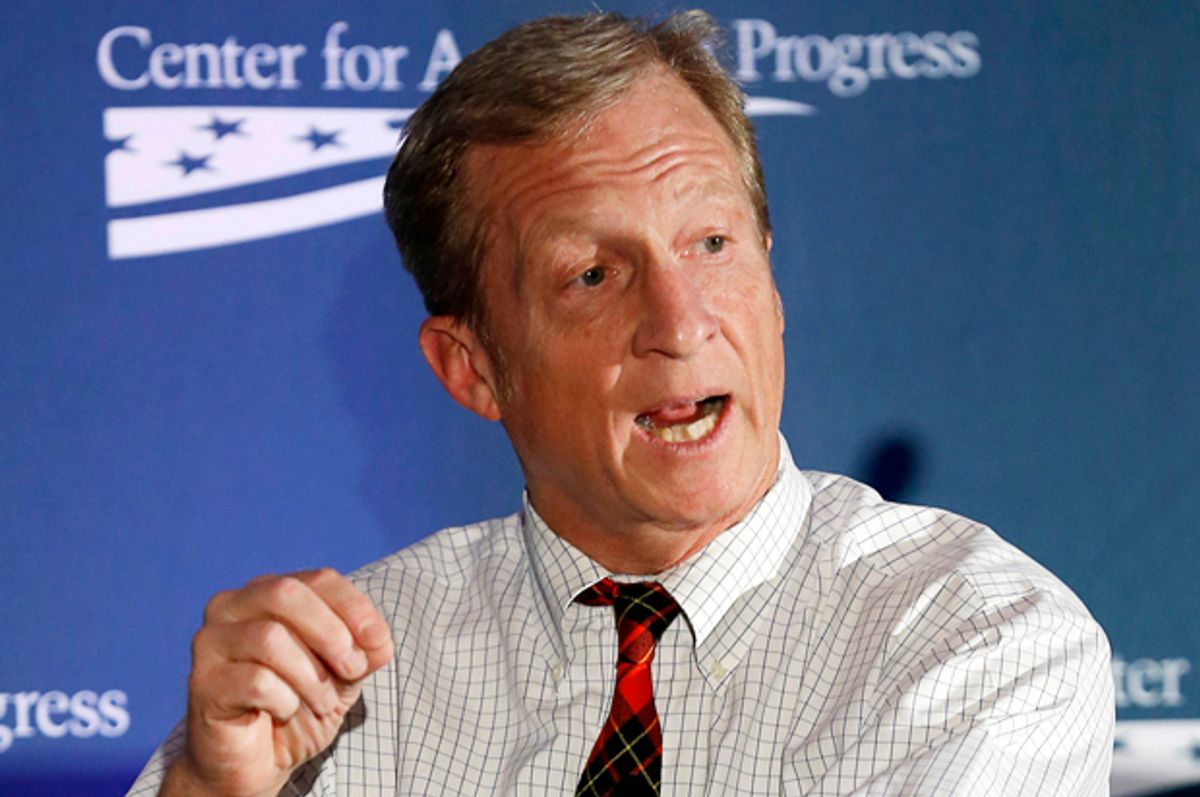 After Boxer announced earlier this month that she wouldn't run for re-election, Steyer signaled his interest in succeeding the four-term incumbent. Aides to Steyer even began planning a campaign under the name "Team Cincinnatus," an unfortunate designation when you consider that Cincinnatus was a Roman dictator notorious for his contempt for the plebeians.

But Sen. Cincinnatus was not to be. Steyer has decided instead to keep his focus on supporting Democratic candidates who will take action to combat climate change. Writing for the Huffington Post today, Steyer called climate change "a justice issue" and argued that how leaders respond to it "will define the success or failure of our generation." As he weighed a Senate run, Steyer wrote, he contemplated how he could best contribute to tackling that challenge, as well as economic inequality and education.

"This was a very hard decision," he wrote. "The U.S. Senate offers a unique opportunity to serve, but I also know that we will have excellent candidates. I applaud and respect those running, and am confident that Californians will choose a representative who will serve them well."

Ultimately, Steyer concluded that he wants to participate in the 2016 elections from the outside.

"Given the imperative of electing a Democratic president -- along with my passion for our state -- I believe my work right now should not be in our nation's capitol but here at home in California, and in states around the country where we can make a difference," Steyer wrote.

As Democrats seek to retain the presidency and retake control of the U.S. Senate next year, Steyer is sure to figure prominently in their efforts. The billionaire spent at least $74 million last year trying to elect pro-environment Democratic candidates; although most of Steyer's candidates lost, 2014 was a bad year for Democrats across the board, and the party expects 2016 to prove far more fruitful, given that it will be a higher-turnout presidential year.

While Steyer's bankrolling of Democratic candidates and outside groups led to a reputation as the left-wing counterpart to the conservative billionaire Koch brothers, Steyer is affiliated with the Hamilton Project, a centrist think tank linked to such neoliberal luminaries as Robert Rubin and Peter Orszag, and he has supported the Fix the Debt coalition, whose leaders advocate cuts in Social Security and Medicare in order to balance the federal budget. Those ties would almost certainly have given Steyer's Democratic opponents ammunition for attacks had he decided to vie for Boxer's Senate seat.

Even without Steyer, the field to succeed Boxer may prove a large one. Democratic State Attorney General Kamala Harris, who hails from the Bay Area, has already announced her candidacy, and a number of Democrats from the Los Angeles area, including Reps. Xavier Becerra, Adam Schiff, and Loretta Sanchez and former Mayor Antonio Villaraigosa, have all indicated that they're considering bids. Potential Republican candidates include Fresno Mayor Ashley Swearengin and 2014 gubernatorial nominee Neel Kashkari. Under California's "jungle primary" system, the top two finishers in the state's all-party June primary advance to the general election, even if they share the same partisan affiliation.