GOP's unexpected '16 problem: How gay marriage became a political liability -- for them

GOP presidential hopefuls say gay marriage should be decided “by the states.” Here's what that's really about 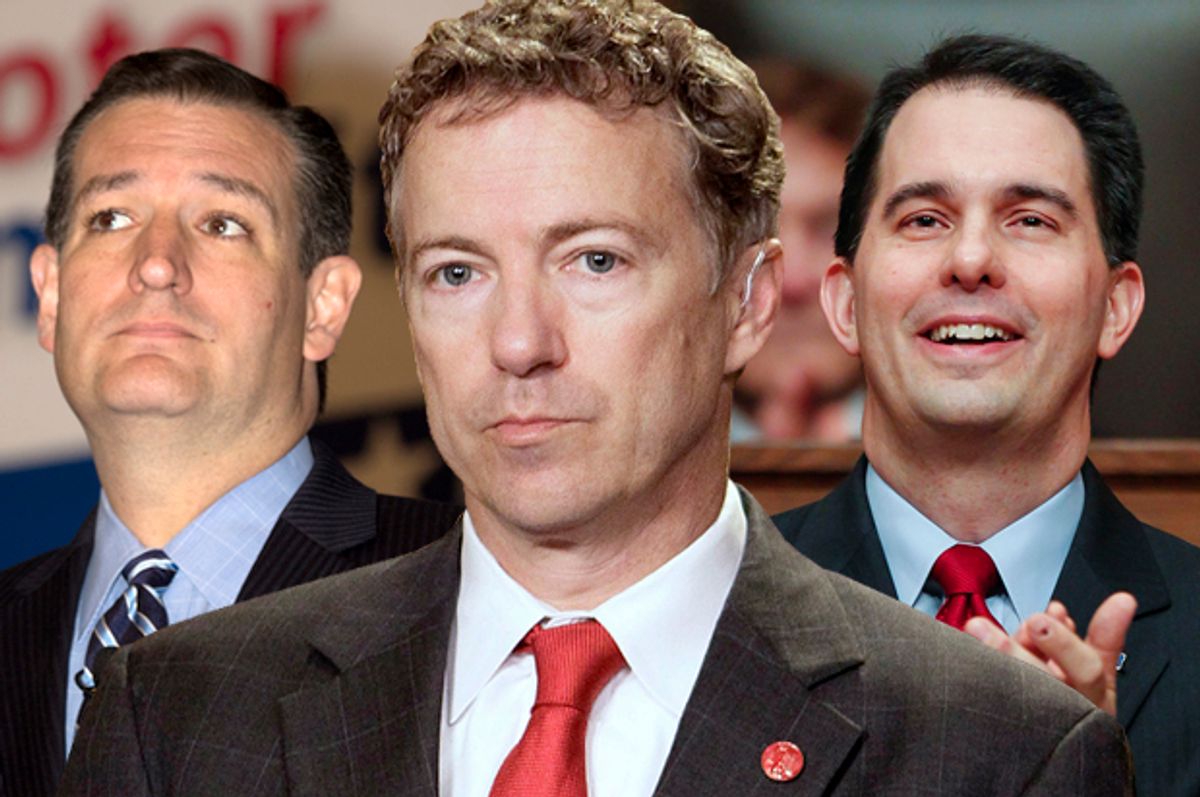 By this time next year, gay marriage will be legal in all 50 states. After passing up several appeals over the last year—thus allowing more states on the marriage-equality map to color in on their own—last Friday the Supreme Court agreed to review bans on same-sex marriage in Kentucky, Missouri, Ohio and Tennessee.

The danger of predictions is that you turn out to be wrong, but to gaze into my Magic 8 Ball, all signs point to a win: Gay unions are already recognized in 35 states and 60 percent of Americans support marriage equality, which means the court needn’t fear getting too far ahead of public opinion on a controversial social issue; the justices already struck down the Defense of Marriage Act (DOMA), which forbade the federal government from recognizing same-sex unions performed in the states; and of the dozens of rulings on gay marriage in the last two years, only three have sided with the opposition.

But most important, the swing vote on the bench is Justice Anthony Kennedy, the author of the two landmark gay-rights decisions of the past 20 years: Lawrence v. Texas, which decriminalized sodomy nationwide, and United States v. Windsor, the case that overturned DOMA.

It is hard not to see the parallel between bans on interracial marriage and bans on gay marriage. When the Supreme Court overturned miscegenation laws in 1967, 16 states still banned unions between members of different races; today, same-sex marriage is banned in 15 states. As Philip Bump at the Washington Post has noted, bans on interracial marriage were far more deeply (and ignominiously) rooted in our legal tradition than bans on gay marriage, which only came into being in the mid-1990s and 2000s. Another striking parallel: When the justices invalidated bans on sodomy, such laws existed in 13 states.

The Supreme Court is slated to release its decision just as the presidential primaries heat up in June. And while gay marriage may have been used as a cudgel against John Kerry in 2004, in 2016 it will be the GOP that must strive to neutralize the issue.

Conservative hopefuls face the same conundrum on same-sex marriage, for which there has been an unprecedented surge in support over the last 10 years, that they do on an array of issues: The Republican base is far to the right of the American public on the issue. Any candidate who hopes to win the party’s nomination has to cater to the GOP’s intolerant base during the primaries, then pivot to the center for the general election, all the while not appearing to flip-flop.

Former Arkansas governor and Fox News personality Mike Huckabee is the outlier on same-sex marriage; he has threatened to leave the GOP if the party caves. But all the other Republican front-runners have softened their hard-nosed opposition to gay marriage, which the Republican National Committee’s post-2012 election “autopsy” indicated is key to winning over young voters.

Jeb Bush, Rand Paul, Chris Christie, Rick Santorum and Ted Cruz continue to repeat the GOP marriage mantra—“I believe marriage is between a man and a woman”—whenever asked, but there’s a corollary. In the same breath, the Republican candidates say “the states should decide.” The evolution here is subtle but important. In essence, what this crop of Republicans has done is replace a moral objection with a procedural one. It sounds principled to the states’ rights fanatics, but nobody on either side of the debate really cares how the fight is won or lost; they care about the outcome, which is why you hear social conservatives praising the courts when they rule in their favor and decrying their overreach then they don’t.

In the past, Santorum and Cruz have supported amending the U.S. Constitution to ban gay marriage, and Paul, Christie and Bush have all said same-sex unions should not be imposed by the courts. But the “leave it to the states” sidestep opens each of the candidates up to passively accepting gay marriage. This is precisely what’s happened with Christie in New Jersey and Bush in Florida. When these states legalized same-sex unions, Bush and Christie railed in typical fashion against “judicial activism,” but said they would uphold the rule of law in enforcing the decisions nonetheless.

It would have been a lot harder for Christie or Bush to back down if they’d predicted plagues and locusts if marriage equality became law and pledged to fight same-sex marriage—they’d be expected to deliver on that promise. But the procedural objection is a lot softer: Whether social conservatives win or lose, it’s not a national issue that needs to be discussed in a presidential election.

Conservatives’ shift on gay marriage is a frank acknowledgment that marriage equality will be the law of the land by the time the next president assumes office. With the battle waged and lost, attention has now turned to damage control.