The Facebook founder's book club choices are a useful (and kind of touching!) window into his inner life 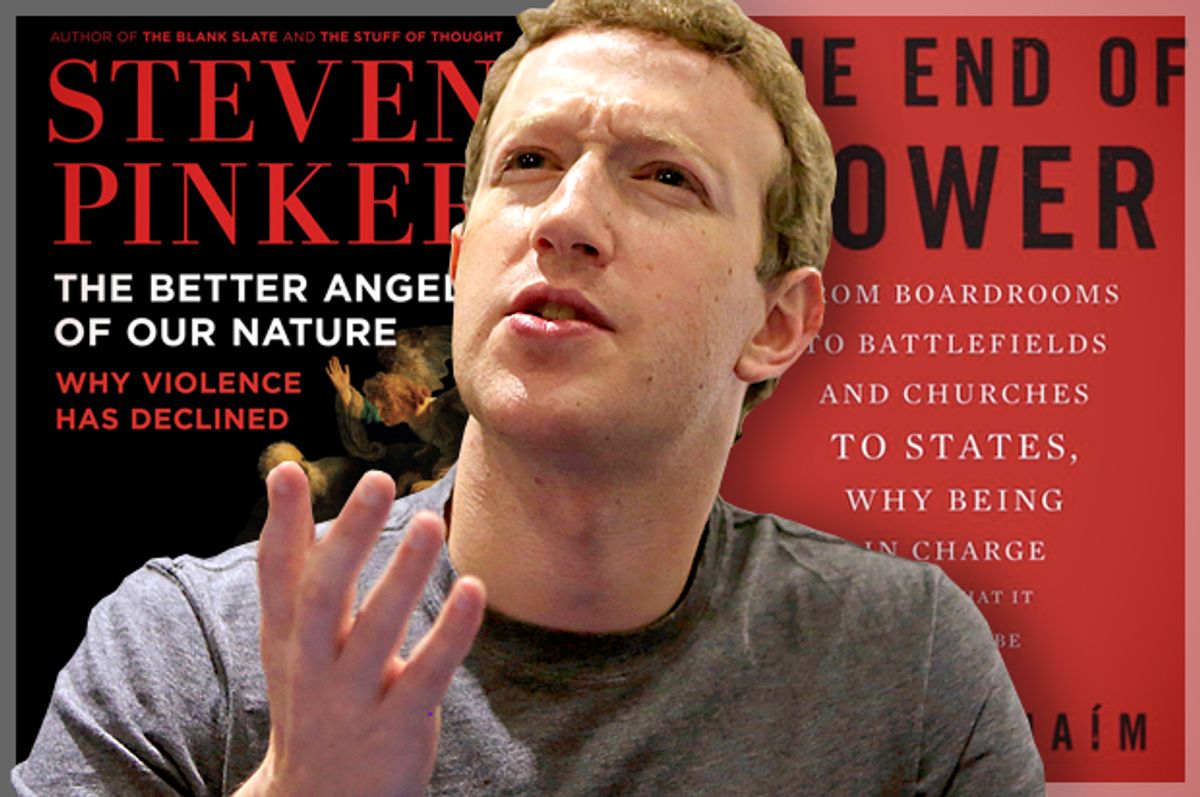 When Mark Zuckerberg announced on Monday that the second title to be discussed in his new book club is Steven Pinker's "The Better Angels of Our Nature," much came into focus. Let me explain: Among the ranks of professional book-recommenders (there aren't a lot of us, but we do confer among ourselves), it's a rule of thumb that you can't really get a bead on a particular reader's tastes until he has given you the titles of at least three books he's loved.

The process is a little like the triangulation used to pinpoint a particular cellphone by measuring its relative distance to three different towers. A reader might cite, say, Susanna Clarke's "Jonathan Strange and Mr. Norrell" as a book she enjoyed, but you can't be sure whether what pleased her is that novel's fantasy elements or its resemblance to historical fiction or Clarke's deft evocation of a Georgian prose style. Knowing a few more of her favorites will almost always make the picture clear.

Most of the coverage of Zuckerberg's book club has taken the perspective of the publishing industry and invokes the hallowed name of Oprah. Will the Facebook founder become the book business' new Prince Charming, bestowing instant fame and bestseller status on some obscure but deserving author twice a month? News outlets reported on both the sales bump enjoyed by Zuckerberg's first choice, Moisés Naím's "The End of Power" -- 13,000 additional copies sold, according to Publishers Weekly -- and the underwhelming participation in the Facebook-hosted author interview and discussion of the book last week. (Only about 200 people joined in.)

But far more intriguing is the emerging portrait of Mark Zuckerberg as a reader. He is diligent, even driven, setting himself the challenge of reading and discussing a new book every two weeks, despite what must be a pretty full schedule as the CEO of the most popular social networking site on the planet. Most real-life book clubs can barely manage a book a month, and even then a good percentage of the members won't have found time to read it. "The Better Angels of Our Nature," which argues that humanity -- contrary to the impression left by the media -- has become increasingly less violent over the course of its history, is a daunting 830 pages long, so Zuckerberg is graciously allowing a full four weeks before the discussion of that one.

Pinker -- a psychology professor best known for "The Language Instinct" and "The Blank Slate," and other popular explications of evolutionary psychology -- is, like Naím, a big thinker. Naím's "The End of Power" observes and documents a shift in the ability to control people and events from large entities like nation-states toward smaller groups and individuals. The most obvious similarity between the two titles is their meliorism, that is, their conviction that the world is improving. (Arguably, Naím is less optimistic than Pinker, but some critics have challenged him for not fully exploring and questioning the increasing influence of financial powers like corporations.)

You can see why such perspectives would appeal to Zuckerberg: He's young, a guy who began by creating a website to catalog pretty Harvard women and ended up a billionaire with a startling degree of influence on the average citizen's media consumption. That said, books about how the world is getting better have never been a winning proposition for the publishing industry. From "The Closing of the American Mind" to just about any work by today's name-brand political pundits, there's far more bank in bemoaning how we're going to hell in a hand basket.

That's partly because most purchasers and readers of serious hardcover nonfiction (excluding textbooks) tend to be over 40, and have a perhaps inevitably less rose-colored view of the world. This is no knock on people in their 20s and 30s; when you're getting an education, building your career, searching for a life partner and starting a family, you have a lot less time and energy for weighty discretionary reading. Those who review a lot of this sort of nonfiction -- history, biography, sociology -- recognize that a significant chunk of their readership consists of middle-aged people embarked on a course of reflection and self-education, returning to subjects they ground through in college with their eyes on the prize of good grades. Once they're established in life, they often return to subjects they once viewed as a means to an end, searching for a deeper understanding.

It's my unscientific impression that many of these readers are men. (Women make up the vast majority of fiction book buyers and readers, and they tend to favor fiction throughout the course of their lives.) Zuckerberg seems to be in a similar position, even if for him the process has been accelerated by his extraordinarily early success. When he wrote, upon announcing his reading challenge, "Books allow you to fully explore a topic and immerse yourself in a deeper way than most media today ... I’m looking forward to shifting more of my media diet towards reading books," he sounds exactly like one of these readers.

Some have mocked the stilted diction of both Zuckerberg's praise for books in general and his review of Naím's book in particular. (It reads like an uninspired term paper.) But, hey, the guy is not a writer and doesn't pretend to be, and personally I find his quest for meaning kind of touching. For what it's worth, it has humanized the social-media mogul in my eyes. That's some kind of achievement, given that, like a lot of people, I find his public persona off-putting, from his libertarian and techno-utopian outlook to his wide-eyed, blank-faced resemblance to a refugee from an "Archie" comic book.

Zuckerberg's new interest in books -- I'm going to conclude from the woodenness of his own prose style that he hasn't been an avid reader from childhood -- seems to coincide with changes at Facebook. The site is constantly tweaking the algorithms that determine what users see uppermost in their timelines, and sometime last year it was adjusted in ways that significantly decreased the prominence of insubstantial stories that consist of little more than news aggregation. This has been a big deal because Facebook is now the single biggest conduit of readers to online journalism. The shift has caused the traffic of sites that specialize in recycled gossip and brief, cookie-cutter "takes" to plummet. Rumor has it that the impetus for the change came at least in part from Zuckerberg, who was fed up at the junk that filled members' Facebook feeds and wanted more weight given to links to meatier stories.

If this is true, it would make Zuckerberg an unlikely champion for the sort of culture that social media has been accused of decimating: original feature articles and reporting and, now, books. But how much influence Zuckerberg himself will exert is unclear. His own Facebook page and the page for the book club are, like most Internet forums, a cacophony of irrelevance, kvetches and ax-grinding. (Many of the posters are very intent on getting Zuckerberg to read the Quran. Good luck with that.) Participants complain of not being able to find Naím's book or not having time to read it. Others are manifestly interested in the title only because it has been recommended by a billionaire and may contain a key to their own success. Still others are thrilled simply to be in the virtual vicinity of such an icon and desperate to seize a shred of his attention.

For all his fame and power, Zuckerberg is not Oprah Winfrey, and the influence he exerts differs radically from hers. Ironically, the man who brought us the concept of "friending" is not at all good at making people feel that he is their friend. That, by contrast, is Oprah's forte; her fans read the books she recommended because they felt they knew her well and believed that what she loved, they, too, would adore. Despite the seeming populism of her book club and the talk show that spawned it, both were rigorously curated and produced endeavors designed to instill the sensation of intimacy despite relatively little direct contact. Viewers who read along with Oprah's club could watch a carefully selected group of guests chat about the book over a staged dinner, but they weren't discussing the book with Oprah themselves and didn't really expect to.

There's another irony: Expertly faked intimacies can feel more authentic than actual interactions. Oprah talking out of a TV screen seems to be genuinely connecting with us, while Zuckerberg's replies to comments on his Facebook page (yes, he does it), seem dubiously pro forma. And who's to say that this impression isn't correct in its own way? While I wish Zuckerberg well in his current intellectual journey, this is one reason why I hope he'll expand the books he reads beyond nonfiction (although if you disagree with Naím's and Pinker's takes on history, perhaps you think he already has). Fiction is a lie that tells the truth, and sometimes tells it better than facts. That's a paradox for sure, but when Mark Zuckerberg decides to spearhead a return to reading books, then it looks like paradox is where we all live.

The official site for A Year in Books, Mark Zuckerberg's new book club

Mark Zuckerberg's review of Moisés Naím's "The End of Power"