The end of Hathahate: How Anne Hathaway outgrew her haters 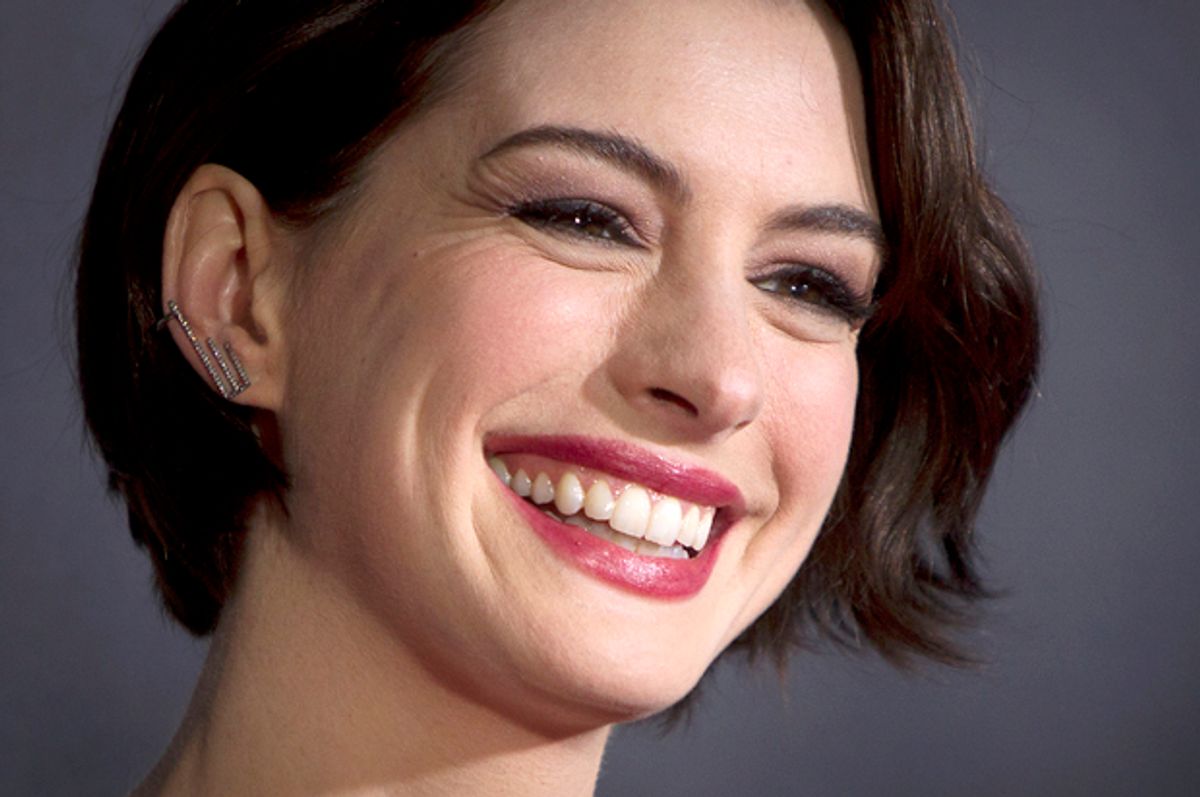 2013 awards season was the era of peak Hathahate. As Anne Hathaway racked up the statues for her performance as Fantine in" Les Mis," with every speech she gave, the once-beloved actress simultaneously unleashed a tidal wave of public vitriol usually reserved for war criminals or the stars of amateur music videos. This, in turn, spawned numerous think pieces analyzing the source of the world’s Hathahatred, from her try-hard vibes to her overbearing perfectionism. "She’s got this theater-kid thing where she adopts the mood of every situation she’s in ... but wildly overcompensates every time,” said critic Richard Lawson, while scientist Terry Pettijohn took a more empirical approach, saying, “When times are good, we prefer actresses with rounder faces.” Suffice to say, whatever the reason, the world had turned against Anne Hathaway.

Yesterday — almost exactly two years after the backlash reached its zenith — it was announced that Hathaway was to star in a one-woman play, George Brant’s "Grounded," about a fighter pilot facing an unexpected pregnancy. Had the words “Anne Hathaway” and “one-woman play” (and perhaps “pregnancy” and "fighter pilot") appeared together in a sentence back in 2013, the response would have been swift and merciless. Yet while Twitterverse tossed off a couple of tired jokes last night when the news was announced, mostly the sniping felt toothless, like people reading lines from an old script. Meanwhile, the attitude among the media folks who had once gleefully proclaimed their Hathahate seemed to have shifted somehow -- away from schadenfreude at someone making oblivious public missteps, toward a warm, if ironic, enjoyment at someone playing into their public persona (and perhaps, too, an acknowledgment of the ridiculousness of all the outrage directed at this talented, self-possessed feminist with great teeth in the first place). This tweet from Vulture’s Abraham Riesman might just sum it up:

Let me call it now: Hathahate is over. Hathatlove is in. It's time to allow your unwarranted hatred to morph, gradually, into ironic appreciation and finally, inevitably, into some sort of genuine affection (pretend like its October 2014 and you're realizing that you suddenly like Taylor Swift).

Here’s how Hathaway was able to slide out of her P.R. crisis:

1. Stay under the radar
After the backlash hit, Hathaway smartly employed what I call the Milford School of crisis P.R.: Be neither seen nor heard. Despite the various flaws people like to name-check — try-hard, theater-kid, too smiley, etc. — Hathaway’s biggest problem was ultimately overexposure. Nobody is immune to it; even golden girl Jennifer Lawrence announced an upcoming hiatus for fear of wearing out her welcome. Staying out of the limelight enabled public hatred to dissipate at its own rate, which, as we have seen time and time again, it always does. Like playing hard to get in a relationship, public approval comes in cycles: Something is loved, there is inevitable backlash, and then backlash to the backlash brings it back into vogue again, while making room for a new public enemy No. 1 to emerge in its stead.

2. When you return, return with something bigger than you...
It’s a truth of the modern age that the public’s inexplicable hatred for Anne Hathaway is matched only by its inexplicable love for Christopher Nolan (truly, it’s not by virtue of Nolan's filmmaking genius that his movies are always No. 1 on IMDB). Associating herself with an eagerly-anticipated cultural phenomenon was surely a smart move, as was taking on an atypical Hathaway character: prickly, competent and unshowy.

What’s more, a Nolan movie is always such a marquee event, providing so much press and reviewer fodder of its own -- black holes, plot holes, McConaughey, TARS — that Hathaway was bound to become just a footnote in the conversation, which is a good thing (see point one). Nolan has such a strong directorial hand that even the critics who didn’t enjoy her performance could blame it on the man behind the camera. As The Wrap's Alfonso Duralde wrote, Nolan's women are “ruled by their, you know, lady feelings, before ultimately capitulating to the men around them, even though the men aren’t that stable themselves.” Heck, even media darling Jessica Chastain fell prey to these sorts of criticisms.

3. … and then much smaller
She then followed "Interstellar" up with “Song One,” a movie that should, by all logic, be despised: A musical romance set in gentrified Brooklyn starring Anne Hathaway (have you ever heard so many trigger words in one sentence?). Yet as Salon critic Andrew O’Hehir wrote of the film yesterday, the film was almost impossible to hate: "This is a sweet-tempered and small movie that’s not remotely trying to be hip. If anything, it’s almost aggressively square ... It won’t change Hathaway’s life or anyone else’s, but if you choose to read “Song One” as part of the gamine star’s campaign to relaunch or reorient her acting career after an Oscar win and a period of severe celebrity overexposure, then it hits that goal.”

4. Come across as authentic and self-deprecating (aka “be more like J.Law”)
After her retreat from the limelight, whatever media training Hathaway underwent in her top-secret paparazzi-proof bunker seems to have paid off. If critics initially faulted her for her earnestness and sincerity, she returned to the talk-show circuit with a new level of wry self-awareness. The highlight of this was her appearance on the "The Tonight Show," when she talked about her most embarrassing moments with the fearless aplomb of J.Law talking about her bowel movements on "Letterman". As she put it, "The thing about me and embarrassment, you have to remember, is that it all happens on a scale. So on a scale of 1 to 10, 1 is just like being a person walking down the street, and 10 is, for me, co-hosting the Oscars with James Franco. Which, by the way, is only tied with being honored to accept an Oscar whilst wearing a dress that I knew made it look like my nipples were erect." Big laughs abounded.

A similar likability (and vulnerability) was on display on "Ellen," when she gave a moving account of what it's like to be the target of public bullying, in her knowing remark advising Neil Patrick Harris to "do the opposite of what she did" at the Oscars, and even in her charming gigglefest on "The Daily Show" last night. Next time she was on "The Tonight Show," she even got away with a rap medley (in which she called out the Hathahaters, naturally). It was totally fine!

5. Commission a savvy magazine profile
One well-done profile can do just as much to resuscitate a career as it can to tank it (as Anthony Wiener well knows). In October, Harper’s Bazaar came out with a big spread titled "Kiss and Make Up With Anne Hathaway: We Dare You," which shamed the public for its Mean Girl-style bullying, while Hathaway came out looking grounded and real, both when talking about how traumatic the experience was ("punched in the gut. Shocked and slapped and embarrassed. Even now I can feel the shame. I was in crisis") and how she came out of it stronger ("This whole thing has made me a way more compassionate and loving person. And I don't feel sorry for myself.") You couldn't help but come out feeling bad for Hathaway while also feeling a bit like a playground tormenter, and wondering what on earth all this hatred was for in the first place.

6. Play into it
OK, so I don’t know if this one-woman-play thing was a calculated move, but if it was, it’s sort of genius. Instead of upending expectations (which is arguably what "Interstellar" and "Song One" did), she is playing right into them. Why else would someone who gets slammed for being a limelight-hogging theater kid agree to star in a Broadway play featuring only her? And damn, I kind of love it. The problem before was that Hathaway was perceived as being inauthentic and trying too hard; paradoxically, in playing into all the public’s expectations of her, she owns the brand that has been unwittingly thrust upon her, and comes off as more authentic -- more unapologetically herself. And hey, this newly minted Hathafan can get on board with that.