The right's judicial hypocrisy: Why it's so inconsistent on "activism" in the courts

As they try to pull back Roe v Wade, here's why it's impossible to discern conservatives' judicial philosophy 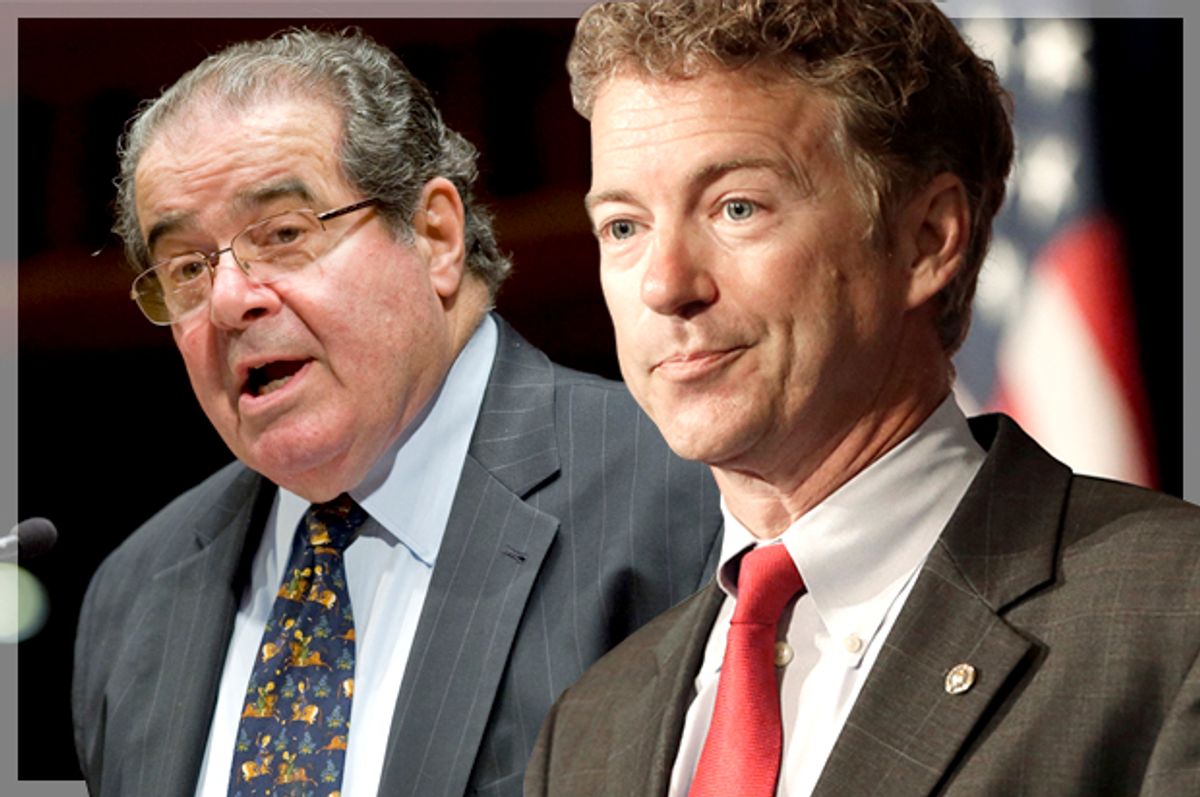 During the 1960s it was an article of faith on the right that the Supreme Court was out of control. Opinions going back to segregation in the 1950s and subsequent federal involvement in enforcing those rulings had convinced staunch segregationists that the court was a menace to society and they breathed new life into the old confederate rationalization for the civil war: States' Rights. If you happened to drive through the southern states during that period you'd commonly come upon signs like this one:

The campaign to impeach the Chief Justice was originally proposed by the John Birch Society which believed that laws and constitutional interpretations promoting racial equality were a Communist plot and therefore the judges who enabled it were Communist sympathizers. Indeed, the first calls for Justice Warren's impeachment said that explicitly:

As time went on and the rights revolution expanded in the 1970s, the right wing loathing for the Supreme Court reached a fever pitch. As this article by Randall Balmer explained, once mainstream society began to get queasy about unabashed racism, the conservative movement came upon a new pitch to their followers: abortion. In 1979, six years after Roe vs Wade, they amped up their criticism of the Supreme Court on this new basis, ushering in 30 more years of shrill denunciations of "judicial activism."

The term became a code word for "liberal" in political campaigns as Republicans (and some of the old conservative lions of the Democratic Party before they all retired out) were called upon to make promises that they would not nominate or approve of any judicial activists for the federal bench. Politicians like President George Bush the First made speeches fulminating about it:

"The judges ought not to take the place of the legislative branch of government ...I believe in strict constructionists."

"Strict constructionist" was held to be the preferred philosophy on the right which basically limits a judge's discretion to interpret the law in any way that it has not been interpreted before. (The sub-category of "originalist", flamboyantly represented by Justice Antonin Scalia, says judges must inhabit the minds of the 18th century framers and interpret the laws as they would have in their own time, which is truly daft.) But in the mouth of a late 20th century Republican politician, "strict constructionist" and "judicial activist" were dog-whistles to the racist base which first came to loathe the Supreme Court for ruling that little African American children deserved to go to the same school as any other American and set in motion a series of legal challenges that ended the centuries old system of Jim Crow.

In more recent years it was just a rallying cry for general loathing of the courts which conservatives believed were constantly forcing white people to do things they didn't want to do. The Christian Right was particularly active politically and their long-standing gripes about prayer in school and abortion were particularly motivating.

Back in 2002, Phyllis Schlafly's Eagle Forum sent out this warning declaring that the judicial activism was "the biggest issue of the 2002 election." Think about that. It was one year after 9/11 and Schlafly didn't miss a beat. By 2005, at the height of their power controlling both houses of congress and the White House, conservative legal scholars held a meeting in Washington at which Tom Delay, then the powerful House majority whip declared:

"The sanctity of the Constitution is under assault from many different directions. "The branch of government charged with maintaining the sanctity of the Constitution no longer feels bound by the constraints of that same Constitution. The courts today recognize no limits on their authority. They legislate with reckless abandon. They overturn the will of the people as expressed through their legislative representatives. What we're left with is an imperial judiciary that knows no bounds to its power or its tenure. This is a recipe for tyranny!"

He then brought the crowd full circle to be met with energetic applause from the room full of conservative lawyers:

"America's founders believed that impeachment could be an effective way to keep the judiciary within its proper bounds. When judges exercise power not delegated to them by the Constitution, I think impeachment is a very proper tool."

The 2008 GOP Platform had this to say about it:

"[J]udicial activism is a grave threat to the rule of law because unaccountable federal judges are usurping democracy, ignoring the Constitution and its separation of powers, and imposing their personal opinions upon the public."

Even today, National Review has a recurring feature on their web-site called "This Day in Liberal Judicial Activism." It has a part of GOP dogma for so long that all a candidate has to do is utter the words in a stump speech and the well primed crowd will cheer and hoot as if he'd just declared the end of World War II. Nothing has been more fundamental to modern conservatism than the notion that the federal judiciary must be restrained from any decision that overturned precedent (or Scalia's time travelling mind-meld with Alexander Hamilton) lest they betray our most cherished constitutional principles.

So what are we to make of Republican Senator Rand Paul who just last week stood before the Heritage Foundation and declared, "I am a judicial activist"? (They didn't escort him out of the building.) This piece by Ian Millhiser at Think Progress explains what Paul meant by it, which also explains why a room full of conservative activists didn't explode in anger:

Lest there be any doubt that Senator Paul, himself an elected official, believes that the problem with American government is that it gives the people too much say over how they are governed, Paul endorses the Supreme Court’s long-ago overruled decision in Lochner v. New York. Lochner, which Paul has also praised on the Senate floor, invented a so-called “right to contract” that employers could use to resist laws protecting their workers. The idea was that the Constitution places strict limits on any laws that interfere with people’s ability to enter into contracts. So if an employer wants their employees to work 18 hours days, or if it wants them to sign away their right to unionize, or if it wants to pay them just a few pennies an hour, then the workers who agree to do so cannot seek refuge in the law even though they were forced into these jobs by desperate circumstances.

For decades, the Supreme Court wielded Lochner to strike down minimum wage laws, laws protecting the right to organize, and similar protections for workers. Lochner is now taught in many law schools as an example of how judges should never, ever behave.

This is a libertarian legal view and a minority one at that. But Paul is also tapping into a strain on the right that isn't all that interested in legal theories and just wants the court to do what they can't get done with a Democratic president ready to veto anything their congressional majority passes. Unless a Republican is in that office they consider any action by the executive branch to be undemocratic. So they would like the court to step in an do their bidding. Paul knows that this isn't about any arcane legal philosophy, it's about getting your way.

When Chief Justice John Roberts failed to vote to overturn the individual mandate many conservatives came this close to calling for his impeachment. In fact, many of the rank and file did use the "i" word on internet forums. And maybe that's just reflex since they have been constantly calling for Supreme Court justices to be impeached since the 1950s. But if one of the conservatives votes the wrong way on the next ACA case, King vs Burwell, we can probably expect Paul's line to be embraced by many on the right. Nothing gets them riled up more than Obamacare and they expect their hand-picked judges to do what they put them on the court to do: disembowel liberalism.

Judicial activism is now a positive good and anyone who disagrees is a liberal constructionist --- and nothing could be worse than that. Just have Antonin Scalia ask one of the founders next time he travels back to the 18th century. Regardless of what John Roberts or Anthony Kennedy do, he is one justice who will surely return to our own time with the answer they want to hear.