"I think every girl is a type of slut": What an attempted mass-murderer's words reveal about our sexual culture

Ben Moynihan is clearly abnormal, but his attitudes about women who refuse to have sex with him are scarily common 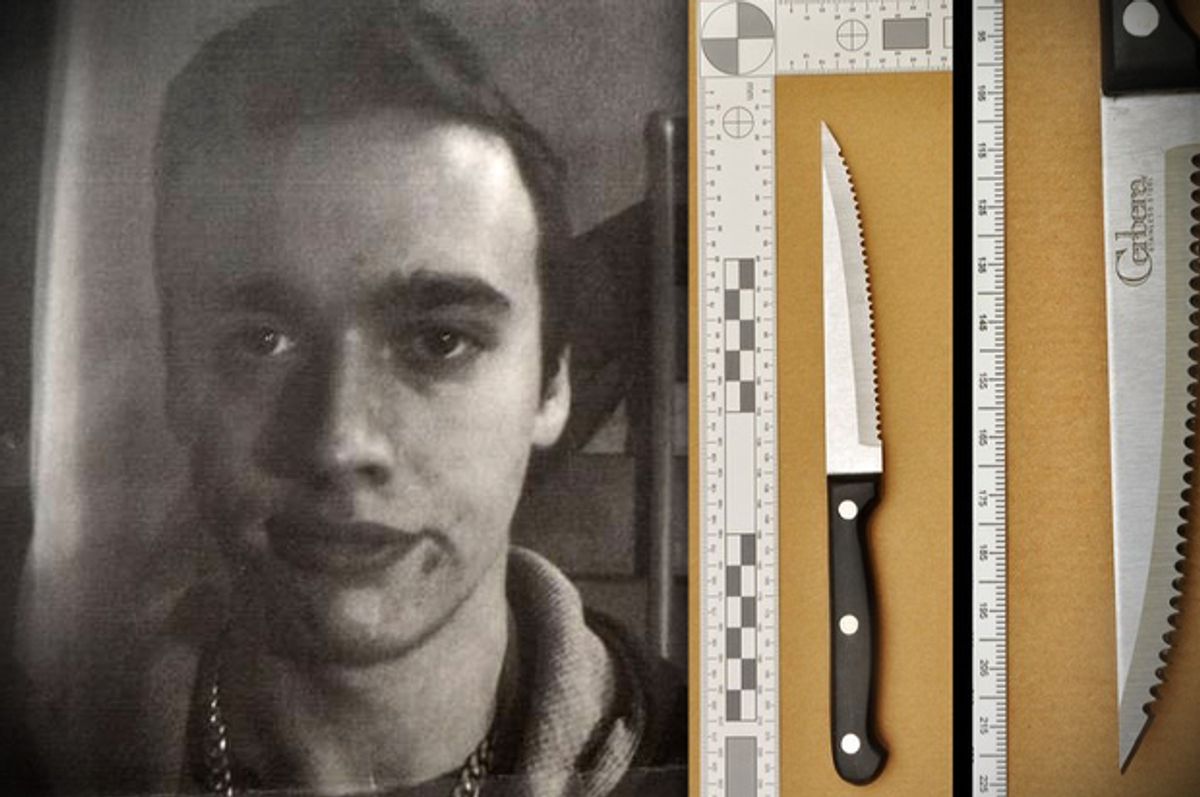 Ben Moynihan and the knife he used to stab three women. (Hampshire Constabulary)
--

“When women won’t talk to you, it’s heart breaking. Why are they fussy with men now days?” Who do you think wrote that sentence? Maybe an angst-ridden teenage boy who just hasn’t yet figured out the opposite sex -- or perhaps even a lonely young adult frustrated with his dating life. These are the type of sentiments you hear all the time from frustrated single men. No big deal, right? But here is another sentence written by the same person: “All women needs to die and hopefully next time I can gauge their eyeballs out.”

The young man behind these messages is 18-year-old Ben Moynihan of Portsmouth, Hampshire. This week, he was found guilty of attempted murder. Over the summer, he stabbed three women, all complete strangers who were unlucky enough to become targets of his rage toward the entire female species. His victims survived, but as he later told police, he fully intended to murder them. This wasn’t because he was a “psychopath,” he wrote in a letter, but because women.

In a self-recorded video, Moynihan said, "I think every girl is a type of slut, they are fussy with men nowadays, they do not give boys like us a chance.” He continued, “I am still a virgin, everyone is losing it before me, that's why you are my chosen target.” While waving a knife at the camera, he asked, "Shall I stab you in the neck or in the heart, shall I slash your throat or should I just cigarette lighter you or just fire you. I do not know where I could get petrol from but how hard can it be to come by.”

He ended with this warning: ”So I hope you learn a lesson not to bully guys like us, we deserve dignity, for your own generations, remember.”

It's shades of Isla Vista all over again. Just under a year ago, 22-year-old virgin Elliot Rodger went on a shooting spree near the University of California, Santa Barbara. He killed seven people, including himself. In several Internet postings, including a 141-page manifesto, he made his motive clear. It is perhaps best summarized in a video he made hours before the attacks: “For the last eight years of my life, ever since I hit puberty, I’ve been forced to endure an existence of loneliness, rejection and unfulfilled desires, all because girls have never been attracted to me," he said. "If I can’t have you, girls, I will destroy you."

Rodger is just the most infamous and recent example of men exacting headline-making revenge on women for, well, not having sex with them. Anyone remember George Sodini? In 2009, the 48-year-old went on a shooting massacre at a gym in Pittsburgh, Pennsylvania, killing three women and injuring many more. He too posted online about his lack of sex. "No girlfriend since 1984 ... Who knows why. I am not ugly or too weird. No sex since July 1990 either (I was 29). No shit! Over eighteen years ago. And did it maybe only 50-75 times in my life. … I masturbate. Frequently." He also wrote, "I have slept alone for over 20 years. Last time I slept all night with a girlfriend it was 1982. Proof I am a total malfunction. Girls and women don’t even give me a second look ANYWHERE."

Certainly, mental health is a critical part of the equation in these cases. Not all lonely masturbators set out to commit mass murder. Most pose a far greater threat to tissues than women. But we should be alarmed that these outlier men are driven by attitudes that are everything but outlying. We should be concerned when a mass murderer's -- or attempted mass murderer's -- manifesto reflects widespread beliefs. The rants about girls not going for nice guys and the bile directed at women for being slutty? It's all utterly familiar. Take away the actual threats of murder and these remarks could just as easily have come from an unremarkable college virgin, hapless online dater or Salon commenter -- sorry, but it's true! -- as Moynihan, Rodger or Sodini. In fact, you can even leave in the threat of violence and still have something uncannily resembling what many women encounter daily online, if not also in the real world.

I'm not sure that there has ever been a clearer expression of the deeply fucked-upedness of our attitudes toward sex.

At the root of all this is male sexual entitlement and the desire to control female sexuality. That has been going on since the dawn of time and it continues today in all sorts of sickly ingenious ways -- from blaming women for their own sexual assaults to restricting access to birth control and abortion. It's no surprise that as women have gained greater sexual autonomy, a certain kind of man has gotten much, much angrier. By "a certain kind of man," I mean any man who has been poisoned by our culture's toxic masculinity, and who doesn't get that to which he feels so entitled (read: any woman he wants).

It isn't just women who are hurt by this. All but one of the men I mentioned earlier ultimately killed themselves, and Moynihan, the only one who didn't end his violent spree in suicide, will be in prison for a very long time. As Amanda Hess wrote in the wake of Rodger's shooting spree, misogyny serves to control men too. "It expresses itself in the bullying of insufficiently masculine boys, in the pervasiveness of homophobic slurs, in the suppression of open emotional expression among men, and in overwhelming violence against trans women, who are especially stigmatized for appearing to reject what some consider as their God-given male bodies." It also tells men who are not successful with women that they are not real men. And, of course, it teaches them that the only appropriate way for a man to express his emotions is with violence.

Until that changes, there will always be another Moynihan or Rodger or Sodini -- and both women and men will pay the price.