"Chandler's treatment of his gay father is appalling": Everything critics realized while watching "Friends" in 2015 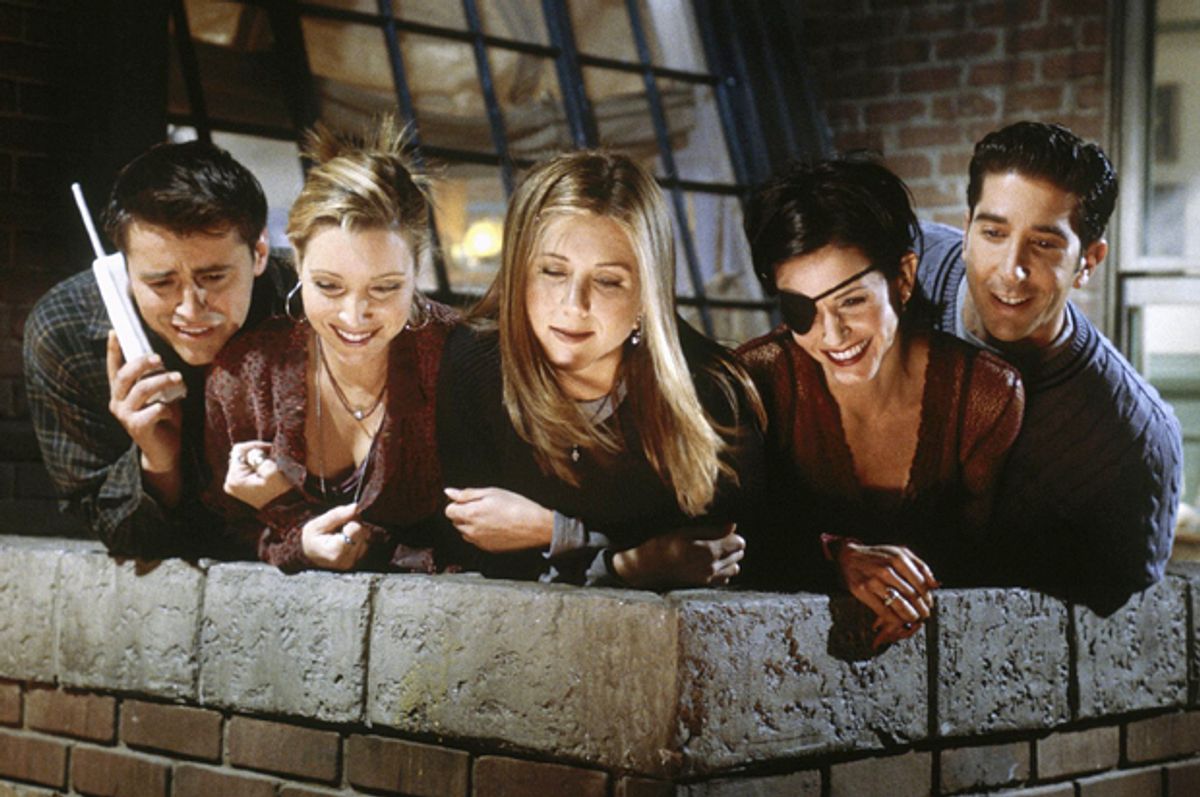 “Friends" hit Netflix for the first time in 2015, and while it’s certainly not the first time people have had the opportunity to rewatch the show since it went off the air in 2004, it has provided a handy excuse for people to ruminate belatedly on the show's impact -- and for crazy super-fans to binge-watch all 10 seasons, obviously -- and perhaps learn something new about the gang in the process. And they did! Some revelations were goofy, some light, and others pretty damning. Here’s what the Internet dug up about our favorite sitcom when viewed in the cold harsh light of 2015:

Chandler is the worst, and he’s also pretty homophobic.

As Ruth Graham wrote in Slate: "Chandler’s treatment of his gay father, a Vegas drag queen played by Kathleen Turner, is especially appalling, and it’s not clear the show knows it. It’s one thing for Chandler to recall being embarrassed as a kid, but he is actively resentful and mocking of his loving, involved father right up until his own wedding (to which his father is initially not invited!)... his continuing discomfort now reads as jarringly out of place for a supposedly hip New York thirtysomething — let alone a supposedly good person, period.... When it comes to women, Chandler turns out to be just as retrograde as Joey, but his lust comes with an undercurrent of the kind of bitter desperation that I now recognize as not only gross, but potentially menacing."

Although, this, of course, is not the first time the show’s homophobia has been addressed:

Refinery29, meanwhile, delved into the issues with the show's use of “Fat Monica” as a punchline.

"In the show's storyline, Monica loses weight in college after overhearing Chandler make fun of her size. Shamed into thinness, Fat Monica becomes just Monica — desirable and (finally) human. Monica is many things: funny, uptight, loving, competitive. Fat Monica is just fat... and always hungry. I was grateful for Fat Monica as a kid. She was proof I could overcome my disgusting plumpness and be seen as lovable, too. True, I would always bear the shame of my inflated past, just like Monica did, but I was willing to live with that if it meant I'd be a person instead of a punchline.”

The Globe and Mail's John Doyle, meanwhile, asked if nostalgia for "Friends" is all about white privilege.

"The issues of race and 'white privilege' make some Americans deeply uncomfortable. Maybe, at a time when mainstream U.S. TV is finally airing shows with ensemble casts that look like the ensemble that is America, and after the shooting of Trayvon Martin, and after the shooting and rioting in Ferguson, Mo., and all the attendant questions raised, there’s an instinctive need on the part of some to return to the bubble of white-bread America that is epitomized by 'Friends.'"

Yet while some griped about the show’s retrograde identity politics, others were able to find a feminist message.

Refinery29 picked out 21 of "Friends'" most surprising feminist moments. Meanwhile, Bustle listed the nine most feminist things about "Friends," such as:

"When Rachel got pregnant, she turned down marriage proposals from both Joey and Ross. Being married and having a family don’t necessarily have to be connected, and Rachel was the hottest single mom on network television, and everyone respected (and applauded) her decision."

In an interesting morsel of critical theory, Maggie Wheeler — aka Janice —  suggests her character is a stand-in for the viewer. As she tells EW:

“This crazy girl who is not particularly self-aware who still gets to be at the party. This interloper, this outsider managed to find her way into this little community of friends, and I think that was a vehicle for a lot of viewers who were sitting around in front of their televisions going, ‘Well, how do I hang out with those people?'”

There were also some novel discoveries on a more micro level — like the fact that the Friends intro without music is super creepy:

Perhaps the biggest revelation of all: Some geniuses at Bustle discovered the answer to the age-old question -- How was the gang always able to get a seat at Central Perk? While, as part of their comprehensive friends countdown -- which is full of gems -- Vulture reminded us that "Friends" actually invented the term "friend zone."

There was much discussion about why the Netflix episodes were shorter than the DVD episodes.

Turns out that, back in 2012, co-executive producer and director Kevin S. Bright explained that the DVDs had a few minutes of extra footage: “The deleted footage was, frankly, added specifically for one home video release,” he said. “If fans are particularly interested in additional footage, those versions are still available. But for this, we wanted something that we, the creators, felt represented the show as we always wanted it to be remembered, which is the original NBC broadcast versions, which have never before been released as that, combined with fantastic new picture and sound, a new documentary and other new features.”

Still, just remember, no matter how these revelations may make you see "Friends" in a new light, it's still okay to love the show (albeit with a grain of salt").

As Vulture’s Margaret Lyons wrote in her "Stay Tuned" TV advice column, in response to a reader expressing discomfort with the show’s homophobia: “You can still love 'Friends,' but why would you want to love it like you did before? Love it the way you see it now, with the things you know now and the values you have now. I love 'Friends,' but I do not love its body or queer politics. Those things can be true at the same time."