Lessons from "League of Legends": Why I taught my son to play violent video games

When we play these games, my son confronts nasty race and gender politics – and he's a better person because of it 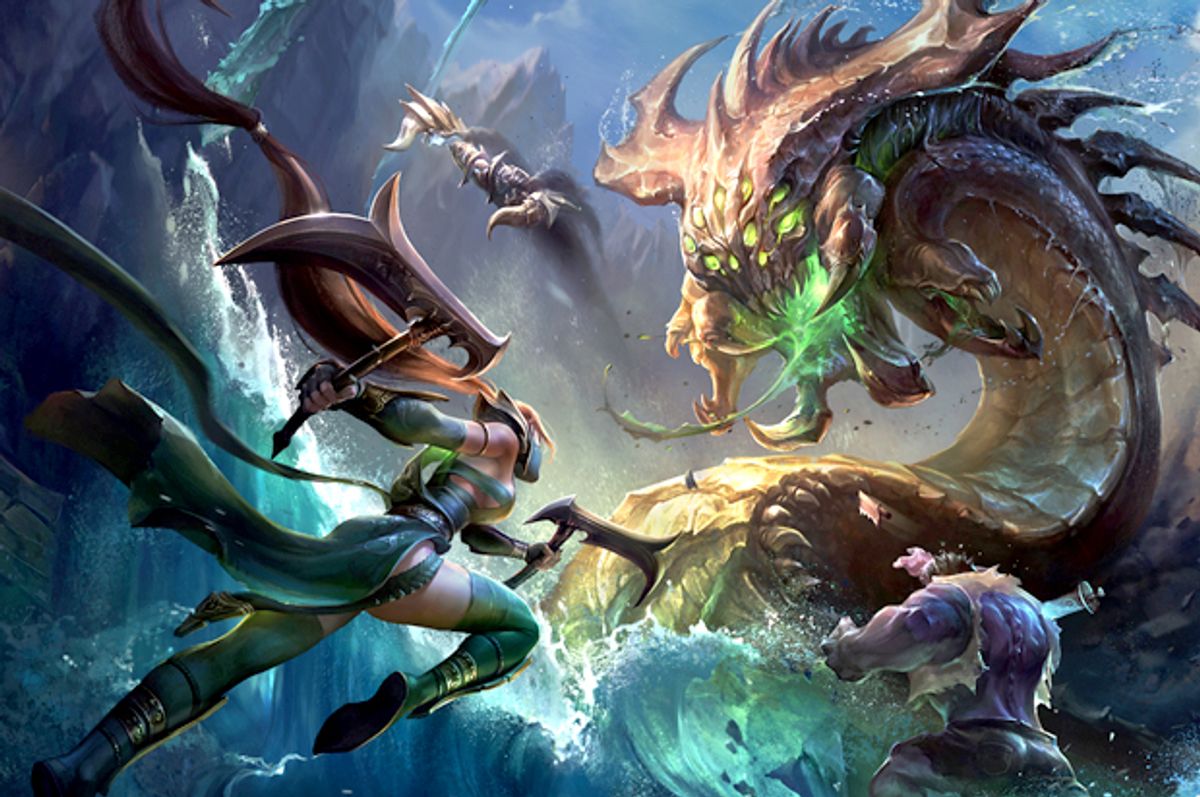 It’s Friday night. My 11-year-old son has been pinned against a crumbling stone wall by a Viking named Olaf, a wicked axe gleaming in each oversized hand. I’m heading upriver as fast as I can, slipping from bush to bush, hoping I wasn’t followed. Getting trapped here is the last thing I need.

I’m not close enough for a sure thing yet, but I take aim anyway. Olaf shakes his horned helmet and dives in, risking a hit from the turret. I snipe; only the tip of the laser beam grazes him, but between the turret and my spell that’s enough to drop him.

“Play more defensively,” I tell Ethan over voice chat. “I can’t leave my lane unattended and your dad is busy in the jungle.”

“Defense,” I tell him again.

These days, he’s just as likely to call the shots—“No, Mom, no! Don’t go over there.” He’s better at this than I am, not because of age, gender, gaming preference or some kind of intrinsic generational instinct, but because I came to the multi online battle arena late into my lifelong affair with online gaming. The first time he asked me to play "League of Legends," I shook my grizzled head and sniffed derisively, thinking, no doubt, of the numerous challenges involved in running a successful "World of Warcraft" raiding guild, or of nuanced PVP battles I’d waged on the frontier of "Dark Age of Camelot"—of evenings spent working out sequences and complicated strategies before we ever set foot in a game—or of simpler times involving "Unreal Tournament" LAN parties at the old Wizards of the Coast after hours. “That’s for kids,” I said. “Kids who like to trash talk. It’s not for me.”

But he persisted. Between them, my niece and my son got my husband playing. I gave him the same elitist arched eyebrow, made pointed comments about appropriate behavior and jokes about lowbrow gaming. Eventually I came to the realization that the days of my kid wanting me actively involved in anything are limited. I let go of snobbery.

I’ve gamed in multiple genres all my life and never been so frustrated. Extensive gaming experience seemed not to matter. I’d never been this terrible at any kind of game I’d tried—even first-person shooters, though not my favorite genre, were easy enough to figure out after a few games. But this was a different animal, combining skill, speed, reflex and strategy in a series of deceptively simple actions that proved difficult to master.

The game is complicated, dynamic and highly strategic. Each game is set on the same board, with two teams of five, and has you achieving the same objectives—defending your towers and your nexus crystal, destroying the enemy team’s towers and nexus crystal—but changes radically based on the skill level of the participants, the characters they chose to play and, ultimately, the way five strangers choose to interact with each other. With an unbelievable 27 million people worldwide playing "League of Legends" daily and an estimated 67 million playing at least once a month, "League" is something of a microcosm, a reflection of not only gaming culture but the Internet itself.  If you’re lucky, you’ll have that magical game where everyone involved acts like a pleasant stranger at a really good party: amusing, appropriately intimate, friendly. If you’re really lucky, you’ll also have a knowledgeable player or two in the match who doesn’t mind so much that you’re dying over and over—known as feeding, since your death feeds your opponent gold and kills—and who dispenses that knowledge without sarcasm or insult. About the most that you can hope for, in an average match, is that you only have one player in the game who rages when someone invariably feeds.

And more often than I’d like, you get the opposite: someone carrying a chip or ten who uses group chat as a dumping ground for every offensive thought they’ve ever had.

Allowing an 11-year-old to play a game publicly decried for epic levels of toxicity and negativity may seem like a questionable parenting choice, but Ethan inherited his father’s impenetrable thick skin and there is something to be said for controlled exposure: this kind of attitude, in gaming or in the general Internet landscape we navigate, isn’t going anywhere.

Maybe because he’s always seen girls gaming—in everything from tabletop RPGs to video games—my son has never held the ridiculous assumption that girls don’t play video games, or that they only play them to please others. Fast-paced MOBAs help emphasize gaming inclusiveness in one way: everyone plays everything. It’s hard to decipher gender in games like this unless explicitly stated. The player behind Lux the Chromatic Cheerleader with her sparkling blue eyes, blonde hair and excessively optimistic personality is just as likely to be a man. Each character has a unique set of qualities, and you can’t really afford to base your strategic decision-making on a set of nonexistent pixelated genitals, especially since your character doesn’t persist—matches only last anywhere from 20 minutes to an hour, on average.

This is not to say "League of Legends" is some sort of genderless gaming paradise. The game is plagued by the same set of problems facing all kinds of online gaming right now. Racist and sexist jokes abound in the player base, and there are additional issues to be had with the game’s overwhelmingly fair-skinned character selection, replete with ridiculously proportioned breasts and outfits of questionable utility. Still, there is appeal in a system where you slip in and out of various characters like seasonal coats, trying them on for size and allowing their abilities to dictate strategic advantage. "League" helped me show my son that limits imposed by gender are illusory—the way you look isn’t even half the package. Here, as elsewhere, mutability is strength.

In the months before I was playing, Ethan was only allowed to join a match with my adult niece Trudy, a highly ranked player who is often the best on any given team in any given lane. Skill gave her additional clout in a game should anyone start talking trash—people tend to listen when the player carrying the game tells them to shut it—and I knew he was in safe hands with her. He wasn’t allowed to turn on All chat, the chat channel bridging both teams, and Trudy took care of team chat.

But naturally, the inevitable insults about sexuality, gender and skill came up, even if they were locked down fast, and he saw them.

Last fall, on one of those chilled, golden days that turn the corner from summer to autumn in one moment, my son crashed into the house, hands locked around a pair of dog leashes.

“Those guys were in the field,” he said.

I chopped carrots, sliding half-moons from one side of the board to the other, and waited.

“They were calling Paul and Victor gay over and over for wanting to be on the same football team.”

Fall blew through the door, leaves skittering across the hardwood. I sliced into an onion and said, “What did you do?”

“I said, ‘Gay isn’t even bad,’ but they didn’t hear me.” He unclipped the leashes, twilight throwing shadows from the open door. He was a master of the in-between: half child, half man, halfway grown. The lines of his broadening shoulders clashed with the curve of baby fat hugging his face.

I suppressed the urge to knock on doors, to find mothers. “What then?”

“Their leader—he’s in seventh grade—he got in my face. He said, “I know you didn’t just say that to me.” His hands reached outward, shoved downward into pockets. “I stared right at him and said ‘Yeah, I did.’ He just walked away laughing like I didn’t say anything.”

“That almost always happens with bullies, son,” I say. “Good job being a friend.” My heart ached, the way it does when my children do something exactly right.

Like most parents, I’ve tried to instill a sense of empathy and personal accountability. I’d love to think my son stood up for his friends because a vision of his mother appeared, mouthing the words “Bullies are bad! Gay is okay!” so I could grab that Achievement Unlocked: Parenting Gold Star.

I know better, though.

Gaming is community, and community informs.

In the wake of Gamergate, curating our collective spaces seems more important than ever. How else will our sons and daughters learn that this is everyone’s house? Let them learn to speak up for the kid getting bullied, even if they really are, like, the worst ever; help them understand that taking the bait feeds the trolls; allow them to witness the way kindness gets you farther than incendiary jokes, in this as in every platform.

And let them learn that, ultimately, sometimes the most potent trash talk is the simplest—a deafening silence they can hear over your kill/death ratio and punctuated, at most, with a simple, screw-you winky ;)