The right's Reaganomics trap: How it distorted "populism" -- and the left went along

Pushing tax cuts for the masses instead of cuts for the rich isn't "progressive" — it's left-Reaganism. Here's why 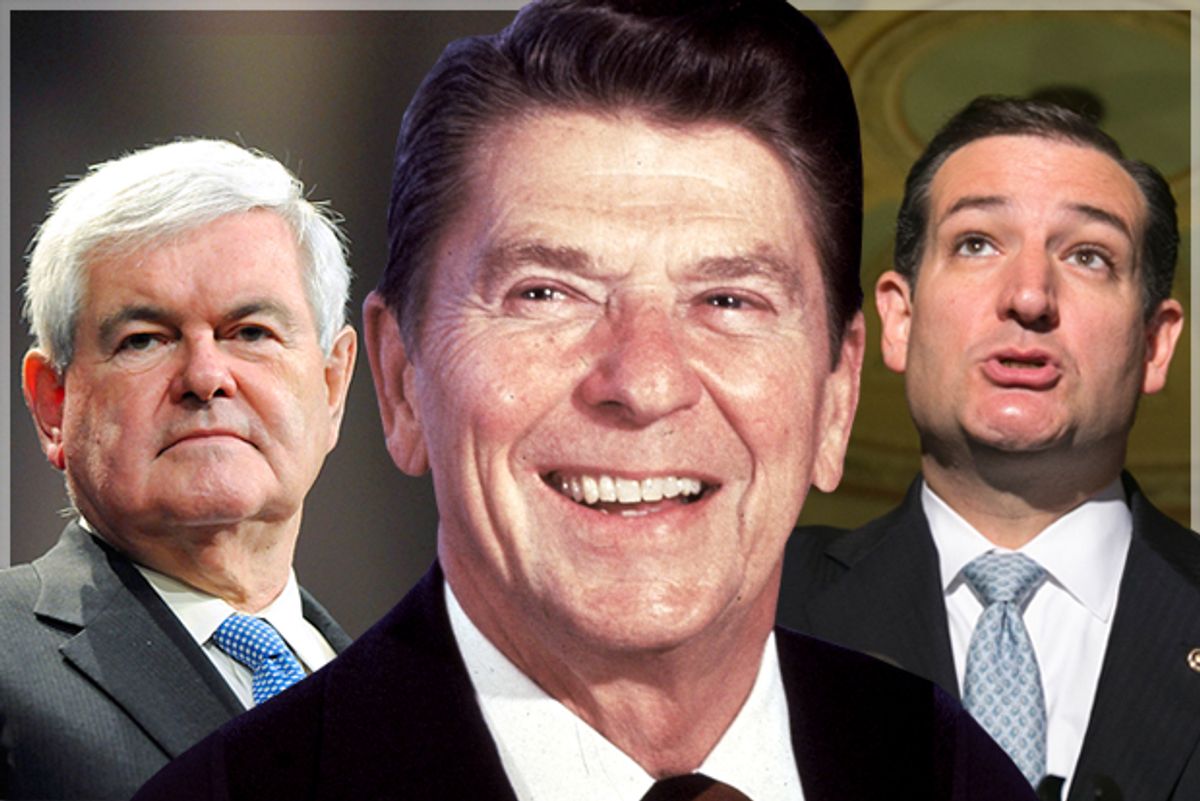 President Obama’s proposals to help the middle class in his State of the Union message, like the recent tax proposals offered by Rep. Chris Van Hollen, are being hailed by progressives and denounced by conservatives as marking a dramatic turn toward “populism” by the Democratic Party.  They are nothing of the kind. On the contrary, they show the extent to which even “populist” and “progressive” Democrats remain trapped inside the intellectual cage of Reaganomics.

Reaganomics is tax-cut Keynesianism for the classes. Cut the taxes of the rich, the theory goes, and prosperity will trickle down to the masses, as the rich invest in economy-expanding businesses and pay higher taxes, in absolute terms, at lower rates.

The Democratic answer to this is tax-cut Keynesianism for the masses. Cut the taxes of middle-class and working-class Americans, and this will at once expand the middle class and bolster aggregate consumer demand, to the benefit of mass-market industries. The revenue lost by middle-income tax cuts will be made up by higher taxes on the rich, who are more likely to save their money or gamble with it than to spend it.

Because of its emphasis on the demand side, the Democratic version of tax-cut Keynesianism is more plausible than the Republican version when it comes to macroeconomics. But in its approach to public policy, it is essentially left-Reaganism. It represents a continuity with the neoliberalism or “Rubinomics” of the Clinton administration (named after Clinton’s Treasury Secretary Robert Rubin), symbolized by proposals for little, gimmicky tax cuts, to the exclusion of direct interventions in labor and product markets or expansions of social insurance. And it represents a break with the New Deal economics that created the first mass middle class in history in mid-twentieth century America.

The New Dealers did not create a mass middle class by tinkering at the margins with the tax code for short-term electoral gain, treating “the middle class” as one of many narrowly targeted constituencies. The New Deal-era architects of middle-class America boldly used all the tools in the arsenal of the modern mixed economy: labor market regulation, social insurance, public utility regulation and state capitalism.

Labor market regulation. The Fair Labor Standards Act of 1938 created the federal minimum wage and enacted maximum hours and overtime regulations. Limited immigration—a labor market policy that the New Deal Democrats inherited from the 1920s and supported until the 1960s—ensured a tight labor market at the bottom of the income scale. The combination raised wages between the 1940s and the 1970s, even after Southern and Western conservatives managed to thwart drives toward nationwide unionization.

Universal, tax-funded social insurance is far more efficient than 300 million pre-funded private savings accounts. Social insurance means you don’t have to pre-fund your retirement and your episodes of unemployment and disability and family leave. You pay modest, recurrent social insurance taxes, such as payroll taxes, instead of amassing huge piles of cash or stocks and bonds. In the same way, thanks to private insurance, you pay monthly premiums, instead of frantically saving hundreds of thousands of dollars in advance so you will be prepared if your house burns down or your car is wrecked. And unlike pre-funded savings accounts, social insurance programs like Social Security and Medicare provide the same benefits, no matter whether the stock market is up or down when you need them.

Public utility regulation. The New Dealers understood that certain industries provide “merit goods”—goods that we want everyone citizen to have, even if they cannot afford to purchase them in the private market. In the New Deal era, these merit goods included basic food, water and electricity, telephone service and banking.

The New Dealers also understood that the methods by which these merit goods should be provided to all citizens depends on the structures of particular merit-good industries. Where there are competitive markets—for example, in the food industry—vouchers (food stamps) can be provided to the needy, without any danger of driving up the cost of the merit good. However, where a merit-good industry is a natural oligopoly or monopoly, like water or sewer service, subsidies in the form of vouchers or tax credits are likely to be captured by greedy providers, who will jack up their prices by the amount of the subsidies.

To avoid such predatory pricing, merit-good industries with monopoly/oligopoly structure should be price-regulated utilities under public or private ownership. In the New Deal era, public utility regulation was extended to electricity and water service, telephone service (the regulated AT&T monopoly, in which the rich and business cross-subsidized middle-class phone use), and the tightly regulated banking industry.

The greatest mistake of the Great Society legislation of the 1960s was expanding federal subsidies to health care and higher education, without at the same time converting higher education and medicine into price-regulated public utilities. The predictable result was an explosion of college costs and medical costs, as predatory providers used the market power of their concentrated industries to extract rents or excess payments from taxpayers and private purchasers alike. No similar cost explosions occurred in countries that controlled higher education prices as well as the prices that can be charged by drug companies, hospitals and physicians.

In other words, unlike New Deal utility regulation, the Great Society reforms of the 1960s--student loans, Medicare and Medicaid--inadvertently encouraged price-gouging by greedy universities, drug companies, hospitals and physicians, not by being too statist, but by not being statist enough.

State capitalism. The New Dealers believed that the correct term for modern economies was “the mixed economy,” not “capitalism.” In reality, there are no “free market” or “free enterprise” or purely “capitalist” economies in the world. Even in relatively anti-statist countries like the U.S. and the U.K., the economy is a blend of capitalism, socialism and the nonprofit sector. There are no libertarian countries.

The tech revolution of the late twentieth century was the result of investment not only by the private sector but also the public sector (chiefly the Defense Department) and the nonprofit sector (research universities like MIT and Stanford), with the public sector acting as the chief catalyst.  In the case of breakthrough innovations like the transistor and the satellite and nuclear energy, private venture capitalists have been supporting actors, not stars.

Merely rehearsing this history shows how pitifully timid the range of proposals made by today’s Democrats have become. President Franklin Roosevelt would be as forgotten today as President Franklin Pierce, if his chief response to the crisis of the Great Depression and the second industrial revolution had been a laundry list of minor tax credits.

What would a bold neo-Rooseveltian agenda look like today? Making the minimum wage a living wage—a labor market regulation favored by President Obama and a growing number of Democrats—would be one step. So would an immigration policy that creates a tight labor market at the bottom by bringing in mostly educated workers while restricting the number of low-wage, less-educated workers. (If Latino immigrants voted overwhelmingly for conservative Republicans, one suspects that Democratic immigration policy might be different). Then there is social insurance. Trying to expand tax-favored private retirement savings for middle- and low-income Americans, as the Van Hollen plan does, is a terrible idea, for reasons of policy and politics.

It is bad policy, because it would herd more middle-class and low-income Americans like sheep into the stock market, to be fleeced by Wall Street money managers using the shears of hidden and excessive fees.

And it is bad politics, too, because universalizing private retirement savings accounts will give Republicans and centrist Democrats yet another excuse to cut Social Security in the future.

The more efficient and popular policy when it comes to retirement would be to simply expand Social Security and tax the rich to pay for the expansion. This proposal is overwhelmingly popular with voters, if not with the One Percent donor class that funds both parties. According to a 2014 poll by Lake Research Partners, “support for having wealthy Americans pay the same Social Security rate as everyone else in order to cover the cost of an increase in Social Security benefits is strong among both Republicans and Democrats. More than seven out of 10 Republicans support this proposal (73 percent). Nine out of 10 Democrats (90 percent) support it.”

Public utility regulation? As I have noted already, the higher education and health care industries in America are antisocial, predatory monopolies and oligopolies, quite as parasitic in their own ways as the worst offenders on Wall Street. These price-gouging industries need to be reined in either by public options or price regulation.

In the case of higher education, President Obama’s plan to provide two years of free community college might simply lead to tuition price hikes if it is not accompanied by tuition price controls.

The Affordable Care Act has expanded health insurance coverage, but has not addressed the main problem. Even if American medical prices don’t grow faster than the economy in the future, they are already far higher than medical prices in comparable countries. For example, as Vox notes, Nexium for heartburn costs $23 in the Netherlands and $215 in the U.S.

The U.S. thus needs to go beyond merely containing future health care cost increases in order to cut many American medical prices down to European, Canadian and Japanese levels. All-payer price regulation—that is, medical price controls imposed by government--is the system used by every other developed country, including small-government, free-market-oriented countries like Switzerland, to restrain predatory pricing by greedy pharma companies, greedy hospitals and greedy physicians. Higher education and medicine do not have to be provided by government, but they should be turned into low-profit, price-regulated public utilities.

In the area of state capitalism, there is already a surprising degree of bipartisan consensus. The business wing of the Republican party agrees with centrist and progressive Democrats that the private sector would benefit from increased public investment in basic R&D and infrastructure—where possible, by means that leverage private capital, like infrastructure banks. The opposition to productivity-enhancing public investment is limited to libertarian ideologues and neo-Confederate localists on the far right.

Not only would neo-Rooseveltism be more efficient than a timid, slightly-more-liberal version of Reaganomics, it would also be more popular with voters. As David Frum observes: “Democrats embarrass Republicans when they champion benefits that Americans regard as earned: Social Security and Medicare above all. Minimum wage increases? Super-popular.”

Modest, complicated tax credits? Not so much.