Where did all the sardines go?

Pacific sardines are suffering their worst population crash in decades, and the fallout could be catastrophic 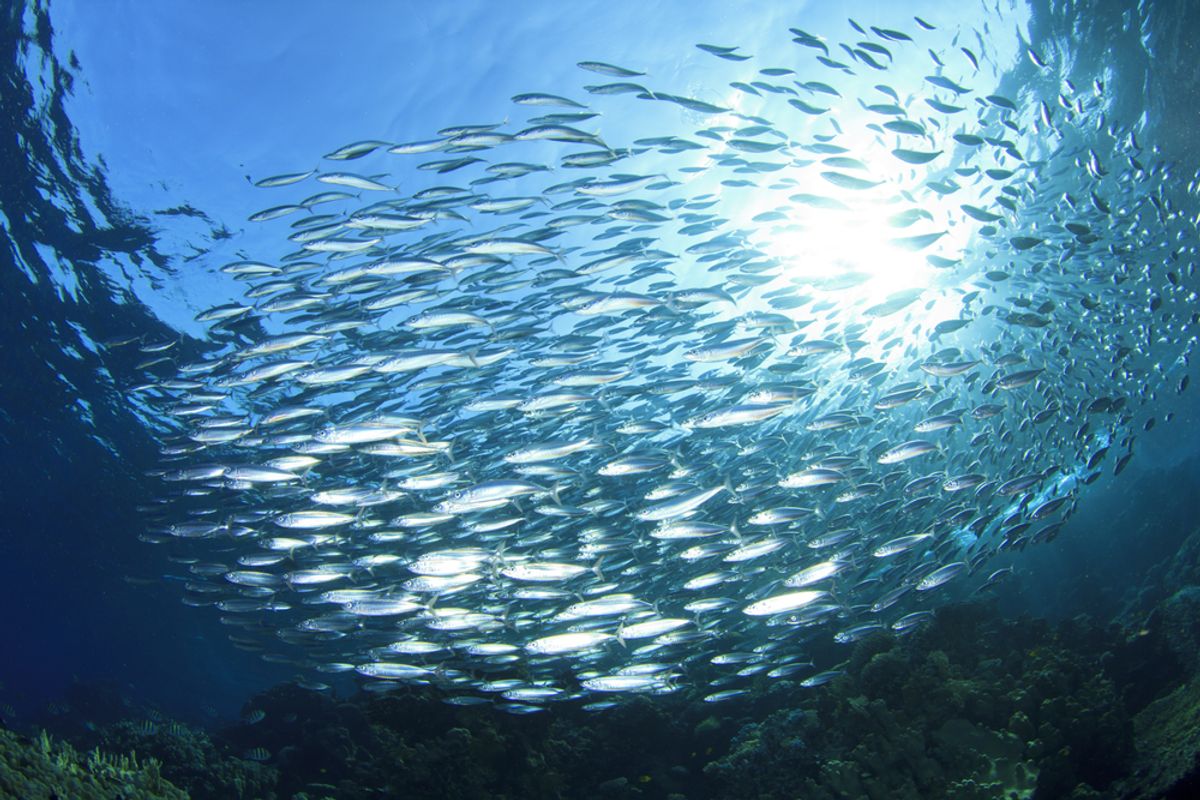 The Galapagos archipelago, a breathtakingly beautiful cluster of 19 islands and more than 100 rocks and islets off the coast of mainland Ecuador, was designated a United Nations World Heritage site in 1978. It is home to thousands of animal species that live in, or depend on, the sea. One of the most beloved is the blue-footed booby, known for its brilliant colors and penchant for elaborate dance. Now it appears that the Galapagos may lose its most iconic species. In April 2014, a team of researchers from Wake Forest University announced that blue-footed boobies had nearly stopped breeding, putting the survival of the species in grave danger.

Researchers from University of California reported similar findings about another shorebird 2,000 miles from Galapagos. While conducting a survey of Mexico’s Natural Protected Areas, they discovered that the endangered California brown pelican was largely absent from its primary nesting grounds. Like the boobies, they had nearly stopped breeding. Meanwhile, marine scientists from NOAA had been studying the unprecedented illness of thousands of sea lions on California coastlines.

Are marine animals experiencing a streak of mysterious bad luck? Perhaps. But perhaps it’s not as mysterious as it may seem. Blue-footed boobies, California brown pelicans, sea lions, and a number of other species have something in common: Their natural diet is comprised largely of Pacific sardines, which have suffered the worst population crash since the mid-1900s, leading scientists to posit that the sardine crash may be having widespread impacts on local and migratory species dependent on the Pacific Ocean.

Where did all the sardines go?

In 1948, this question was posed to ocean biologist Ed Rickett, who was investigating the most famous sardine crash in history, which began in 1946. He responded, “They’re in cans!” Today’s scientists don’t think the answer is so simple, as sardine populations are known for following a boom-and-bust cycle. However, they don’t deny that rampant fishing played a significant role in the mid-century crash, and have found that cool water temperatures triggered a natural decline in the 1940s, which was greatly exacerbated by overfishing. It would take four decades for the population to recover from that crash.

By the late 1980s, sardines had enjoyed a spectacular comeback. For two decades, populations remained stable, with normal cycles of decline and increase. Sardine biomass (a measurement of total adult sardine stock, used by the Pacific Fishery Management Council in calculating catch limits) peaked in 2006-2007. It then began dropping gradually, about 8 to 14 percent every year — until 2011. A mild La Niña weather system developed in late 2010 through early 2011, and returned from late 2011 into 2012, lowering ocean temperatures and creating ocean conditions reminiscent of those the 1940s. In a single year, sardine biomass decreased by 30 percent, from 680,004 metric tons at the beginning of 2011 to 473,374 metric tons at the beginning of 2012.

Before the effects of La Niña event fully developed, scientists had already been warning of trouble. A study conducted in 2011 concluded, “Imminent collapse is likely.” Researchers pointed to unsustainable fishing practices, including high catch limits and a worrisome focus on catching older, breeding-age fish. Yet the sardine fishing quota in the Pacific continued to increase. In 2011, the fishery catch was 10.59 percent of the total biomass. In 2012, that number grew significantly, with a total catch of 18.4 percent of the total biomass. Between 2012 and 2013, the sardine population once again dropped about 30 percent, to a mere 333,268 metric tons by the beginning of 2013. This drop is considered the second great sardine crash, and has been compared to the first notorious crash of the late 1940s and 1950s.

In late 2013, federal fishery managers took heed of the downward trend, setting 2014 catch levels 33 percent below what they would have been under the previous management plan. The most recent formal Stock Assessment Review, conducted in March 2014, projected a slight increase in sardines between 2014 and 2015. However, scientists remain worried, and the 2014 projections have yet to be proven. According to a November 2014 Oceana press release, the Pacific sardine biomass is at the lowest level in two decades, with no clear signs of recovery. Yet the Pacific Fishery Management Council voted to increase the harvest rate by 33 percent, a move that Oceana’s Pacific project manager and senior scientist Ben Enticknap called, “a blow to long-term sustainable fishery management.”

When there is a crash, fallout is inevitable

No species or ecosystem exists independently. The collapse of a single population can have direct and indirect impacts on other species for generations to come. This is certainly true of sardines, which are forage fish and represent a significant food source for dozens of species, including, whales, sharks, rays, seabirds, salmon, tuna, and many more. They serve a vital function in the ecosystem, transferring energy from plankton to higher-level predators.

What happens when the sardines disappear? Surprisingly, in 2014 many coastal areas saw an influx of marine life such as whales, due to an anchovy boom. However, alternative food sources may not be as readily available in coming years, leaving the same species that thrived in 2014 with a serious food shortage. Some populations of predators are already feeling the effects of the sardine crash, including the California brown pelican and sea lions mentioned above. NOAA determined that the sardine crash was likely responsible for 1,600 malnourished sea lion pups in California in 2013 Mothers were found to be feeding on less nutritious but more abundant prey and producing inadequate milk. Research has also indicated the crash has been hard on animal populations, and may have contributed to a lack of mating among certain seabirds.

The boom-and-bust cycle of forage fish can span decades, with crashes often worsened and lengthened by fishing practices. Therefore, species dependent on sardines likely face many seasons of scarce food availability in the future. Most will likely survive, but recovery will be a slow, difficult process. Every year of failed breeding leaves a smaller and older population to begin the next mating season.

For the blue-footed booby of the Galapagos, recovery may not come. An in-depth study published in Avian Conservation and Ecology suggests that the Galapagos population of these birds is especially susceptible to sardine availability, because it lacks nutritionally equivalent alternatives. Three decades ago, the colorful birds were abundant, thriving on a diet almost entirely composed of sardines. But the southern Pacific waters, which lie a bit south of the Pacific population managed by the Pacific Fishery Management Council, have also experienced a sharp decline in sardines, which seems to correspond with the rapidly dwindling population of blue-footed boobies.

It is important to note that researchers did not draw definitive conclusions from the Galapagos study. Like most areas of environmental science, unknowns remain. Researchers could not completely rule out the possibility of disease or weather conditions as causes in altered breeding behavior.

Is the pacific sardine sill in peril? Are regional and international agencies doing enough to stabilize populations? How big of an impact does fishing have on boom-and-bust cycles of forage fish? There is a general consensus that water temperature patterns drive the cycle, and fishing can exacerbate low points. However, the significance of industrial fishing and the best practices for sustainability remain subjects of great disagreement.

It is impossible to know what the future will bring for global sardine populations or the species that depend on them. Despite heavy criticism of the Pacific Fishery Management Council policies, many consider the Pacific sardine well managed in comparison to other sardine populations. Sardines off the coasts of Chile, Peru, and Japan have been exploited much more heavily, according to NOAA. Even fisheries that have earned Marine Stewardship Council approval for sustainability are suspect, as activists have raised concerns about the organization’s credibility in recent years. Furthermore, fishery management only applies to legal fishing operations — the impact of illegal fishing cannot be measured as precisely.

Though we often hear that the oceans are dying, increased awareness, outspoken support, and action from grassroots activists to politicians, just might be lifesaving.