5 of Sarah Palin's most insane and incoherent moments

This weekend's scatter-brained speech in Iowa was hardly an anomaly 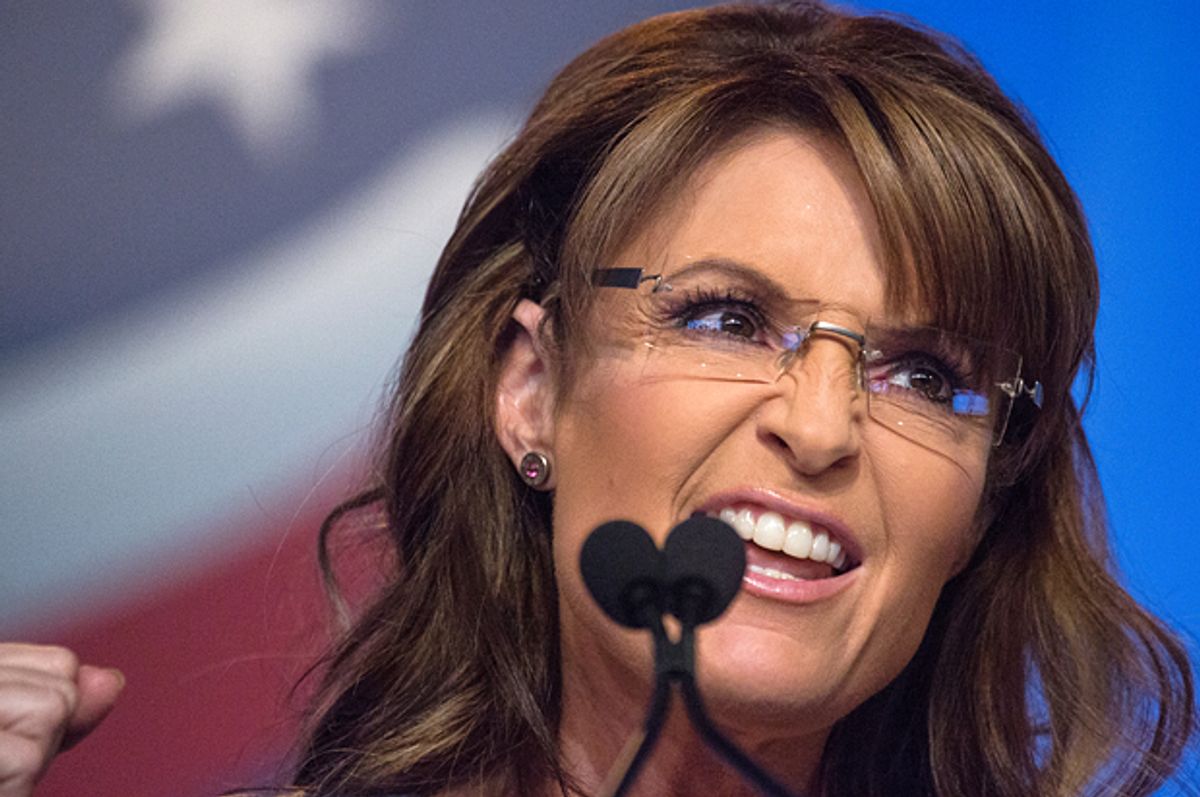 Over the weekend, the host of the Sportsman Channel's "Amazing America" pronounced herself  "seriously interested" in a 2016 presidential bid. That's right: despite flopping as the Republican Party's 2008 vice presidential nominee, resigning the Alaska governorship half-way into her single term, passing on a 2012 White House run, and showing considerably more interest in parlaying her celebrity into lucrative media deals than in reentering the political arena, Sarah Palin told a group of reporters on the sidelines of Congressman Steve King's Iowa Freedom Summit that they could "absolutely say" she harbors serious interest in a political comeback; this came a day after Palin spoke to ABC News of how her "servant's heart" naturally inclined her toward an interest in the White House.

Sarah Palin will not run for president, of course, but her relatively young age (she's 50) ensures that we'll be treated to breathless speculation about her political plans at least through the 2040 presidential cycle. We can also safely bet that the woman who was almost a septuagenarian's heartbeat away from the presidency will continue to serve up rhetorical red meat for the legions of Tea Party fans she's amassed over the course of her six years in the national spotlight. Her celebrity status often leads to public appearances marked by incoherent rambling, puzzling analogies, and just-plain cringeworthy comments.

Take Palin's Iowa stemwinder this weekend, which critics both right and left panned as bizarre and nonsensical. The speech ranged from Palin's plans for how the Republicans could oust the Democrats from the White House in 2016 (spoiler alert: Call Democrats the real racists and sexists!) to her opposition to big government, that bane of the Tea Party movement.

A representative portion concerned Palin's thoughts on big government, "the man," and the importance of strengthening one's back so "the man can't ride ya":

It was precisely the sort of aggrieved, quasi-populist, and scatterbrained performance we've come to expect from the Thrilla from Wasilla. Below, Salon looks at some of the other moments that have captured the essence of Palin's brief public career:

Since leaving public office, Palin has gotten into the habit of posting her thoughts on just about anything that crosses her mind from her Alaskan redoubt. Last year, as the televangelist Billy Graham marked his 96th birthday, Palin posted a meandering six-minute tribute that could only have strengthened one's faith -- if only out of deep gratitude to the Almighty that this woman never became vice president. You'll particularly relish her memory of Graham's 95th birthday, which brought together "the most diverse audience you’ll have ever heard of — I mean here there’s Donald Trump is there; little hockey wife from Wasilla, hockey mom is there; Mr. Murdoch, you know, Fox guy; a lotta big wigs were there."

The effort to raise fast wood workers' pay to a living wage faces formidable political and business obstacles, even with progressive champions like Elizabeth Warren backing the campaign. Palin, you'll be shocked to learn, sides against the workers, offering this profound response to Warren's position:

"In what respect, Charlie?"

It may be hard to remember now, but John McCain's selection of Palin as his 2008 running mate briefly struck fear in the heart of many Democrats, who worried that the political neophyte mother of five could appeal to many disaffected women supporters of Hillary Clinton. Once Palin opened her mouth, those fears ebbed. Take the moment she flubbed a major foreign policy question in her first national interview, with ABC's Charles Gibson:

Matters only worsened for the McCain-Palin campaign when it became clear that the global financial system was in freefall, prompting policymakers to bail out troubled financial institutions. When CBS News' Katie Couric asked Palin for her take on the bailouts, the GOP's number-two candidate delivered a wide-ranging response on health care, job creation, and tax relief, offering little idea what she made of the financial rescue package being debated:

Just as your reward for making it through this post, here's a video of Sarah Palin having a bucket of ice water dumped on her head: