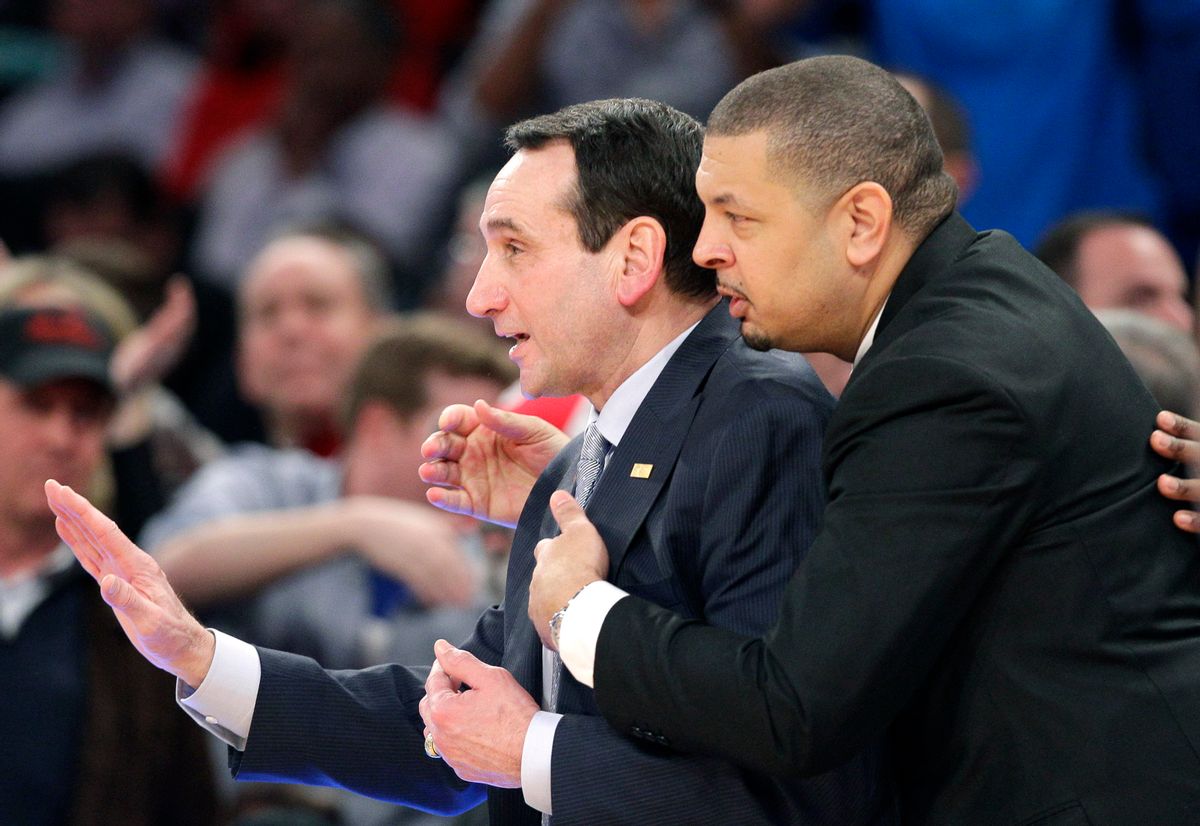 NEW YORK (AP) — Make no mistake: Mike Krzyzewski is proud of his 1,000 wins. Just don't expect him to keep chasing milestones much longer.

Krzyzewski became the first NCAA Division I men's coach to get 1,000 wins when No. 5 Duke surged past St. John's late in the second half Sunday for a 77-68 victory at Madison Square Garden.

Tyus Jones scored 22 points and the Blue Devils (17-2) went on an 18-2 run down the stretch to put Coach K in four figures on his first try.

Krzyzewski shared the moment with his family, pointing out that two of his three daughters and seven of his nine grandchildren were in attendance as he spoke in the postgame interview room.

But he could do without all the recent hoopla and individual adulation.

"I'm glad it's over," Krzyzewski said. "There have been so many articles written. There were things written that I didn't even know about me.

"Now, no more stories about my past or whatever," he pleaded. "Enough is enough."

Jahlil Okafor had 17 points and 10 rebounds, combining with Jones and Quinn Cook (17 points) to fuel the decisive spurt after Duke trailed by 10 with 8:15 remaining.

That's when the Blue Devils finally began to look like a Krzyzewski-coached team, picking up their defense and hustling to loose balls as he urged them on from one knee in front of the bench. Duke outworked the Red Storm (13-6) on the glass and held them without a field goal for 6 pivotal minutes.

"It just, boom! It was great," Krzyzewski said. "It was beautiful, really, to see them fight today and win."

When the final horn sounded, Blue Devils players engulfed Krzyzewski and he received a bear hug from top assistant Jeff Capel. Photographers swarmed the coach on the court, and players were given T-shirts that read "1,000 Wins And Kounting."

"It's a great feeling. Winning in the fashion that we did for Coach's big game, it's really special," junior guard Rasheed Sulaimon said.

A public-address announcement offered congratulations to Krzyzewski, and Duke fans at a packed Garden chanted his name.

"I'm not sure I've ever been a part of a game like that. That's kind of nuts, huh?" Krzyzewski said. "It just seemed like three different games."

Here are some things to know about Krzyzewski's milestone win:

NEW YORK, NEW YORK: No. 1,000 came about 500 miles from the cramped and cozy confines of Cameron Indoor Stadium, but Coach K was hardly on unfamiliar soil. Madison Square Garden, after all, was where he notched victory No. 903 against Michigan State in November 2011, breaking the Division I record previously held by his college coach and mentor, Bob Knight. "To win the 1,000th here, you need to be a lucky guy. I like my place, Cameron, but this is a magical place," Krzyzewski said.

PRIME TICKET: The vocal crowd of 19,812, mixed with fans of both schools, included about 15-20 former Duke players as well as Carmelo Anthony and Phil Jackson from the New York Knicks; St. John's greats Chris Mullin, Lou Carnesecca and Felipe Lopez; and Nike boss Phil Knight. Around 30 minutes before the opening tip, rising ticket prices ranged from $225 to $888 on stubhub.com — which also covered admission to the doubleheader finale between Iona and Niagara at "The World's Most Famous Arena."

EARLY STRUGGLES: Midway through an entertaining first half, Krzyzewski was on his feet as St. John's erased an 11-point deficit. Wearing a blue suit and white sneakers to support Coaches vs. Cancer, Krzyzewski stalked after the officials at the end of the half to argue that D'Angelo Harrison's buzzer-beating 3-pointer came after the shot clock expired. Coach K didn't get the call, and the Red Storm went into the locker room leading 43-39. "At halftime I sent a text out to destroy all the books on leadership, because it wasn't working," Krzyzewski joked.

BY THE NUMBERS: Duke is 26-8 at Madison Square Garden under Krzyzewski, including 18 wins in its past 21 games. ... Syracuse coach Jim Boeheim is second on the Division I men's list with 962 wins. Ex-Tennessee coach Pat Summitt holds the women's Division I record with 1,098 victories.

WHAT'S NEXT?: Two tough road tests for Duke in the Atlantic Coast Conference — at No. 8 Notre Dame on Wednesday night, followed by a trip to No. 2 Virginia on Saturday. Krzyzewski has 421 wins in ACC regular-season and tournament play. He needs two to pass old rival and North Carolina great Dean Smith for the most in league history.