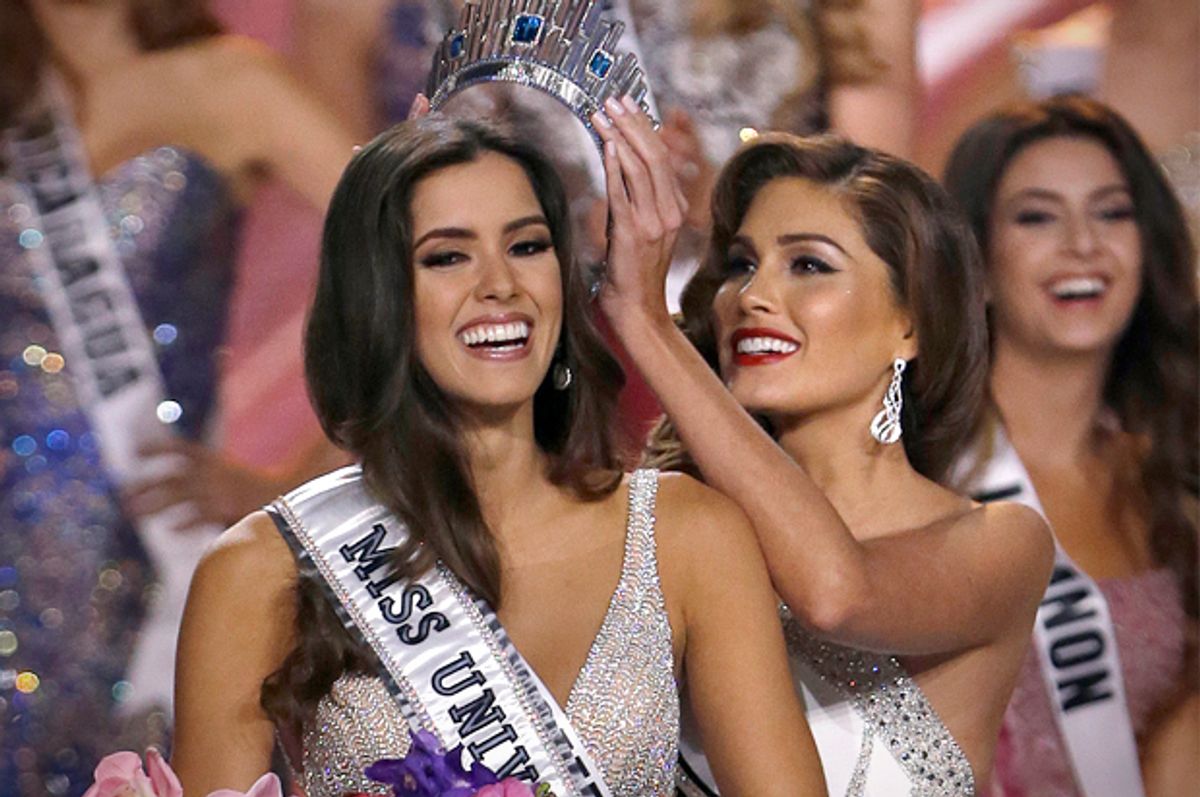 The moment the audience sees onstage is just the culmination of a very long journey. Especially on a night like last night, when the telecast nearly ran over their allotted time, three hours of meandering infomercial and stilted pageant ritual ended with just a few minutes of actual crowning. Paulina Vega, Miss Colombia, became the 63rd Miss Universe, over first runner-up Nia Sanchez, better known as Miss USA, and 90 seconds later, the telecast was over. All that buildup yielded something terribly anticlimactic.

And not just because of poor time management. Television brings a lot of strange customs to our living rooms, but whether it’s “Duck Dynasty” or the World Cup, the producers of the show find a way to get the audience invested. Maybe it’s creating “personalities” out of the people involved, as with so much of reality television; maybe it’s about sharing the minutiae of how to win the game, as with so many Olympic sports.

The Miss Universe pageant has 88 contestants, an opaque judging process, and just one night of primetime. It can’t produce personalities with weeks of programming, like “The Bachelor” does; it definitely can’t produce 88 personalities, period. And if only because seeing the actual number ratings of the contestants in their bikinis scroll across the screen would be too inhumane, even for this competition, the Miss Universe pageant can’t rely on game-driven engagement, either.

Which means that it’s very difficult to imagine being crowned Miss Universe; despite a solid three hours of live television around the event, by the time the winner is announced, we don’t know anything about her—neither who she is, as a person, or what about her was deemed meritorious by the judges. You could conduct the Miss Universe pageant with 88 Barbie dolls on your living room floor and the level of investment, if not the production values, would be essentially identical. (Oh, Miss Nigeria won the Miss Congeniality award? How wonderful for a person the audience has never heard speak!)

What does it take to be Miss Universe? Female gender identity; stilettos; a dazzling smile; and a ruthless sense of perfection, either carried by yourself or by the person who manages you. Plausible virginity. An ability to respond to serious-sounding questions with glittering generalities. And either questionable fashion sense that tends towards sequins, or a studied tolerance of that same fashion sense, when you are unavoidably maneuvered into a feathery costume or a neon bikini. Honestly, when you have been winning pageants for as long as you can remember, perhaps putting up with something and being something aren’t that different.

There is nothing about this pageant that isn’t disturbing and strange. Beauty pageants make women into objects and then reward she who can be the best object; this is still a competition with a swimsuit competition. The judges are just this side of random—perhaps it would make more sense for former Miss Universes to judge, but instead, a collection of C-list celebrities do the deed. Last night, boxer Manny Paciquao, football player DeSean Jackson, and reality stars/fashionistas Lisa Vanderpump, Kristin Cavallari, and Nina Garcia served on the tribunal. (Paciquao asked about terrorism. Vanderpump asked how the contestants would feel if the swimsuit portion of the pageant was abolished.)

And lest any hint of legitimacy taint the proceedings, Miss Universe is an entity now owned by Donald Trump, who brings all the elegance and class that you might expect from his gentle touch. In last night’s broadcast, the competition was mostly sidelined in favor of product placement: hair products, shoes, the dress designer, the swimsuit brand, the skincare line, the hotel, the convention center, even the suburban town of Doral, Florida, where the show took place. According to Trump and the rest of the video, Doral, in Greater Miami, is an up-and-coming vibrant little city, great for young people and prospective retirees alike. Come visit: maybe even move! In a few years, mixed-use spaces will be available for living, working, and shopping—and you’ll never guess who’s funding them!

The unwieldy title comes with unwieldy props: A crown and a bouquet, forcibly bestowed upon the winner, not necessarily in that order. Because the hosts insist on a modicum of performed sisterhood, the winner is clutching the hands of someone who was her competitor just a second ago and is now a loser—the first runner-up. She is the first to congratulate the newly minted Miss Universe, wrapping her in a quick, jangly hug. Then the crown is placed on Miss Universe’s head—overlooking her involved hairstyle, whether that’s an updo or carefully casual loose waves. The bunch of hothouse flowers is thrust in her hand. And then she is encouraged to do some parading. High heels, a floor-length gown, a bouquet, and a crown—not an easy combination to balance.

Last night, none of the contestants stumbled in a pratfall a la Sandra Bullock in “Miss Congeniality”—Miss Jamaica, Kaci Fennell, experienced the slightest of hiccups as she took Gavin DeGraw’s arm near the end of the performance. I couldn’t help thinking that’s why Fennell ended up as the contest’s fourth-runner up—the “loser” of the top five women. You only get the crown if you do everything right. This is what we know: Miss Universe never makes mistakes.