SAG Awards: "Orange Is the New Black" cast award is a big win for women 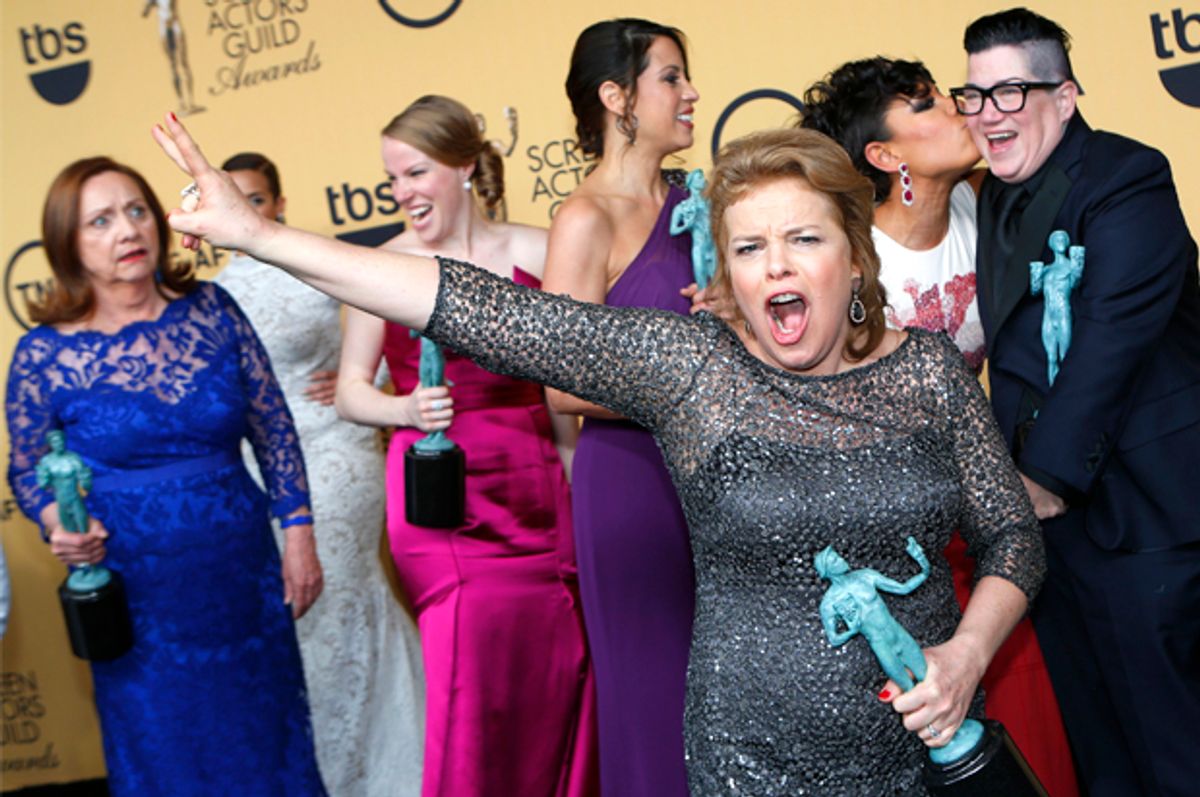 The cast of "Orange Is the New Black" backstage at the 21st annual Screen Actors Guild Awards, January 25, 2015. (Reuters/Mike Blake)
--

Women made Screen Actors Guild Awards history last night when Viola Davis and Uzo Aduba won the lead actress awards for television drama and comedy, respectively, marking the first year both lead TV actress awards were won by African American artists. Aduba’s win for her portrayal of vulnerable and volatile Suzanne “Crazy-Eyes” Warren on Netflix’s “Orange Is the New Black” became especially sweet when the entire cast of the show won Outstanding Ensemble in a Comedy Series, too.

And what an ensemble it is. The parade of women streaming up the stage to accept their awards—glammed up for the red carpet, a far cry from their on-screen, sweat-suited,  Sharpie-eyelined and contraband-lipsticked prison inmate characters—provides the best visual evidence for the show’s necessary relevance.

The characters of “Orange Is the New Black” span not only racial, ethnic and class backgrounds, but generations, too. What a rare thing it is to see a show devoted almost purely to womens’ stories, and to such a wide range, to boot. Affluent, white, first-time offender Piper might be the vehicle that brought viewers into Litchfield Penitentiary, but the histories and survival of her fellow inmates, a wide array of three-dimensional female characters who were all one person before they went into prison and became another once inside, fuel the show’s popularity.

"Orange Is the New Black" is the best ongoing evidence that women characters—gay, straight, bisexual, trans, old, young, black, white, Asian, Latina, immigrant, rural, urban, rich, poor, working-class—have specific, complex and compelling stories to tell.  Litchfield doesn't only have heroes and villains, it has a rich trove of anti-heroes, too, like the violent, meth-mouthed self-proclaimed religious prophet Pennsatucky, who is portrayed as worthy of empathy, ridicule and genuine fear. She appears alongside an egotistical activist nun, a trans woman feeling her family on the outside slip away from her, an inmate happily carrying a guard’s baby. The ruthless competition between kitchen gangs, helmed by two middle-aged women who know how to wield their power and influence, could be a show unto itself. These types of stories are rarely presented in an empathetic light to a mainstream audience, but rather than being marginalized for it, the “Orange Is the New Black” team is being rightly celebrated.

Compare television’s wins last night with the current Academy Award race, where last year’s women-centered films made an abysmal showing in nominations for directing, writing and Best Picture. The female stars of “Wild,” “Gone Girl,” “Still Alice” and “Two Days, One Night” are all up for Oscars, but only Felicity Jones, who co-stars with frontrunner Eddie Redmayne in “The Theory of Everything,” has a shot at being part of a Best Picture team. Looking at the nominees, it would seem as though there just weren't as many great women-centered stories to tell on film this year, and it has to be said that the film side of the SAG Awards came to the same conclusions — Michael Keaton vehicle "Birdman" won best ensemble out of a field of male-led films. Meanwhile, acclaimed actresses continue to flock to television for its increasingly rosier prospects—more diversity in storytelling and in casting, for starters, and a wider array of characters to play.

In her Outstanding Actress award acceptance speech, Adubo thanked show creator Jenji Kohan for "putting something like this on television, not just for myself, but for our incredible team of actors to be seen in such a beautiful way." The ensemble win for Kohan's vision and her cast's performance is a win for diversity, but like most victories of its kind, the long game isn't individual honors, but a future awards field that is so balanced a score like this is no longer remarkable.