Kanye's "dad rap" era: Why Paul McCartney could be guiding Yeezy to his musical middle age

With help from Sir Paul, the new 'Yeezus' follow-up could be the dawn of a kinder, gentler Kanye 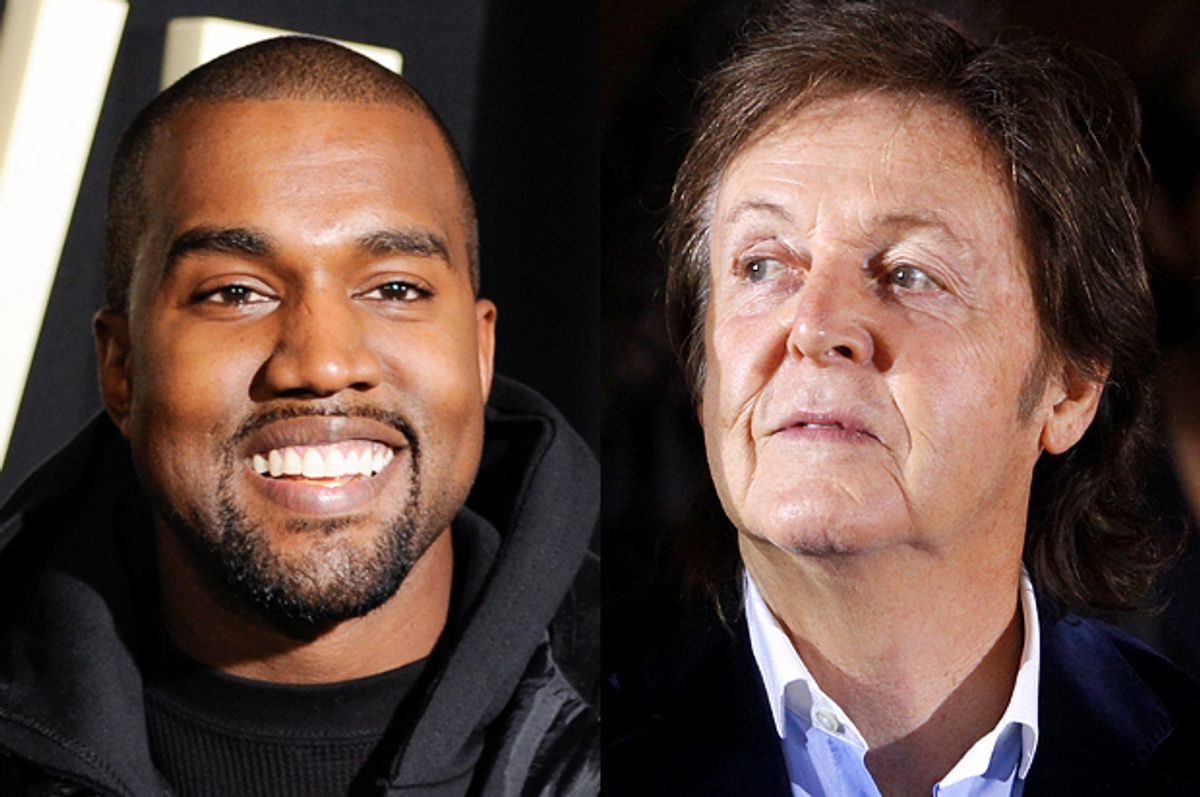 The world was introduced to “FourFiveSeconds” over the weekend, the latest Paul McCartney/Kanye West jam featuring heavy doses of Rihanna. And according to West’s barber (yes, apparently his barber is a reputable source for most music outlets), both Yeezy and RiRi are putting the track on their new albums.

Let’s set aside the question of whether or not this star-studded amalgamation was a bad idea (although after a handful of close listens, it does seem like a pretty bad one). The more interesting question is this: What do “FourFiveSeconds” and Kanye’s other McCartney co-production, “Only One,” say about where Kanye’s career is headed?

The easiest way to divine the future in this regard is to look to the past. Not Kanye’s past, though. McCartney’s bygone days come in handy here. If you connect the dots between the two musical heavyweights, it all becomes clear: Paul McCartney is shepherding Kanye West into his very own “post-Beatles” phase and preparing Ye for his eventual descent into old-man irrelevance.

Once The Beatles unraveled, McCartney spent some time holed up in a Scottish farm with his family. Not long after, he emerged with a self-titled record that eschewed the Fab Four’s signature studio wizardry. “McCartney” was in no small part about how much he loved and cherished his then-wife, the late Linda McCartney. If that wasn’t obvious enough from listening to it, the album’s first cut is titled “The Lovely Linda.” He was no longer Paul McCartney, edgy counterculture icon. Meet Paul McCartney, family man.

Sounds familiar. The press release for “Only One” breathlessly recounts a tender, intergenerational moment in the studio when West channeled his late mother: “When they played back the recording afterward, something remarkable happened. Kanye sat there with his family, holding his daughter North on his lap, and listened to his vocals, singing, ‘Hello, my only one ….’ And in that moment, not only could he not recall having sung those words, but he realized that perhaps the words had never really come from him.”

Add that to West’s somewhat-literally awesome tribute to his wife Kim Kardashian, not to mention his penchant for holiday sweaters and comfy cotton pull-overs, and it’s clear he's headed straight to a new era: dad rap.

(That’s not to say Kanye's “Awesome” is on par with “Maybe I’m Amazed,” but “Stop everything you're doing now/Cause baby, you're awesome” isn’t too far from “Baby, I'm amazed at the way/You love me all the time.”)

It’s important at this point to consider that when “McCartney” finally hit shelves in 1970, it was met with less-than-enthusiastic critical response — Rolling Stone even called it “distinctly second rate.” The album tarnished McCartney’s reputation for a while; his new family-centric image didn’t sit well with fans. While Sir Paul still had some phenomenal songs in him and would have plenty of commercial success, it was the first step in his eventual decline as a zeitgeisty musical powerhouse and innovator.

If history does indeed rhyme, it’s not hard to see Kanye’s upcoming record (which might even feature more McCartney collabs) set the same process in motion. The mixed response to “Only Hope” and “FourFiveSeconds” would seem to indicate that. And sure, it’s too soon to pass such an extreme judgment based on two songs. You know, like 15 years too soon. That said, it lines up.

Skeptical? I was, too — until I recalled a hypothesis submitted by producer Dan the Automator (of Gorillaz, Deltron 3030, Handsome Boy Modeling School, et. al.) during an interview I conducted with him last year. He laid down some solid musical mathematics. According to the Automator, most iconic artists have a nearly identical timeline of musical primacy.

“My estimation of the successful arc is somewhere around seven or eight years for most of these guys. There’s obviously exceptions, but if you look at Prince, his last hot record was probably [1985’s] ‘Around the World in a Day,’” Dan said. “And he started eight years before that with, I guess you’re going with ... [1978’s] ‘For You.’”

The formula works, even if the math is a little fuzzy. Dan had plenty of proofs: Michael Jackson, Run DMC, and LL Cool J were just a few. They all had seven or eight years at the top of their game, at most. Sometimes artists couldn’t even hold the live wire for that long. Go have a few arguments with friends about the prime years of The Kinks, The Rolling Stones, Madonna, Elvis, The Beatles, The Beach Boys, Ray Charles, U2, and countless others. See how it works out.

When word leaked that they were partnering up, plenty of folks painted a vivid picture of McCartney serving as Kanye’s spiritual guide for his next record. I’m not sure the tableau they were envisioning included McCartney as a grim reaper, ferrying Kanye’s career across the river Styx. Depending on where you think he began to peak, Kanye’s either really close to hitting the eight-year mark or already past it. There’s a good chance his work with McCartney is indeed a bird of ill omen.