Meet the CIA's secret protector: Why Sen. Richard Burr is its favorite "overseer"

No, GOP is not going back to its old isolationist ways. Here's why the intelligence community is licking its chops 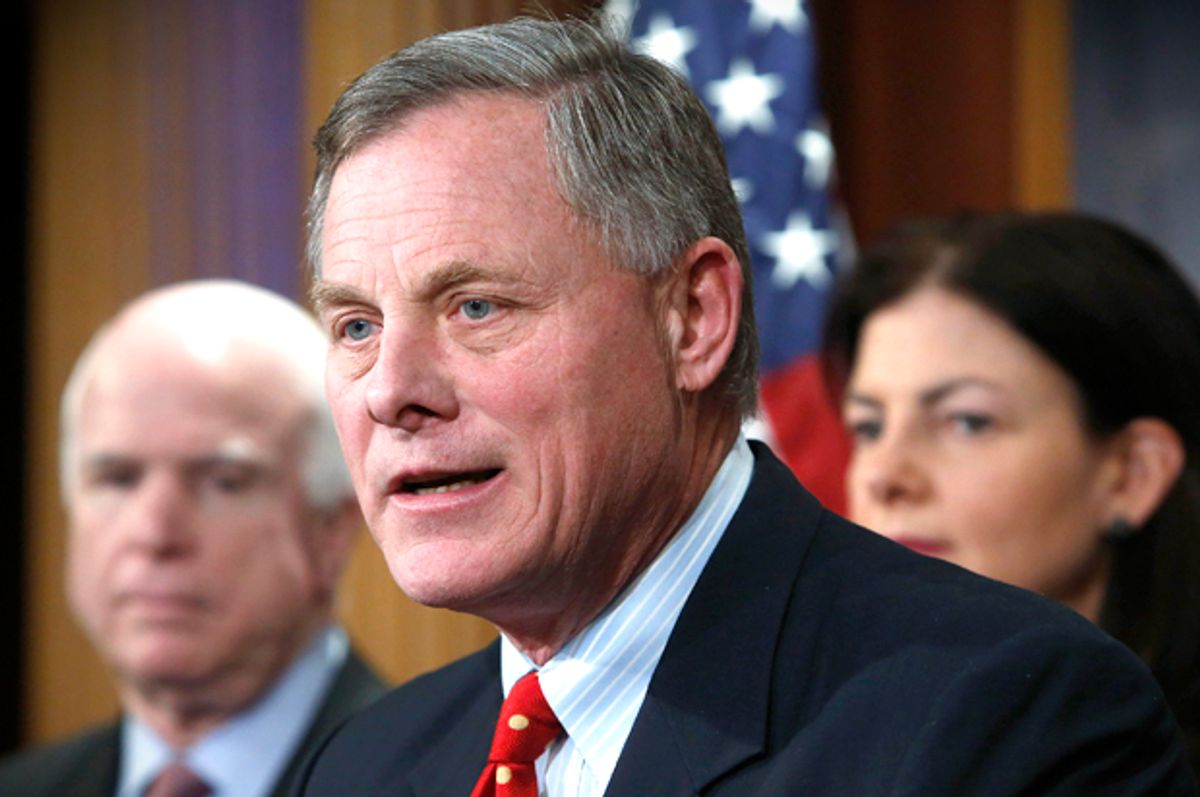 One of the newest pieces of conventional wisdom among the political commentariat is the idea that under the influence of the Tea Party and the libertarians, the Republicans are no longer the national security hawks they once were. They are going back to their old isolationist ways, the thinking goes, because Rand Paul is running for president and he doesn't support military adventurism overseas (except when he does) and the right wing of the GOP is uninterested in national security.

As I have written before, this is a fallacy. And we can see that playing itself out in living color as the GOP Senate's newest committee chairmen take their gavels. Yes, we have seen the embarrassing spectacle of climate change denier James Inhofe being promoted to head the environmental committee and the neo-Confederate anti-immigration zealot Jeff Sessions being named to head a panel on immigration.  But nothing is as astonishing as the Senate's greatest protector of the intelligence services being named the committee assigned to intelligence "oversight."  That would be Sen. Richard Burr of North Carolina.

Burr is very well thought of by the CIA and NSA and for good reason. He has gone out of his way to excuse their behavior at every turn and protest even the slightest amount of criticism offered by the senators tasked with keeping them accountable under the law. Even the tepid oversight of the Democratic Senate was too much for Burr, who is on record criticizing Sen. Feinstein for her speech last March in which she complained about the CIA hacking into the Senate's computers as well as director John Brennan's lack of cooperation. He said,“Dianne may have some problems with it but I think we’ve gotten a full accounting of what happened. I think there’s some mistakes but I don’t think it’s the first director that’s made mistakes.” Now that's oversight.

He subsequently excoriated Former Colorado Sen. Mark Udall for sending a letter to President Obama asking for the release of the torture report, implying that he'd leaked classified information. Worst of all, perhaps, is Burr's contention that the torture techniques led to the killing of Osama bin Laden, which was proven in the torture report to be false.

When he assumed the chairmanship of the Senate Intelligence Committee at the beginning of the month Burr  assured his supporters back home that he was not going to look in the rearview mirror and revisit the notorious torture report that had been released by his predecessor on the panel, Dianne Feinstein, in the closing days of the last Congress.He wants to start the "overseeing" fresh.

But it's an understatement to say that  Sen. Burr is a very curious choice to be an "overseer" for the CIA if the Republican Party is now our greatest champion of civil liberties. He's never seen a CIA program he didn't think was just ducky. And it looks as though he's not just going to continue to turn a blind eye to CIA perfidy, he may have a plan in place to ensure that the torture report is thrown into the memory hole never to be seen again.

Katherine Hawkins of OpenTheGovernment.org explains that going all the way back to December of last year Burr was making an arcane argument that the classified report is part of the congressional record and therefore exempt from request under the Freedom of Information Act  and Guantánamo defense attorneys (an argument supported by the administration as well).  Through a series of letters from Dianne Feinstein and the White House and subsequent letters by Sen. Burr, those who wish to deep-six the torture report have engaged in various actions that will challenge the ability of any judge or any government official who wants to release the full report. Hawkins believes this will not work, although she is less sanguine about other gambits having to do with the so-called Panetta Review that would likewise shine a light on the full scope of the torture regime. This is also based on some very byzantine reading of the law in which Burr and his allies in the administration assert that the Congress should have never seen the report in the first place, so it should go back to the CIA where they will presumably burn it in the same bins in which they burned the tapes of the CIA torture sessions.

This is what we call "congressional oversight." It works so well, everyone is clamoring for more of it.

However all that is eventually resolved, what this first skirmish in the new Congress shows is just how far the Republicans will go to protect the intelligence community, even if it means being in cahoots with their greatest enemy, President Obama. Anyone who thinks that the new Congress is going to be more confrontational with the military and intelligence establishments needs to think again. The oversight committees under the Democrats were hardly present during the past six years. It will be a miracle if the Republicans even decide to meet.  Why bother?