Climate denial gets a billion-dollar boost: Why the Kochs' 2016 spending spree could mean planetary disaster 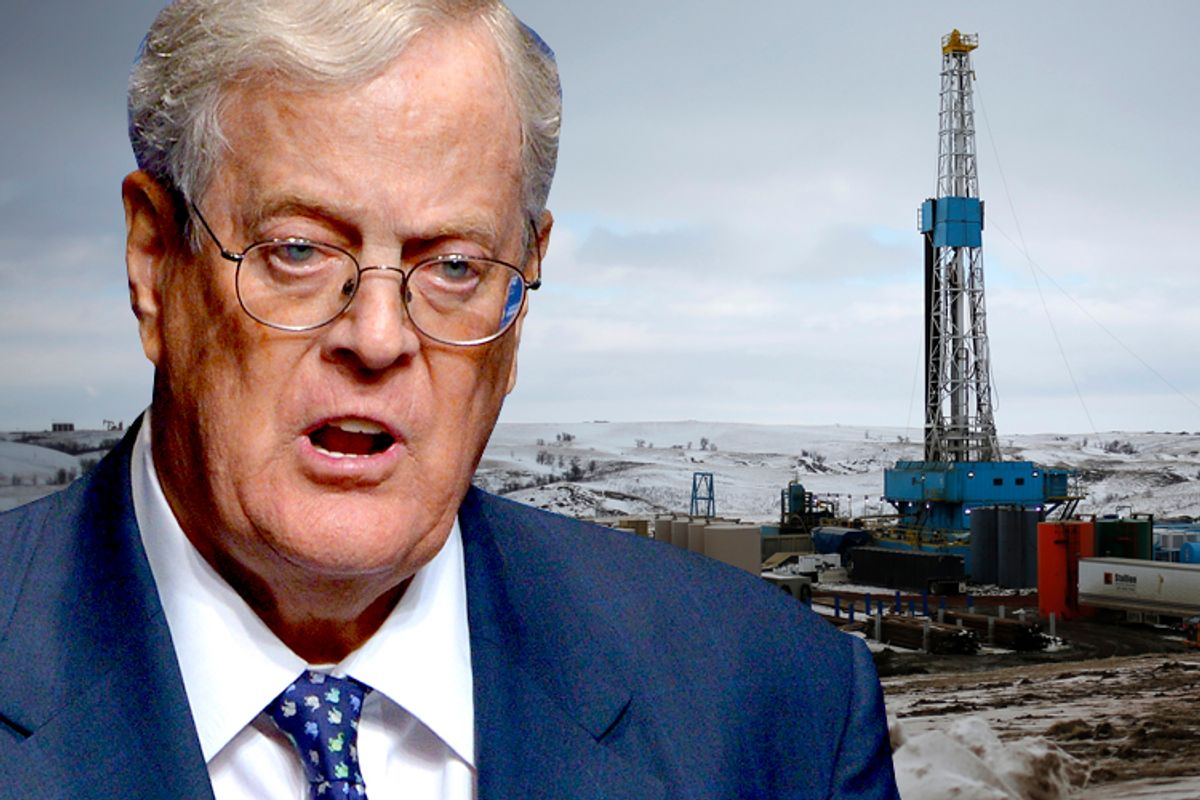 The news that the Koch brothers' plan to funnel nearly a billion dollars into the 2016 elections is bad news for anyone who cares about the outsized role of money in politics, for anyone who doesn't want to see an American dominated by Republicans, and definitely for anyone who plans to keep living on this planet.

It's what Joe Romm at Climate Progress calls "a declaration of dependence on fossil fuels, a figurative declaration of war on a livable climate and the health and well-being of countless future generations" and my colleague Elias Isquith describes as an effort to "design a right-wing machine to dominate American politics in the near- and medium-term future" -- which, if successful, will be more than enough time to set Earth on an irreversible path to catastrophic climate change.

This is not really an exaggeration. The yearlong project of hundreds of scientists to assess the current state of climate change concluded that its impacts are already being felt “on all continents and across the oceans,” and that we're increasing our chances of experiencing “severe, pervasive and irreversible” consequences the more we continue to emit greenhouse gases. The absolute best-case scenario would be for us to reach peak emissions by the end of this decade, and abandon them entirely by the end of the century. That's going to require the kind of effort that should have started decades ago, and, at this late hour, a near-Herculean push for major reform. We've literally run out of time for climate denial.

And yet climate denial is one of the many products of Koch Industries, which a 2010 Greenpeace report identified as a "financial kingpin of climate science denial and clean energy opposition." Since at least 2005, both the company, its foundations and the Koch family itself have spent millions quietly influencing the climate debate, often in insidious ways: a typical example has the Charles G. Koch foundation funding a climate denying scientist to write a flawed study undermining previous studies about the risks climate change poses to polar bears, which was then broadcast on the websites of other Koch-affiliated groups. The entire "ClimateGate" non-scandal, as another, was hyped by at least 20 different Koch-funded groups as a coordinated attempt to cast doubt on climate scientists. At a time when the majority of moderate Republicans say they believe that climate change is happening, and Republican leaders struggle to find a way to deny basic science without being mocked, the Koch billion could help make denial acceptable again.

As Romm points out, the Kochs' mission goes well beyond preventing future action on climate change -- they're dead-set on reversing every modicum of progress we've made so far. That extends to renewable energy policies of the sort that are climate friendly but also solidly bipartisan -- the sort of thing even Iowa's Tea Party Senator Joni Ernst can get behind. Yet what Koch-affiliated groups like ALEC and the American Energy Alliance manage to do is take policies that save jobs and strengthen (clean) energy security and make them all about President Obama's agenda: any show of support for clean energy, goes their pro-fossil fuel line of reasoning, is a direct endorsement of climate action/the existence of climate change, and thus cannot be tolerated.

That viewpoint contradicts the 46 percent of Tea Party Republicans told the Yale Project on Climate Communication that they support tax rebates for people who purchase energy-efficient vehicles and solar panels. And it goes against the majority of Americans that surveys show support government regulation of carbon emissions -- yet another thing that the Kochs have dedicated their money to preventing. The Koch way forward only has room for that which serves the Kochs' fossil fuel-powered self-interest, and, if we let it, their new spending push is going to go far toward ensuring that we'll keep on denying that climate change is a problem, until it grows so big that no amount of money will be able to convince us it's all a hoax. By that point, of course, it'll also be too late.