Mitt's "Tricky Dick" problem: Why his anti-poverty sham is so Nixonian

One candidate had a "secret plan" to end an unpopular war; another brings vague promises of eradicating poverty 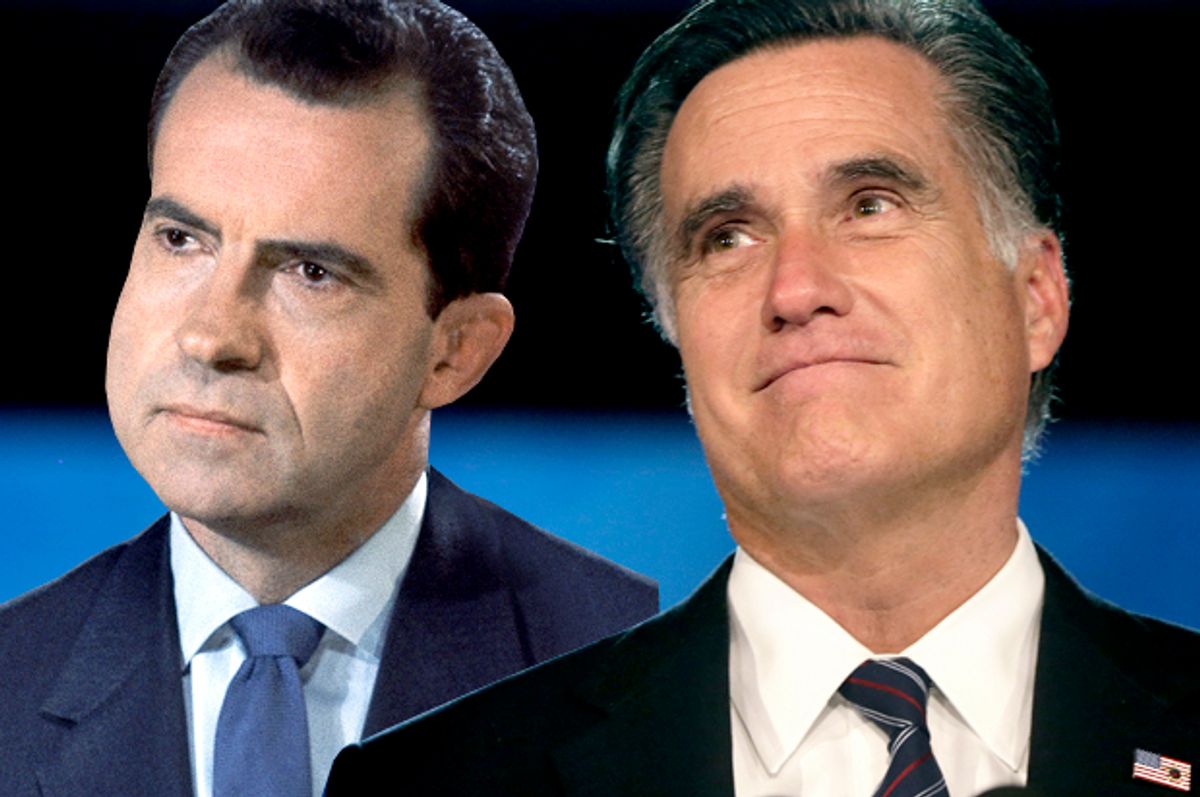 Two weeks ago, as word came that Mitt Romney would make eradicating poverty a central theme of his potential 2016 presidential campaign, I couldn't help but think of Tricky Dick. As with our 37th president, whose boosters touted a "New Nixon" in 1968 -- undaunted by the simple fact that the candidate had already undergone political facelifts in virtually every election since he entered the national stage -- you can trace Willard Mitt Romney's political evolution by following his endless reinventions. You could go all the way back to Romney's days as a liberal Republican candidate in Massachusetts, charting the gradual development of a "severely conservative" GOP standard-bearer. Or, to simplify things a bit, you could follow David Graham's approach and look at the three iterations of Romney to emerge in his 2008, 2012, and 2016 campaigns. In 2008, Romney Inc. rolled out Mitt 1.0, who presented himself as the true conservative in the GOP race. Come 2012, it was time for Mitt 2.0, the whiz kid who right the nation's economic ship. Should Romney proceed with plans to run for president next year, we'll meet Mitt 3.0, the anti-poverty warrior.

Sensing mounting unease with gaping economic inequality, Romney's speeches now pay tribute to voter concerns about the nation's uneven economic recovery. “Under President Obama the rich have gotten richer, income inequality has gotten worse and there are more people in poverty in American than ever before,” the former Bain Capital CEO (net worth: approximately $250 million) told a GOP gathering in San Diego this month. No longer does Romney denigrate the "47 percent" of Americans who could never be convinced to "take personal responsibility and care for their lives." Whereas he once said that his job was "not to worry about those people," Romney would like the voters of 2016 to know that he's very worried about "those people."

“We need to lift people out of poverty,” Romney will say this evening at Mississippi State University. “Almost every week during my campaign, I met folks who had fallen into poverty as the result of an unfortunate event, like losing a job.” Never mind that during that campaign, in 2012, Romney pronounced that he was "not concerned about the very poor," given that those lucky duckies enjoyed the benefits of the social safety net. Now, Romney aims to use the power of the presidency to lift the fortunes of the disadvantaged and downtrodden.

But what, precisely, would Romney do? As the Boston Globe reports today, the serial candidate isn't offering specifics. In his Mississippi speech tonight, Romney will lambaste "liberal policies" for failing to eliminate poverty and call for a new, conservative approach to the issue.

“For fifty years and with trillions of dollars, Washington has fought the war on poverty with failed liberal policies. They haven’t made any headway whatsoever. It’s finally time to apply conservative policies that improve America’s education system, promote family formation and create good-paying jobs," the former Massachusetts governor will say.

A few things: Yes, the scourge of poverty remains all too real, more than 50 years after President Lyndon Johnson announced that he would wage war on it. But to assert that the war on poverty "failed" betrays either intellectual dishonesty or historical ignorance. During Johnson's Great Society, the poverty rate dropped from 22.2 percent in 1963 to 12.6 percent when Johnson left office in 1969 -- a 43 percent reduction. If Romney and Co. truly wish to argue that we'd be better off without Great Society programs like Medicare, Medicaid, and increased federal support for education, they're welcome to do so; the empirical record, alas, does not speak kindly to such arguments.

So Romney still insists that the war on poverty was a miserable failure. Fine. Let's willfully suspend disbelief, pretend that he's right, and consider the question of whether his conservative alternative would be better.

That alternative, you ask? Well, er...

Republican Mitt Romney on Wednesday was expected to visit the poorest state in the union and renew his call for a national fight against what he calls “chronic” poverty, although he has yet to provide details on how he would lead such a fight.

Romney will blame a failure of ``liberal policies’’ and say America needs to pursue conservative solutions to fighting poverty, but he does not say which conservative policies he favors, according to the prepared statement.

Romney will expand slightly on his prior efforts to focus on anti-poverty policies, but his address mostly outlines a litany of problems, without providing any solutions. [emphasis added]

So there we have it! Romney is truly, deeply, sincerely concerned about the plight of America's poor, and as president, he'll work to improve their lot. We'll just have to wait and see what that would entail.

It all sounds awfully familiar.

And so we return to Richard Milhous Nixon. During his 1968 presidential run, Nixon suggested to voters that he had a secret plan to end war in Vietnam, on which the Americans had decisively soured followed that winter's Tet Offensive. Although Nixon never used the phrase "secret plan," he conveyed both privately and publicly that he was prepared to bring the conflict to a peaceful resolution. The GOP candidate maintained backchannels with anti-war critics, assuring them that upon his inauguration he would convene a summit with the Soviet Union to negotiate an end to the war and "de-Americanize" the conflict. Publicly, Nixon assured Americans that he would bring an end to the war, although he avoided specifics; Nixon could take care of that highly sensitive business come January 20, 1969.

Nixon did, of course, usher in "Vietnamization," the process whereby American forces gradually withdrew and gave greater responsibility to South Vietnamese forces in their fight against the Viet Cong. But Nixon simultaneously escalated the war, bombing Cambodia and Laos despite lacking congressional authorization to do so and leading to thousands more lives lost; had Americans known this aspect of Nixon's "secret plan," they may not have awarded him the narrow victory he won in 1968.

Nearly half a century later, we once again encounter a candidate whose core conviction seems to be that the country needs him as president, and who has no problem adjusting to changing political currents, if that's what winning the top job requires.

Perhaps Romney has some impressive anti-poverty tricks up his sleeve, but I'd advise against betting on it; like Nixon confronting a war-weary public, Romney sees an electorate beset with anxieties about inequality and upward mobility, but he offers voters nothing more than vapid platitudes about job creation and opportunity -- the standard conservative playbook. Until he moves beyond that, let's call Romney's anti-poverty crusade the Nixonian sham that it is.