The 2016 race is on: Scott Walker and Ted Cruz win the Steve King primary

The far-right immigrant-basher boasts of his new influence in his party, and sadly for moderates, he’s right 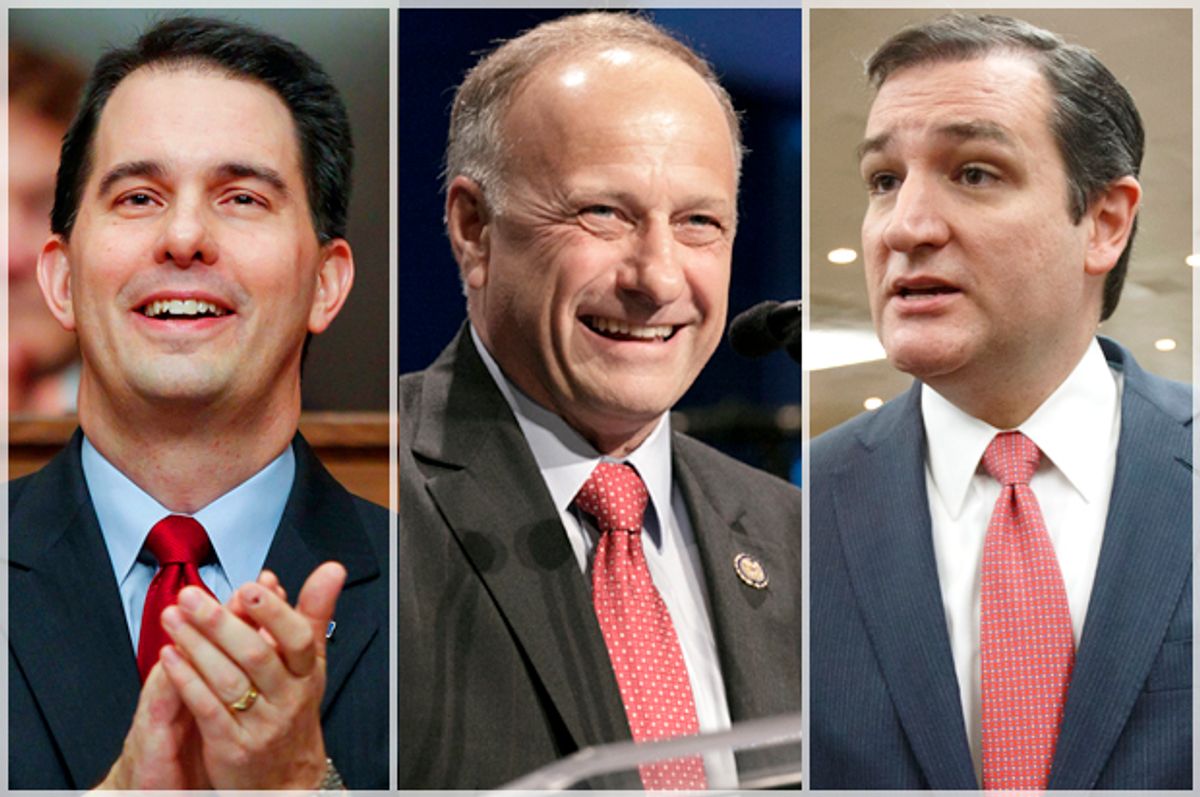 Self-promoting wingnut immigrant-basher Rep. Steve King invited most of the 2016 GOP hopefuls to his "Iowa Freedom Summit” last weekend, and now the results are in: Wisconsin Gov. Scott Walker and Texas Sen. Ted Cruz won the Steve King primary, according to Steve King.

Of course, that doesn’t mean he’s endorsing either of them right now, it’s just his humble view of how they did at his all-important conservative confab.

"I think Ted Cruz had the highest bar to reach, and I think he cleared that bar,” a confident King told Bloomberg’s Dave Weigel. “I don't know how much greater than expectations it was, but he at least met and then exceeded expectations… Probably the person who helped himself the most would be Scott Walker. The bar wasn't as high, and he gave a good speech. He connected with the audience in a good, constructive way.”

Some Republicans know they have a Steve King problem: to their credit, Mitt Romney and Jeb Bush stayed away from his “Freedom Summit” last weekend. In fact, it’s the kind of event Bush was talking about when he opined late last year that to win the White House, a Republican candidate had to be “willing to lose the primary to win the general.” Translation: Don’t pander to your far-right fringe so much that you scare away swing voters later.

Of course, while that sounds uplifting, it’s literally impossible, at least the way we currently pick presidents.  The loser of the GOP primary will not face off against the Democratic nominee in 2016, so as a political strategy, Bush’s wisdom falls short.

Still, the sight of 10 or so GOP hopefuls traipsing to kiss King’s ring has to disturb Republicans hoping to win the White House again. Just a decade ago, the idea of the right-wing anti-immigrant crusader as some sort of kingmaker, no pun intended, would have seemed far-fetched. It’s not just that he is on the fringe when it comes to his views on immigrants. It’s that he’s just so nasty about it, calling undocumented immigrants “deportables” and famously insisting many have “calves the size of cantaloupes” from carrying drugs across the border. (I still want to know how he got up close and personal enough to examine the cantaloupe-sized calves of immigrant men; did he squeeze them?)

Because seriously, in all the futile GOP soul-searching that went on in 2013, there was at least broad concern about the tone of the party. No, there wasn’t a lot of smart thinking; there was no realization that the reluctance of African Americans, or Latinos, or single women, or gay people has to do with the party’s increasingly right wing policies, and that those policies might have to be changed. Yet there was concern, from Reince Priebus on down, that maybe the party shouldn’t talk so horribly about people it might someday like to vote Republican.  Clearly, King didn’t get that memo.

As Salon’s Jim Newell observes, King would just be another Louie Gohmert – a back bencher given to colorful, bigoted outbursts – if he didn’t hail from Iowa, whose caucuses have gained such influence as the party decides who will be the strongest candidate of social conservatives. Even the scandal-damaged, formerly moderate Chris Christie thought he had to show up and brag about how “pro-life” he is.

Mainstream reporters seemed to agree with King: Scott Walker won the weekend. But the Wisconsin governor may find that boasting about defunding Planned Parenthood in his state was a great applause line with Steve King’s friends, but will turn off moderate women in droves come November, 2016 (if he gets that far.)

Despite what Jeb Bush hopes, you really can’t lose the GOP primary and win the White House, as things stand now. But you may not be able to win both, either.