"Broad City" and the City: 10 ways you know you live in Abbi and Ilana’s New York 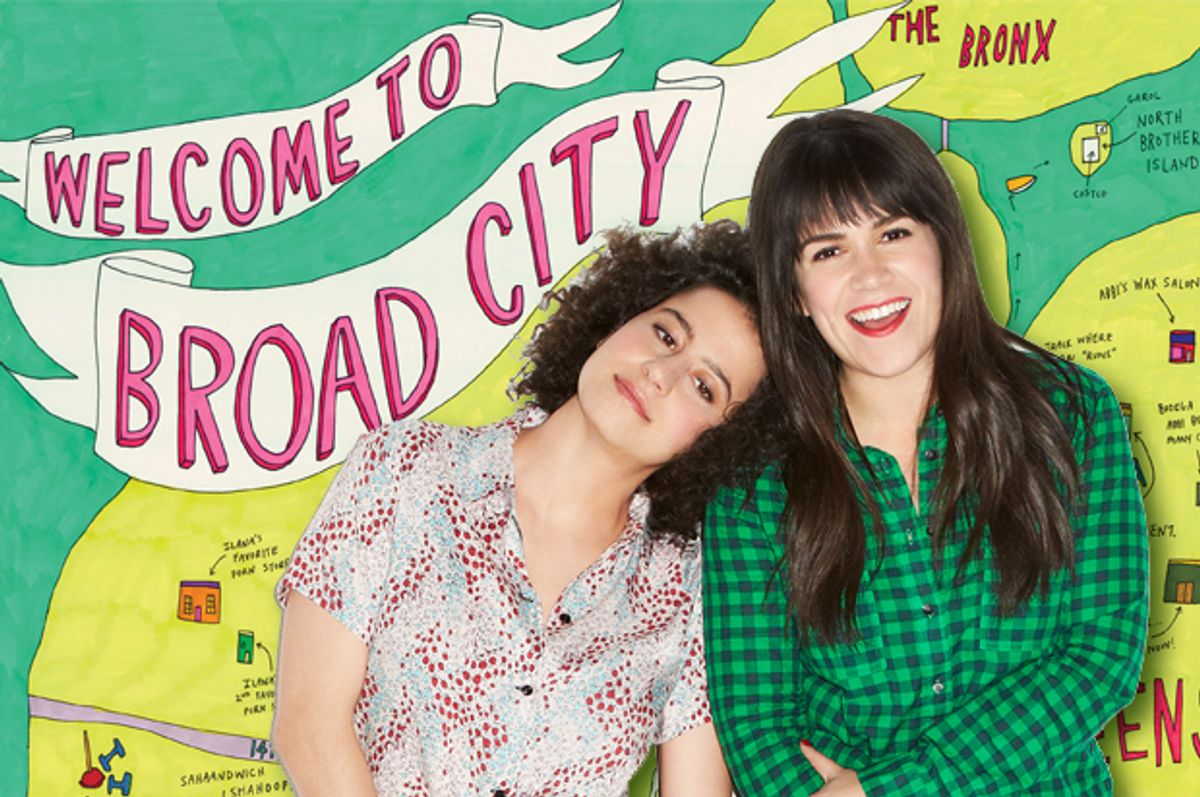 When “Broad City” stormed, spliff in hand, bellybuttons exposed, onto our screens last year, it was lauded for its fresh depiction of life in New York City. There are few shows that make use of the metropolis, with all its myriad idiosyncrasies, as fruitfully "Broad City" does. To Abbi and Ilana, the city is a vivid staging ground for their antics, a hellscape and wonderland in equal measure (and often both on the same block).

"Broad City" doesn't strive for verisimilitude -- it views the city through a kaleidoscopic lens, magnifying and warping its eccentricities -- yet in a way that, paradoxically, feels more representative of city life than anything else out there. As Flavorwire writer Pilot Viruet wrote: “it isn’t the first show to explore New York City, but it’s the first to explore the New York City that I live in. 'Broad City' understands the small frustrations and intricacies of NYC living." Here’s how you know you live in the same New York as Abbi and Ilana:

1. New York in the summer is a schvitzy hellhole
While Big Apple-set romantic comedies may delude people into thinking that summer in the city is all about floral sundresses and Central park foliage, your experience of the city in August is better encapsulated by the image of Seth Rogen stuffing paper towels down his ass-crack. At one point or another, you have seriously considered murdering someone for their air conditioner.

2. The subway is a horrifying Petri dish
The scene in which Abbi and Ilana take a "Snowpierecer"-esque voyage from the front of the subway to the back and see all manner of hellish things is not a surprise for you. On your daily commute this morning, you saw one of the following:  a man cutting his toenails, a mother giving her son a haircut, a family sharing a party-sized sub, a couple engaging in aggressive PDA, breakdancing, a car full of Orthodox men or a woman eating alone in an empty subway car with a turd on the floor.

3. Penn Station is gross, but it has its perks
After they miss their train at Grand Central (which is pretty majestic, BTW, if you stop and look) Abbi and Ilana have to go to Penn Station, which is the last straw for Abbi’s date. As he says, “I can’t. It’s disgusting. It’s kind of a deal breaker for me.” This may seem like an overreaction, but you totally get it — Penn Station is freaking gross. (Although it does have great sushi)

4. Lord have mercy on any soul who must pick up a package outside the city limits
Riding the subway to the end of the line, taking a bus to a dinghy full of creepy sets of twins, walking amidst the ruined foundations of an old building, going past the Costco, and finally ending up in a deserted warehouse guarded by a woman named Garol -- this is exactly what happened when you went the Maspeth UPS center to pick up the birthday present your aunt sent you.

5. Finding a apartment in New York is the most frustrating thing ever
Moving apartments is one of the most frustrating, demeaning, soul-crushing experiences that any New Yorker has to go through. If you've ever been through that tortured rodeo, you know that “railroad style apartment” is code for a single hallway with no bathroom, while anywhere that looks too good to be true is probably an active crime scene. Plus, you can totally relate to the experience of having a creepy broker with a penchant for dolls made out of human hair try to upsell you with lines like “It’s a pre-war building … built right after the Iraq War."

6. Nowhere is worse than the Upper East Side
The Upper East side of sleek-maned carriage horses and old-world glamor is not a real thing. The Upper East Side is a horrible, vapid wasteland that you should avoid at all costs, unless you want to hear women in silk-neckties talking about how many of their horses died this year, or get asked repeatedly where the Met is. You would rather go to Penn Station than go to the Upper East Side.

7. You wouldn't be caught dead in Times Square
What self-respecting New Yorker goes to Times Square? None. The answer is none.

8. You have been to a pretentious Soho rooftop party where you felt totally out of place
Even if you don't have much in common anymore with your hot rich college friend Parker, and even if you have no idea what cause the party is suppoting ("change," probably) who are you to turn down free global-catastrophe-themed cocktails and mac and cheese balls fried in truffle oil? Girl's gotta eat, right?

10. The Chinatown bus is terrifying
Taking the Chinatown bus is a cheap way to get to a wedding in Connecticut if you've exhausted all other options, but there is an 80 percent chance you will get a tub of rancid fish guts spilled on you. Sometimes, it's just better to stay home.