Bad idea: Shell's gearing up to start drilling in the Arctic again

Despite major risks and the dropping price of oil, the company plans to resume oil exploration this summer 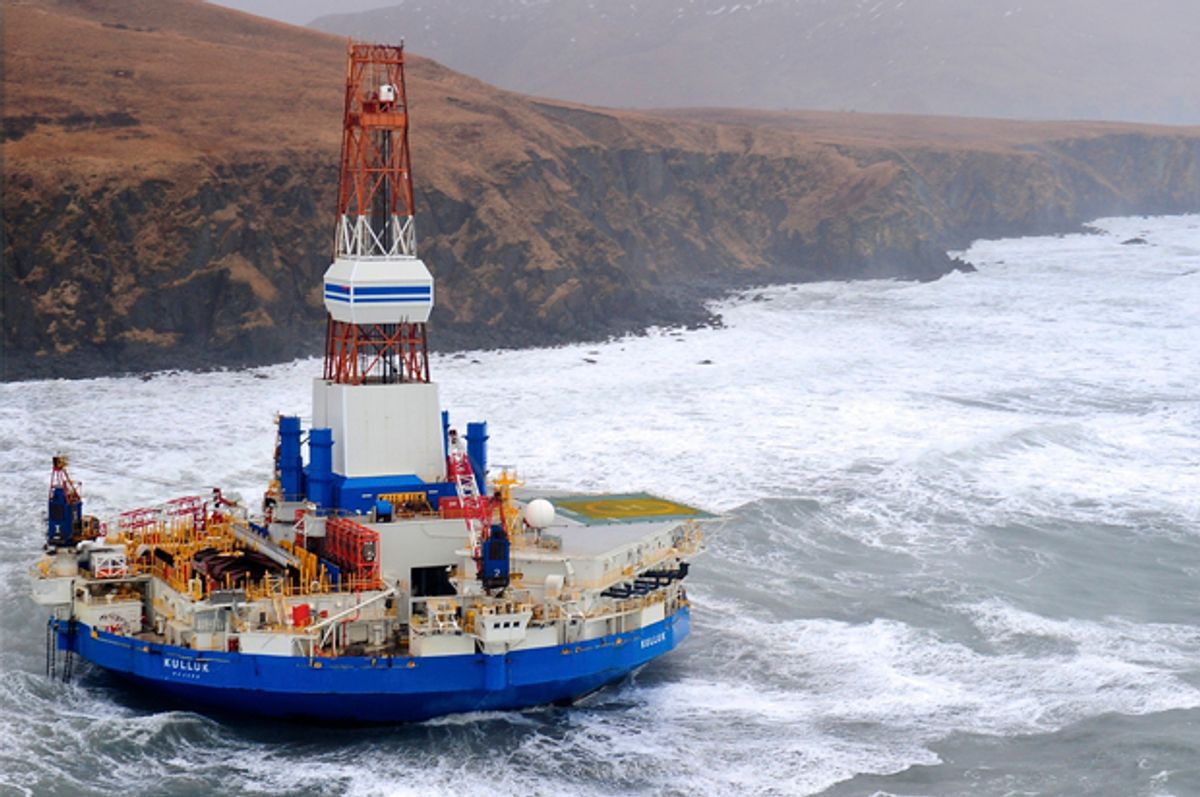 Neither risk of an oil spill nor global climate change nor the falling price of oil will keep Shell from exploiting the Arctic's oil.

After suspending its Arctic program for years following the grounding of one of its drilling rigs, the company announced Thursday that it plans to start drilling this summer in Alaska's Chukchi Sea.

"Will we go ahead?" CEO Ben van Beurden said during the company's fourth quarter results conference. "Yes if we can. I'd be so disappointed if we wouldn't."

It's a perplexing decision. For one thing, Arctic drilling is an inherently risky activity, and Shell has a poor track record of getting it right. And even when it is done right, says Mackenzie Funk, who reported an in-depth e-book on the company's 2012 Arctic fiasco, it's incredibly expensive. "Simply the practicality of getting giant rigs up there, the practicality of getting oil from that far away from the rest of us to market is a huge, huge undertaking," Funk recently told Salon.

"We will only do this if we feel that we can do it responsibly," van Beurden told the BBC, adding, "I think that we are as well prepared as any company can be to mitigate the risks." But Funk's take on Shell's prospects for safe drilling basically came down to whether the company's going to be willing to invest enough money in the project to do it right. Seeing as how the announcement comes at a time when the price of crude oil is at a six-year low, it's hard to imagine how they expect to do both that and profit at the same time.

Shell already plans to cut spending by more than $15 billion over the next three years due to dwindling revenues. Despite that, "Shell hasn't taken the opportunity to cut its most high-cost high-risk project," Greenpeace's Charlie Kronick said in a statement. "It's time for investors to recognise that it's impossible for Shell to justify its continued pursuit of offshore Arctic oil."

In the same meeting, moreover, Shell made the unprecedented decision to back a resolution from "activist shareholders" to analyze whether its business model is compatible with the global effort to limit warming to 2 degrees Celsius. To reach that goal, scientists say, we're going to have to leave three-quarters of our remaining fossil fuel reserves in the ground -- and, according to a major study recently published in the journal Nature, that includes all of the oil and gas in the Arctic.

So what gives, Shell? According to Chief Financial Officer Simon Henry, the company's already invested $1 billion preparing to tap the Arctic, and just keeping things operational since the moratorium has cost it several hundred millions more each year. But even if that's enough for it to decide it's worth it to go ahead and drill, it still has a number of legal hurdles to overcome, chief among them being the ruling of a U.S. federal appeals court, last January, that the Interior Department's sale of Chukchi Sea leases back in 2008 didn't take sufficient account for the environmental risks posed by drilling. A final environmental impact statement is due out soon; in the meantime, federal regulators are informally reviewing the company's drilling plans.

The environmental group Friends of the Earth, meanwhile, points to the absurdity of the $10 billion in U.S. subsidies (that's the low-ball estimate) from which Shell partakes each year. "The last thing the Arctic needs is an invasion from Big Oil, and the last thing those invaders deserve are taxpayer dollars," Lukas Ross, the group's climate and energy campaigner, said in a statement. "Shell’s dismal record of accidents and safety violations demonstrates an inability to operate in the unpredictable Arctic waters. If we are going to avoid climate catastrophe we must make the Arctic off limits to drilling."